THE 9/11 ATTACKS 12 YEARS AGO are remembered today by the flying of all State of Hawai`i and United States flags at half staff at all state offices and agencies as well as the Hawai`i National Guard - sunrise to sunset, says a statement from Gov. Neil Abercrombie.
Pres. Barack Obama proclaimed Sept. 11 as Patriot Day and National Day of Service and Remembrance, calling for the U.S. flag to be flown at half-staff. The presidential proclamation states:
“… On September 11, 2001, amid shattered glass, twisted steel, and clouds of dust, the spirit of America shone through. We remember the sacrifice of strangers and first responders who rushed into darkness to carry others from danger. We remember the unbreakable bonds of unity we felt in the long days that followed – how we held each other, how we came to our neighbors’ aid, how we prayed for one another. We recall how Americans of every station joined together to support the survivors in their hour of need and to heal our Nation in the years that followed.
“Today, we can honor those we lost by building a Nation worthy of their memories. Let us also live up to the selfless example of the heroes who gave of themselves in the face of such great evil. As we mark the anniversary of September 11, I invite all Americans to observe a National Day of Service and Remembrance by uniting in the same extraordinary way we came together after the attacks. Like the Americans who chose compassion when confronted with cruelty, we can show our love for one another by devoting our time and talents to those in need …”
Sen. Mazie Hirono joined her colleagues on the steps of the U.S. Capitol for a remembrance ceremony this morning and issued this statement:.  “Twelve years after the Sept. 11 attacks against our nation, the memory and pain of that day is still very fresh. Like many in Hawai`i, I remember hearing about the attacks that morning and being deeply moved by stories of first responders who flooded into the burning buildings, families searching frantically for missing relatives and regular people on the street who banded together to help the search and rescue efforts. I was reminded of these brave, selfless people when I visited the National September 11 Memorial & Museum in New York City earlier this summer. Looking at the memorial, it is impossible not to think about those who died in the brutal attacks, the firefighters, EMTs and policemen. In the wake of immense tragedy, our nation came together with unity and aloha, resolving to rebuild and bring the perpetrators to justice. Let us once again come together to remember those who were lost and the emotions that swept through our nation that day.”

KA`U’S COUNTY COUNCIL MEMBER Brenda Ford met with constituents at Pahala Community Center Monday regarding issues from Ka`u’s need for a dialysis center, public restrooms and upgrades to Pahala Community Center to bus service, the status of Kawa and her opposition to GMOs and fracking.
Ford said she understands the need for a dialysis center in Ka`u and will work to convince the state of that need. She said it is harder for those living on the other, smaller islands, to understand how far it is to drive from Ka`u for such services. She plans to introduce a resolution to the County Council that can, if approved, be sent to the state Legislature. She also plans to work with west Ka`u Sen. Josh Green on the issue. Green is a physician.
Ford plans to work toward upgrades for Pahala Community Center. She noted a need for fans, new tables and termite treatment.
Residents brought up Ka`u’s public restrooms. They discussed the need for restrooms in Pahala since the restaurant closed down and the hospital began locking the ones there. Several residents also said the restrooms at Punalu`u need improvements.
When a resident brought up being passed by when waiting for a Hele On Bus, Ford acknowledged problems with the system. Ford is chair of the Committee on Public Safety & Mass Transit. She said that since the Department of Education cut back school bus service and raised fees, many students have resorted to taking Hele-On buses, causing them to fill up and the bus drivers passing by other people who are waiting for the bus. She said it is an islandwide problem that needs to be addressed. Vanessa Guy, of Wood Valley, suggested the possibility of exterior advertising on the buses as a way to raise funds to purchase more buses.
Regarding the status of Kawa, the famous surfing and wetlands area which the county purchased, Ford said she doesn’t expect it to ever be developed as a park with its abundance of archaeological sites. S. Reha, of Wood Valley, said she would like the shoreline to once again be accessible by vehicle to surfers, who currently have to carry their boards from the highway parking area. Bobby Gomes noted that the dirt road on the Na`alehu side of Kawa is open for vehicles but does not take drivers right down to the surf spot.
Ford discussed her bill banning genetically modified organisms, saying she “does not want to be a guinea pig” and expressing concern that the “shotgun approach” of current technology is not advanced enough to prevent problems. When fellow Council member Margaret Wille withdrew an anti-GMO bill that she had introduced, Ford introduced her own version, but it was given a negative recommendation by the Committee on Public Safety & Mass Transit. It will go for a vote before the full Council, but Ford expects that she will be the only member to vote for it. Wille’s bill, which grandfathers in GMO papaya, is still alive in the council. Ford's bill would have banned all GMO grown foods here, including papayas, giving farmers 30 months to switch over to non-GMO varieties. Ka`u senators Josh Green and Russell Ruderman have both called for GMO labeling at the state level.
Ford said that more than 90 percent of the island residents she has talked to want the island to be GMO-free. She also said non-GMO crops are economically viable because markets, such as Japan, want them.
Fracking is the topic of another bill Ford is introducing. It would ban the practice of hydraulic fracturing, a process that uses pressurized liquid injected into the ground in order to extract resources, usually fossil fuels. Ford said she is concerned about the possible use of fracturing in geothermal energy development on Hawai`i Island and contamination of the island’s drinking water supply by chemicals used in the process. She said there is a 30 percent failure rate in containing chemicals. “I’m not against geothermal, and I’m not against drilling,” Ford said.

ESTHER PUAKELA KIAAINA is the chosen nominee by Pres. Barack Obama to serve as the Assistant Secretary for Insular Areas at the U.S. Department of the Interior.
Gov. Neil Abercrombie applauded the appointment: “Esther brought a tremendous amount of knowledge, experience and enthusiasm in serving as First Deputy of the Hawai`i Department of Land and Natural Resources. While she will be sorely missed here as part of the DLNR ohana, Esther’s personal and professional background on Capitol Hill, Hawai`i, and the Pacific Islands will make her the strongest possible asset to the Interior Secretary.”
When confirmed by the U.S. Senate, Kiaaina will lead the Department of Interior’s efforts to coordinate federal policy for Guam, the Commonwealth of the Northern Mariana Islands, the U.S. Virgin Islands, and American Samoa. She will also have the responsibility to administer and oversee federal assistance to the Federated State of Micronesia, the Republic of the Marshall Islands and the Republic of Palau. For more information on the Office of Insular Affairs, visit: http://www.doi.gov/oia/
Kiaaina ran to become the congresswoman to represent Ka`u and rural Hawai`i but was defeated by Tulsi Gabbard during the last election. She also worked for Sen. Dan Inouye, Sen. Dan Akaka, and Rep Ed Case. She was a Land Asset Manager for Kamehameha Schools and worked for the Office of Hawaiian Affairs.
She graduated from Kamehameha School, University of Southern California and George Washington University Law School and received an MA from John Hopkins Schoolf of Advanced International Studies.

A STAFF MEMBER FROM U.S. REP. TULSI GABBARD’S office meets with Ka`u constituents today until 4:30 p.m. at Pahala Public & School Library to assist with casework and other issues.  For more information, contact Blaise De Lima at  blaise.delima@mail.house.gov or  808-987-5698. 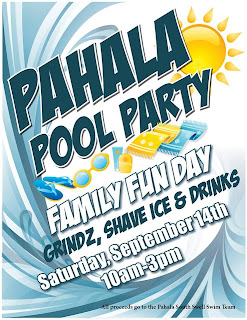 KA`U HIGH’S BOWLING TEAM travels to Hilo Lanes on Saturday to take on Kea`au and Waiakea.

PAHALA POOL PARTY from 10 a.m. to 3 p.m. this Saturday will raise money for the Pahala South Swell Swim Team. The funding will help send the 21 swimmers to meets in Hilo, Kona and Pahoa. The Pool Party at Pahala swimming pool features food, shave ice and drinks. For more call the pool at 928-8177.

TICKETS ARE STILL AVAILABLE for the first Harvest Festival at Volcano Winery this Sunday from 4 p.m. to 7 p.m. Call 967-7772 or see www.volcanowinery.com 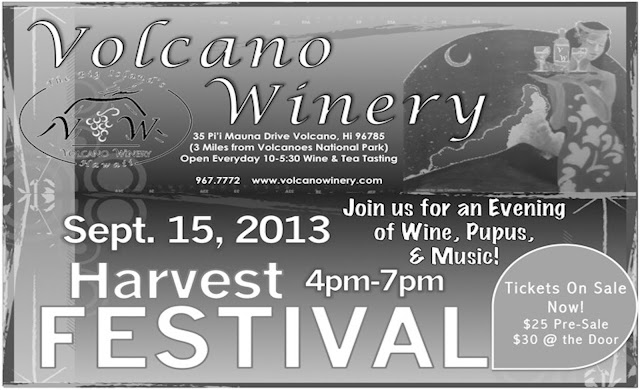 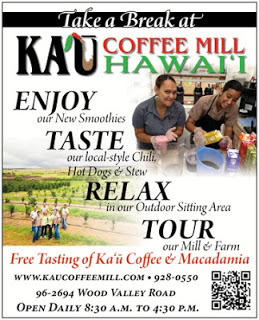