THE MOBILE MEDICAL VAN will be blessed tomorrow, March 10 at Kona Community Hospital before taking the road to serve Ka`u and later South Kona. It will be open to the general public on Friday, March 30 at Pahala Community Center.
The van has been given the name Ka`a Ho`ola, which means a vehicle of revitalization and well-being. It is a longtime project of Rep. Bob Herkes, who will give the opening remarks at noon at Kona Community Hospital, along with program manager Debra Barra. Danny Akaka, Jr. will give the blessing tomorrow. The public is invited.
The 32.5-foot van is the culmination of nearly ten years of research, work and cooperation by Herkes, the state Legislature, Kona Community Hospital, and Hawai`i Medical Service Association.
Providing health care to Hawai`i Island residents, particularly school-aged children in rural areas, is a persistent challenge with the island’s size and low population density. Ka`a Ho`ola is intended to remedy that problem. The theme is Growing Rural Healthcare. “This mobile medical van will greatly improve access to medical care for people in rural areas of the Big Island,” Herkes said. “When needed, the mobile medical van will be able to reach people in remote areas, provide care, and indeed, save lives.” 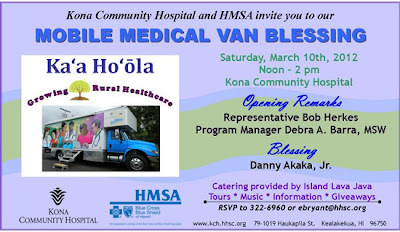 The program manager said the van and staff will first work with public schools. The mobile medical facility has a spacious exam room, indoor and outdoor reception, a lab, and refrigerated storage. Students can receive vaccinations, immunizations and school physicals, and staff members will be able to offer screenings and health education. Wireless tele-health capabilities will enable attention from specialists.
Ka`a Ho`ola was built using $350,000 in state funds approved by the 2009 Legislature. Kona Community Hospital will use its medical expertise and staff, and own and operate the van. For the first two years, HMSA will provide nearly a half million dollars in funding.
During that time, Kona Community Hospital will work with the Department of Health and the Department of Education to serve public schools. The goal is to achieve a sustainability model within two years, meaning that it will eventually pay for itself through health insurance and other programs as HMSA direct funding ends.
Jennifer Diesman, vice president of Government Relations for HMSA, said that “HMSA is committed to providing access to quality, affordable care, and we’re confident that this effort, coupled with our online care program, will help.”
CANDIDATES FOR STATE HOUSE AND SENATE can make it official. The state Reapportionment Commission voted 8-0 last night to approve the new maps laying out the voting districts. Those maps cut Ka`u in two, giving it two Senate and House Districts starting at Punalu`u. One Senate District, now held by Josh Green, will go from Honu`apo to Kona Airport. The other, being sought by Rep. Bob Herkes, will extend from Punalu`u to Kea`au and include most of Puna. The House District, with no announced candidate, will run from Punalu`u to Kea`au,  excluding Puna makai. The other House District will go from Honu`apo to Kona, and incumbent Denny Coffman said he will run to represent west Ka`u.
PUBLIC UTILITIES COMMISSIONER Michael Champley won state Senate confirmation yesterday to become a member of the Public Utilities Commission after being appointed by Gov. Neil Abercrombie. “Champley’s extensive professional experience in the energy industry, commitment to public service and proven leadership throughout his career are all important characteristics that make him an asset to the PUC,” said Sen. Roz Baker, who chairs the Senate Commerce and Consumer Protection Committee that recommended Champley’s confirmation.
Champley worked as a Maui-based senior energy consultant focused on clean energy resource integration in Hawai`i. He has over 40 years of experience analyzing, integrating and managing complex economic, public policy and technical issues confronting an evolving regulated energy utility industry.
Champley holds both electrical engineering and MBA degrees with emphasis in finance and public utility economics and regulation. He was earlier appointed temporarily to the PUC and was a decision-maker in the recent `Aina Koa Pono case, which would have established a biofuel refinery and plantation in Ka`u.

A DEADLY CAR CRASH on Kama`oa Road in 2008 that left a 12-year-old boy dead and two others injured is going to a June trial in Third Circuit Court. Judge Ronald Ibarra has set the date, according to a report in West Hawai`i Today. The 21-year-old driver, who was 17 when the crash occurred, pleaded not guilty to negligent homicide and injury charges after being indicted by a grand jury in February. During the accident, the driver lost control of the car and crashed into a utility pole, before the vehicle flipped. No one wore seatbelts, according to police reports. A negligent homicide conviction carries a fine of up to $25,000 and prison for up to five years.

WITH BOOKS BEING SHIPPED from all over the state to Ka`u libraries, patrons may want to keep them a little longer than usual before they go back off island. Readers can renew online from their own computers their books and other materials except for Hot Picks, DVDS, and videotapes.
One renewal per item is allowed and may be declined if another person is waiting in line for it. Renewals are available by going to www.librarieshawaii.org and clicking on My Account. Enter the library card number and PIN. Access your Items Out list. Select item to renew; click on box on left side; click on the “Renew” box. A new due date appears, or a prompt explains why item could not be renewed.
Write new due date on the actual book’s due date slip as a reminder. Renewals can be also done at the library in person. 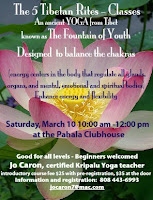 THE FIVE TIBETAN RITES are the topics at a workshop tomorrow from 10 a.m. to noon at the Old Pahala Clubhouse. Certified Kripalu Yoga teacher Jo Caron explains the background of the Rites and their effects on health, as well as postures. Tea and fruit will be served after the workshop. All levels, including beginners, are welcome. Pre-registration is $25, or $35 at the door. Call 443-6993 or email jocaron7@mac.com.

VISIT OUR SPONSORS AT PAHALAPLANTATIONCOTTAGES.COM AND KAUCOFFEEMILL.COM.
Posted by The Ka`u Calendar at 10:10 AM Links to this post