KAʻŪ’S ELECTED COUNTY REPRESENTATIVES ARE SWORN IN. They began their new terms yesterday in Hilo, with hula, speeches and Judge Ronald Ibarra administering the oaths.
County Council member Maile David said after the ceremonies, “I am very, very happy and optimistic with the makeup of this new council. The feeling is that everyone is striving for the same thing, to help their communities and make this island better.” She described the council members as “diverse. With our backgrounds we  will bring a lot of creativity and problem solving.” She applauded incoming Mayor Harry Kim who talked about the diversity of the population of Hawaiʻi Island. “He said that we should be an example for the world in demonstrating what aloha is, and how we treat others. The reason we have aloha is because our whole state is a cosmopolitan state and we have learned how to work together and live together.”
The mayor, beginning his third term after sitting out for two terms, talked about Mauna Kea, saying that he was saddened about the court case regarding the location of the Thirty Meter Telescope on the mountain. Kim said those involved should have talked about their problems “with their hearts.” While the audience sat spellbound, he said he believed the whole mountain could become a park for education. When interviewed after the ceremony, Kim stated that he would be in favor of the construction of the TMT, provided all Hawaiians can learn and benefit from it.
County Prosecutor Mitch Roth began his address by introducing a dog he brought to the stage named Faith that helps out at the county prosecutor’s office. He said he had faith in the dog and named her so. He described the many obstacles he had to overcome in order for Faith to be accepted there. Problems included working with those allergic to dogs, those afraid of dogs, and then getting around rules that prohibit dogs in courtrooms and other places that Faith needs to go to do her job.
Roth mentioned Cold Cases his department has reopened so that victims and families can have closure. He also said that he encourages his staff to treat both victims and defendants with respect, as though they are family.
Musical entertainment kept the ceremony light and interesting for hundreds of people who attended. The vibrant Hawaiʻi County Band played the prelude and an opening processional and concluded the ceremony with a recessional. Alexandra Roth led the audience in singing The Star-Spangled Banner. She also led Hawaiian anthem Hawaiʻi Ponoʻī.
Hula dancers from Waiakea High School entertained the audience with two numbers accompanied by Hawaiian chanting and drumming. After the ceremony, a spread of food was offered to attendees for lunch, as the newly inaugurated Mayor, Prosecuting Attorney and County Council members wandered through the exuberant crowd, posing for photos, accepting mountains of leis, countless hugs and endless congratulations.

AN ENVIRONMENTAL IMPACT STATEMENT for the entire Dakota Access Pipeline would be required and approval granted before further construction at Standing Rock, North Dakota, according to Congresswoman Tulsi Gabbard. She praised the Department of the Army and its Army Corps of Engineers for denying an easement for the pipeline route, at least until more studies are completed. While visiting the Standing Rock camp over the weekend, Gabbard said that only an Environmental Assessment has been conducted, “which is not anywhere near as comprehensive as the EIS.” Gabbard credited the chair of the Sioux tribe for pressing the Army for the EIS.
Gabbard said the Sioux tribe, along with thousands of veterans and other supporters who traveled to Standing Rock, “are celebrating. They are joyful that their stance for water, as water protectors, has been successful.”
The Guardian carried a story yesterday with a headline stating “Standing Rock is a modern-day Indian war. This time Indians are Winning.”  The subhead: “A historic growing movement for Indigenous rights is a key to protecting land and water and preventing climate chaos.” Reporter Martin Lukacs wrote that the Obama administration’s decision to refuse the Dakota Access Pipeline permission to complete its construction has shaken up an old story. ”Its old version was that Indigenous people have always been in the way of progress, their interests a nuisance or threat, their treaties a discardable artifact. The American heroes forged on these high plains of the west were never the Indians: they were the gold-diggers or gamblers, the cowboys or calvary.
“But over the past months, it became impossible to watch peaceful Indigenous people and supporters attacked by snarling dogs, maced, and shot with rubber bullets and water cannons in freezing conditions, and still see in them a threat. It was impossible to look upon these young Indigenous men and women, in jungle dresses or on horseback, and not observe the courage that America desperately needs. It was impossible to listen to the cry of their slogan and not hear a rallying vision for all of us: Water is Life.” The writer further describes the Standing Rock drama: “This is not high-minded romanticism. It is hard-bitten reality.” See The Guardian To read comments, add your own, and like this story, see Facebook. Follow us on Instagram and Twitter.

GOV. DAVID IGE RESPONDED TO QUESTIONS ABOUT DIVISIVENESS that emerged during and after the recent presidential campaign. Regarding what it means for Hawaiʻi, he released a statement yesterday, saying, “This is Hawai‘i’s opportunity to lead by example. We celebrate diversity better than any other state because we encourage people to be proud of who they are and where they came from and to share that with others. With our Native Hawaiian gift of aloha, this is our chance to show how a multi-cultural community can work.” To read comments, add your own, and like this story, see Facebook. Follow us on Instagram and Twitter.


REP. RICHARD CREAGAN HAS ANNOUNCED AN OCEAN VIEW COMMUNITY FORUM for Monday, Dec. 19 at Ocean View Community Center at 6 p.m. Creagan represents District 5 in the Hawaiʻi House of Representatives and chairs the Committee on Agriculture. District 5 includes Honuʻapo to Nāʻālehu, to Ocean View, to Miloliʻi to Capt. Cook, Kealakekua and parts of Kailua-Kona. A statement from his office says that in his new chairmanship, Creagan “is excited to help the Big Island and all of Hawaiʻi increase agriculture for all farmers across the State.” The forum is designed for discussion on all issues related to Ocean View and Kaʻū in preparation for the 2017 Hawaiʻi Legislature which convenes in January.   To read comments, add your own, and like this story, see Facebook. Follow us on Instagram and Twitter. 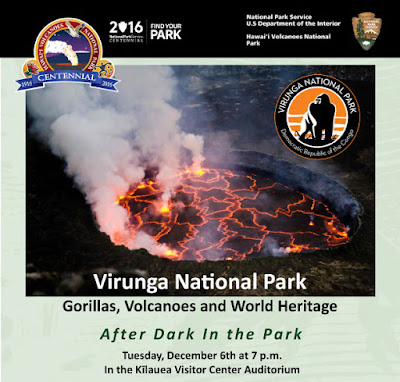 AFTER DARK IN THE PARK: Virunga National Park is the topic tonight, Tuesday, Dec. 6 at 7 p.m., Kīlauea Visitor Center Auditorium in Hawai‘i Volcanoes National Park. Travel writer and Virunga advocate Kimberly Krusel offers a virtual visit to what has been called the most biologically significant park in Africa. The park located in the Congo was created in 1925 as the first national park on the continent of Africa. It was founded primarily to protect mountain gorillas living in the forests of the Virunga Mountains. Today Virunga is a UNESCO-designated World Heritage Site. Free; park entrance fees apply.

ALYSHA & PETE 3-ON-3 BASKETBALL WINTER JAM tournament will be held at the new Kaʻū District Gym, this Friday Dec. 9-11. Age groups are ten and under, 12 and under, 14 and under, boys, girls and co-ed. Men and women are also invited to compete. The tournament raises money to help fund Trojan Senior basketball players Pete Dacalio and Alysha Gustafson to travel to the mainland with coach Jen Makuakane to look at colleges who may provide them with sports scholarships. To donate, call Summer Dacalio at 498-7336, Pete Dacalio at 498-3518 or Alysha Gustafson at 339-0858.

PĀHALA’S CHRISTMAS PARADE IS THIS SUNDAY. The parade is in its 38th year, travels through the streets of Pāhala, with Santa and his helpers handing out candy to kids. A traditional stop is Kaʻū Hospital where long term patients come outdoors to see the decorated trucks cars and floats, marching groups and costumed characters. Participants begin gathering at the old Pāhala Armory at noon and the parade starts at 1 p.m. The parade ends at the Catholic Church on Pikake Street for refreshments. Organizer for almost four decades is Eddie Andrade. For more information, call Andrade at 928-0808. 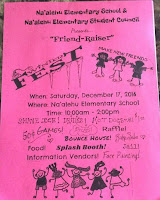 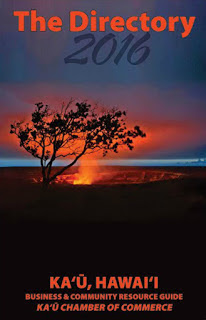 Posted by The Ka`u Calendar at 5:24 AM Links to this post