THE U.S. SENATE continues to try to come up with a plan to avert an unprecedented government default. Sen. Daniel Inouye said, “At this moment, we have a plan before us that will stave off the certain financial disaster that will occur if the United States defaults on its financial obligations. I urge my colleagues from both sides of the aisle to end the debate and come together to do what is right for our constituents. We have to find a solution to this financial crisis. I’m going to assure the soldiers they’ll get paid. I’m going to assure the seniors they’ll get paid. As long as I am a senator, they’ll get paid. So help me God they’ll get the money. We’re going to make up for this. We are going to get this done.”
Sen. Daniel K. Akaka said, “Service members and veterans, seniors on Social Security and Medicare, those on pensions or unemployment, investors and millions of other Americans across the country are depending on us. The United States’ economy and creditworthiness, and the well being of our families, should not be held hostage to shifting political demands. I am glad that negotiations are continuing, and hopeful that we can reach an acceptable compromise.” 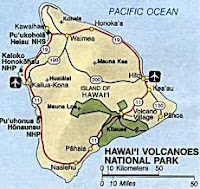 HAWAI`I VOLCANOES NATIONAL PARK will most likely shut down unless the federal debt ceiling is raised by Aug. 2. Superintendent Cindy Orlando spoke to Hawai`i Tribune Herald regarding the possible shutdown, saying “We have to remain confident that this is going to get resolved.” In the event of a government shutdown caused by a suspension of funding, one result could be the termination of non-essential services, including national parks. Hawai`i Volcanoes National Park would face a similar situation national parks faced in 1995, when a short federal shutdown forced it to close temporarily. A national default, however, would have more serious consequences.

A SCENIC BYWAY MEETING will be held at Na`alehu Community Center tomorrow at 6 p.m. Highway 11 in Ka`u has been nominated to as a State Scenic Highway, following an application by the Ka`u Chamber of Commerce to the federal government. “The Slopes of Mauna Loa” with its large stretches and untouched landscape, was the theme chosen by the committee established by the Chamber to oversee the designation of the scenic byway. Another byways meeting will be at Pahala Community Center Wednesday, Aug. 3 at 7 p.m.

THE PUBLIC UTILITIES COMMISSION’S PUBLIC HEARINGS on the proposed `Aina Koa Pono biofuel refinery between Wood Valley and Pahala and the proposed biofuel farm on thousands of acres of pasture between Pahala and Na`alehu are scheduled for Tuesday, Aug. 2 at 9 a.m. at the State Building in Hilo and at 4 p.m. at the West Hawai`i Civic Center in Kona. The hearing is regarding the PUC approving the contract between `Aina Koa Pono and the electric company and a proposed rate hike for O`ahu and Big Island residents to help pay for the biofuel which would be trucked from Ka`u to the electric plant near Kona Airport. According to county and state officials, neither Environmental Impact Statements nor Environmental Assessments are required for the project.

BIG ISLAND-BASED developer of algae-based biofuels and bioproducts Cellana LCC plans to expand its business in the state. The company announced recently that it is seeking up to $90 million in investment for a 217-acre commercial facility on Maui. The company has been operating a six-acre facility near Kona for over two years that produces up to 1.5 tons of algae a month. Algae grows much faster and produces up to 300 times more oil than crops currently grown for biofuel, the company says.

THE HAWAI`I COUNTY REDISTRICTING COMMISSION met again last week to settle the issue regarding excluding military and non-resident students and inmates from the population base recorded used for drawing district lines for electing public officials. The Commission is having difficulty with software provided by the state government, which includes non-residents in the population base. This makes it difficult for the county commission to exclude the non-residents. Commissioner Jeff Melrose called for the use of historical maps of the county to help draw new political boundaries.

SEN. GIL KAHELE will launch a series of community forums to allow local residents to voice their concerns and to prepare himself for the 2012 State Legislature. The first forum be held at Cooper Center at 19-4030 Wright Road in Volcano on Wednesday, August 31 from 5:30 p.m. to 7:30 p.m. Participants may email questions or concerns prior to the meeting senkahele@capitol.hawaii.gov.

Posted by The Ka`u Calendar at 3:41 PM Links to this post

A NA`ALEHU RESIDENT has been reported missing. Police are searching for the 29-year old woman, Sarah A. Cain, who was last seen on July 14. She is Caucasian with short brown hair and brown eyes, five-foot-6-inches tall, and weighs 120 pounds. Anyone with information is asked to call Detective Myra Iwomoto at 326-4646, extension 281, or the Police Department’s non-emergency line at 935-3311.

STUDENTS FROM ALL OVER the world travel far to experience life in the United States, and County Council member Brittany Smart is calling for more families in Ka`u to contact the Center of Cultural Interchange and apply to host foreign high school students. Hawai`i’s unique location helps it attract students from many countries. Last year, 13 students lived in Kona from countries like Japan, Cambodia, Tajikistan, Kyrgyzstan, Yemen, Mali, Norway, France, Germany, Italy, and Pakistan. Families can be singles or couples, with or without children, any religion or ethnicity, straight or gay, as long as they are able to provide a safe environment for students. Candidate families will go through a screening process. The students are 16 to 17 years old and will attend the local high school in the host family’s district. Call local coordinator Pamela Wang at 323-2117 for more information on the program or visit the center online at www.cci-exchange.org.

A SCENIC BYWAY MEETING will be held at Na`alehu Community Center this Monday at 6 p.m. Highway 11 in Ka`u has been nominated to be designated as a State Scenic Highway, following an application by the Ka`u Chamber of Commerce to the federal government. “The Slopes of Mauna Loa” with its large stretches and untouched landscape was the theme chosen by the committee established by the Chamber to oversee the designation of the scenic byway. This week’s meeting will entail the creation of subcommittees that will manage different aspects of the scenic byway and a public discussion on its priorities. Another byways meetings will be at Pahala Community Center Wednesday, Aug. 3 at 7 p.m.

A PROMISED GOVERNMENT AGENCY to promote renewable energy development has yet to materialize, says Sophie Cocke, of Civil Beat. In response criticism of the Public Utilities Commission and state energy office last year, then-candidate-for governor  Neil Abercrombie declared that he would move to establish an Independent Hawai`i Energy Authority, “a new government agency that would bolster the state’s transition to renewable energy,” reports Cocke. The Energy Authority would address the reputed failings of both the PUC – languid due to a lack of funding and expertise in the field – and the Strategic Industries Division of the state Department of Business Economic Development and Tourism, which serves as the state energy office – short of the power needed to exert effective public policy – by combining them.
While it takes 60 to 90 days for other states’ public utilities commissions to make a ruling, Abercrombie claimed on the campaign trail, it can take Hawai`i’s commission up to three years. The necessary funds and office space are cited as the main obstacles in reforming the two agencies. Cocke reports, however, that while the PUC and the state energy office remain two separate agencies, PUC Chair Hermina Morita claims that the governor has appointed able and highly regarded people to the commission.

THE PUBLIC UTILITIES COMMISSION’S PUBLIC HEARINGS on the proposed `Aina Koa Pono biofuel refinery between Wood Valley and Pahala and the proposed biofuel farm on thousands of acres of pasture between Pahala and Na`alehu are scheduled for Tuesday, Aug. 2 at 9 a.m. at the State Building in Hilo and at 4 p.m. at the West Hawai`i Civic Center in Kona.
Here are more questions and answers from `Aina Koa Pono:

Can the crops produce the volume of biomass needed to produce 16 million gallons of biofuel per year?  Yes. The biomass volumes needed can be produced from less than the total acres leased by AKP, the company states.

How will other sectors of the local economy, like tourism, be impacted?  The local economy should benefit greatly from more locally available high paying jobs, creating new businesses locally to support the additional jobs created, and "to bring in tourists who will be visiting Ka`u to see how our plant operates. Our plant will be hidden from the view of residents to the greatest extent practicable. Our plant will have no negative effect on Ka`u’s tourism economy," promises `Aina Koa Pono.

Will the project result in greater economic diversity or dependence?  Economic independence will be a side benefit as other service industries spring up in Ka`u. As Ka`u is primarily an agricultural area, by adding a new type of facility gives greater diversity, states `Aina Koa Pono.  "This also means that it will make Ka`u more resilient to unexpected changes. For example, currently a poor crop of macadamia nuts or coffee depresses Ka`u because there is little else generating the economy," claims `Aina Koa Pono.  "Once AKP’s facility is in place even an exceptionally dry or wet season will not affect the generation of biofuel and that will help keep the local economy regulated."
Posted by The Ka`u Calendar at 1:33 PM Links to this post