KA ʻOHANA O HONUʻAPO has issued a statement opposing the Hawaiian Springs water bottling plant that is planned for Pahala. The organization, which helps steward the Honuʻapo fishponds, bay and surrounding lands, posted on its facebook, the following:
“Join us in saying #NotoHawaiianSprings proposed water bottling facility in Pahala. Our Hawaiʻi State Constitution and public trust doctrine protects Hawaiʻi’s water for Hawaiʻi’s people. Water is Life. It is time to enforce the state law and oppose this theft of our water resources (for export and commercial gain!).”
Ka ʻOhana O Honuʻapo states that it is, “Standing in protest with Sierra Club of Hawaiʻi and Surfrider Foundation, Big Island Hawaiʻi Chapter - Kona Kai EA!” 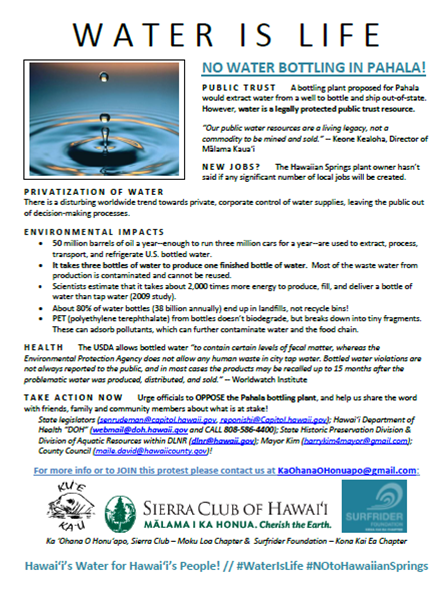 The bottling plant recently gained a plan approval from the Hawaiʻi County Planning Director, and needs various state and other county approvals. The developers propose to build a retail center for tour buses, vans and cars along Maile Street in Pahala. More than 3 acres would be covered by a bottling plant and related buildings. The water would come from an old sugar plantation shaft that reaches 1500 feet under Maile Street to a source 750 feet below the surface. The company would need to apply to the state for permission to use the water.
The water was used for mill operations and as an emergency back up source for potable water for houses in the town and firefighting during plantation days. It has not been used for over 20 years, since the sugar mill shut down in 1996.
Kaʻū’s County Council member Maile David says she plans a public meeting. To read comments, add your own, and like this story, see Facebook. Follow us on Instagram and Twitter.

NOVEMBER IS FLEDGLING SEASON FOR HAWAIIAN PETRELS HIGH ON MAUNA LOA and Hawaiian Volcano Observatory scientists entitle this weeks Volcano Watch:  Seabirds Struggle to Survive on Mauna Loa.  They write that “High on the slopes of Mauna Loa, the largest active volcano on Earth, a unique Hawaiian seabird struggles for survival. The ʻuaʻu, or Hawaiian petrel (Pterodroma sandwichensis), spends most of its life at sea, returning to Mauna Loa only to nest and rear young in high-elevation, underground burrows.
“It is estimated that historic ʻuaʻu populations were likely in the hundreds of thousands to millions of birds, with nests ranging from sea level to high mountain slopes throughout the main Hawaiian Islands. Today, the ʻuaʻu still occurs on several islands, but has become one of the most endangered seabirds in Hawaiʻi. Many threats have contributed to the decline of this endemic species, including historic hunting by humans, non-native predators, and habitat loss. More recently, inflight collisions with structures and groundings caused by disorienting artificial lights have taken a toll on the species.
“On the Island of Hawaiʻi, ʻuaʻu once nested from the lowlands to the upper slopes of the volcanoes. They are now limited to high elevation sites on Mauna Loa and, possibly, steep cliffs on Kohala. Biologists have monitored remote nesting colonies on Mauna Loa for over two decades, and now estimate the population to be only 75 breeding pairs.
“The somewhat mysterious life history of ʻuaʻu makes monitoring this species extremely challenging. ʻUaʻu are pelagic, spending much of their lives at sea, coming to land only for nesting. They forage in distant feeding areas – in some cases, as far north as the Aleutian Islands – and fly to and from nesting areas at night. On Mauna Loa, ʻuaʻu nest in remote underground burrows that are so deep they can’t be seen. Biologists are incorporating new technologies, including remote cameras and satellite transmitters, to better understand the species.
“ʻUaʻu belong to the taxonomic order Procelleriformes, as do albatrosses, shearwaters, and other petrel species. Like their relatives, ʻuaʻu are long-lived (30-plus years) and do not breed until four to six years of age. Once nesting begins, both parents take turns incubating a single egg for roughly two months. After an ʻuaʻu egg hatches, the adults head out to sea to feed on squid and fish, with foraging trips lasting from several days to several weeks at a time. The chick stays in its burrow, often alone, and waits for its parents to return with food.
“After about three months, the growing ʻuaʻu chick ventures out of the burrow to exercise its newly feathered wings. Within weeks, the ʻuaʻu face many dangers during their time on land. Because they have no natural defenses, both adults and chicks are easy prey for introduced animals like feral cats and mongooses. ʻUaʻu are also at risk when flying between nest sites and the sea. Birds have collided with unexpected structures along flyways, such as wind turbines and power lines. Artificial lights casting an upward glow can disorient ʻuaʻu, causing them to land in unsafe areas, where they are susceptible to predators and cars, and where they may not be able to launch back into flight. The impacts of additional threats to ʻuaʻu, such as climate change and marine plastics, are not yet fully understood.
“Fortunately, government agencies, private organizations, utility companies, and landowners have joined forces to reduce threats to ʻuaʻu and other Hawaiian seabirds. Hawaiʻi Volcanoes National Park, with the help of several partners, recently completed a barrier fence to exclude cats from a key nesting area on Mauna Loa (https://youtu.be/m1MfyDbteVw). Collaborative conservation efforts, like this fence, are critical for the protection of 'ua'u and other sensitive species.
“November is fledging season for ʻuaʻu on Mauna Loa. Island residents can play a role in helping these young birds reach the sea: Direct outdoor lights downward and shield the tops of lights to minimize disorientation of the birds as they fly between the mountain and the sea. Keep domestic cats inside or in outdoor enclosures, and avoid contributing to feral cat populations by preventing unwanted litters of kittens.”
To report a grounded seabird in Hawaiʻi Volcanoes National Park, call park dispatch at (808) 985-6170. Outside the park, contact the state Department of Land and Natural Resources, Division of Forestry and Wildlife at (808) 974-4221. For more, see Hawaiʻi Volcanoes National Park website: https://www.nps.gov/havo/learn/nature/uau.htm.

ULUPOLU INITIATIVE invites community members, including food producers, to listening sessions in Kamuela on Friday, Dec. 2 from 10 a.m. to noon at Kohala Center, and in Hilo at the Hawaiʻi Innovation Center, at 117 Keawe St., on Tuesday, Dec. 13 from 3 to 5 p.m.  Ulupono Initiative will host the gatherings at agricultural “hot spots” within each county “to listen, learn and brainstorm solutions to Hawaiʻi’s many challenging food issues.”
The eBay online auction site’s founder Pierre Omidyar and his wife Pam Omidyar launched the Ulupono Initiative. The Ulupono Initiative is part of The Omidyar Group.  A portfolio statement of Ulupono Initative at ulupono.com states: “Our investment model is based on our founders’ belief that both the non-profit and for-profit sectors can be a force for good.”
The organization describes itself as “a Hawaiʻi-focused impact investing firm that uses for-profit, non-profit and social investments to improve the quality of life for island residents in three areas: locally produced food, clean renewable energy and waste reduction.”
The purposes behind the meetings are described as: “In an effort to improve our current local food production metrics and better understand the constraints in the system that make expansion challenging, Ulupono Initiative is inviting key stakeholders throughout the state for insights and suggestions. We hope that these sessions will contribute to the collective knowledge of both the constraints and opportunities for investment of resources that will help us move towards greater food self-sufficiency.”
Ulupono has faced some opposition to its proposed dairy farm planned near resorts and a popular surfing and recreational beach on Kauaʻi. Its founders have faced opposition for proposed resort development on Hanalei River, also on Kauaʻi. Anyone interested in attending the meeting in Kamuela or Hilo should RSVP to Lauren Reichelt at lreiochelt1@gmail.com. To read comments, add your own, and like this story, see Facebook. Follow us on Instagram and Twitter. 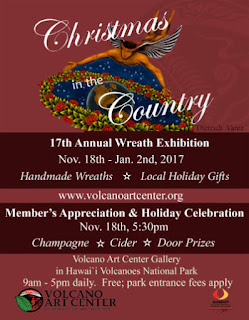 CHRISTMAS IN THE COUNTRY is open through New Year’s Day from 9 a.m. – 5 p.m., at  Volcano Art Center Gallery in Hawai‘i Volcanoes National Park.  Featured is the 17th Annual Invitational Wreath Exhibit, with prizes awarded for the best wreaths. To participate, contact Emily Weiss at 967-8222 or gallery@volcanoartcenter.org. Free; park entrance fees apply.
HIʻIAKA & PELE, Saturday, Nov. 19, from 9:30 to 11 a.m., Kahuku Unit of Hawai‘i Volcanoes National Park. The famous myth of the volcano goddess Pele and her companion Hiʻiaka is the focus of this free, moderate, one-mile walk. Participants discover the Hawaiian goddesses and the natural phenomena that reveal their story on this free, moderate, one-mile walk. nps.gov/havo 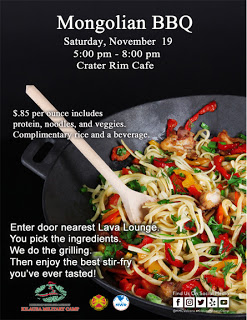