THE TWENTY-SEVENTH STATE LEGISLATURE opened today in Honolulu with Senate President Donna Mercado Kim mentioning Ka`u in the first few seconds of her speech. She noted that this year begins with several newcomers to the Senate…. “From Ka`u and Puna comes Russell Ruderman,” she said.
Kim noted that she grew up in a rural area, “one of five kids in a poor working-class family. Like many of you, both my parents worked and struggled to keep food on the table and a roof over our heads. Given those modest beginnings, never could I have imagined that I would someday be standing before you as Senate President.”
She said: “The Hawai`i of our childhood was a lot different than it is today. We had a smaller population, an economy still largely dependent on agriculture, no freeways, no traffic congestion, fewer of the social ills that we now see, and a smaller, and no doubt simpler, government. We were blessed with a strong spirit of community. We took care of each other. As kids, we played with tops, bean bags, and marbles, in the streets with friends from the neighborhood. We walked to school together, and we were unburdened by the concerns that we worry about these days.”
She described an old Hawai`i much like Ka`u remains today: “Then there was that special teacher, aunt, or uncle who mentored and influenced our lives. For me, it was Kumu Hula Aunty Maiki Aiu, who instilled in me the traditional Hawaiian core values of aloha, lokahi (harmony), kuleana (responsibility) and ha`a ha`a (humility).
Through hula she taught me discipline, respect, hard work, and grace. These values are the foundation of our kupuna that has been handed down from generation to generation.”
She thanked another Big Island senator Malama Solomon and the Beamer-Solomon halau “for perpetuating this legacy.”
Beyond personal hopes and wishes, Kim spoke to the Legislature’s having helped improve Hawai`i in public education, in the growth of charter schools, University of Hawai`i, health insurance coverage for individuals and families and in laws that give protections to workers.
She noted all of the work going into recovery of the visitor industry and said, “Our host culture can teach, touch, bridge, and inspire those who embrace Hawai`i and our people.” In particular, she said, “Hawaiian music and dance transcend differences in race, nationality, or language.” She said she is working with others on the establishment of a museum/center of Hawaiian music and dance atop the Hawai`i Convention Center.
Kim, who replaced Shan Tsutsui as Senate president when Gov. Abercrombie appointed him as lieutenant governor, is Hawai`i’s first Filipino-American Senate president.
See more in tomorrow’s Ka`u News Briefs.

NEIGHBOR ISLAND CHILDREN AND YOUTH make up 63 percent of the wards confined at Hawai`i Youth Correctional Facility, Mayor Billy Kenoi told the state Senate Ways and Means Committee yesterday. “We must do more to intervene earlier to provide better, more positive alternatives for these young people. We urgently need to divert these youths out of the criminal justice system and into services that will allow them to succeed and thrive.”
He noted that “this year, the Office of Youth Services in partnership with the Hawai`i County Office of the Prosecuting Attorney will launch the first juvenile intake and assessment center in East Hawai`i with $ 200,000 in grant funding from the federal Office of Juvenile Justice and Delinquency Prevention. This new program to assess at-risk youth who have been arrested for minor or status offenses will identify the needs of these young people and will link them and their families with appropriate services. These youths are not a threat to public safety,” said Kenoi. Diverting them out of the criminal justice system will help to free up our police officers for more important patrol duties, making better use of our public safety resources.”

Kenoi said the state administration’s proposed budget includes $ 800,000 for each of the next two years to expand this juvenile intake and assessment effort to every island in Hawai`i, “and we strongly agree with this initiative. This appropriation would provide enough funding to open a new center in West Hawai`i, and will benefit our young people, our police and the entire community. It will save our state taxpayers money in the long run.”

PRIMARY CARE TRAINING AND RURAL RESIDENCY programs to increase the number of physicians on Hawai`i Island and around the state was another push by the mayor at the Legislature yesterday. He talked about a “severe physician shortage, with a recent study estimating that the County of Hawai`i needs 150 more doctors to provide an adequate level of access to health care for our residents.” Kenoi told legislators that projections by John A. Burns School of Medicine show the physician shortage will dramatically worsen in the next five years as many doctors retire. “An important piece of the solution for our community is the rural residency program, which is now undergoing national accreditation and will begin training residents in 2014. National research shows that 80 percent of residents practice near where they train, and we know this program will help ease the physician shortage in our county and in rural areas across the state.”

U.S. REP. TULSI GABBARD asks Ka`u residents to join thousands of volunteers around the country who will honor the legacy of Dr. Martin Luther King, Jr. by participating in a National Day of Service this Saturday. Events on the Big Island are being held in Hilo and Kona.
In Hilo, participants can help clear 15 acres of land (cutting underbrush and trees) to be used for the Rediscovering Ahupua`a Life System organization’s educational activities, which include teaching keiki about aqua and animal science. Call Blaise Delima at 987-5698 for all the details.
In Kona, a cleanup of Kahalu`u Bay Beach is scheduled. Volunteers help remove plastic trash and cigarette butts that pose hazards to marine life at this park that is used by hundreds of thousands of visitors and residents each year. For more information, call Bob Kim at 756-3828.

THE 30TH ANNIVERSARY of Kilauea Volcano’s East Rift Eruption is the topic at Pahala Plantation House a week from today, Wednesday, Jan. 23. Tim Orr, USGS Hawaiian Volcano Observatory geologist, reviews highlights from the past 30 years and talk about recent developments on Kilauea’s East Rift Zone. He also shows photos and videos of the ongoing eruption. During its first three years, spectacular lava fountains spewed episodically from Pu`u `O`o vent. Since then, nearly continuous lava effusion has built a vast plain of pahoehoe lava that stretches from the volcano’s rift zone to the sea. Although the eruption has been relatively quiet during the past year, with mostly steady, but unusually weak, activity, it has produced some dramatic lava flows in past years.
The program, which is part of Volcano Awareness Month, begins at 6:30 p.m.

CONFLICT RESOLUTION: Reframing Problems to Generate Solutions is the title of the first community workshop for 2013 sponsored by the nonprofit Ku`ikahi Mediation Center. Kimberly Dark will facilitate the session on Saturday, Jan. 26 from 9 a.m. to 1 p.m. at Hawai`i Community College in Building 388, Room 103. “This half-day workshop focuses on understanding and practicing the skill of reframing contentious, position-based statements into neutral language that helps everyone think more clearly and develop possible solutions,” says a statement from the organization. Ka`u residents are invited to sign up. These skills can be used at home as well as in the workplace, schools, associations, meetings and more.
Tuition for the community workshop is $50. To register, contact Ku`ikahi Mediation Center executive director Julie Mitchell at 935-7844 x 116 or julie@hawaiimediation.org. 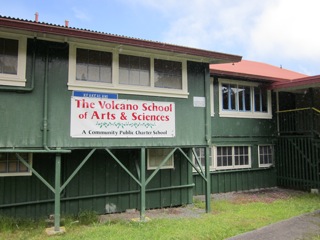 VOLCANO SCHOOL OF ARTS AND SCIENCES hosts a public meeting Thursday, Feb. 7 at 6:30 p.m. at Cooper Center in Volcano Village. The school’s board of directors and educational director will be introduced. Architectural renderings of the consolidated campus at Keakealani on Haunani Road will be on display for comment by citizens of the community. Plans for a community fundraising effort will be ready for discussion, and the contributing architects will be available to expand on their ideas. Light refreshments will be served.

KEA`AU CAME TO KA`U last night for boys high school basketball. In the JV game, Kea`au Cougars beat Ka`u 51 to 34. In the varsity game, Kea`au took home the win with 53 points to Ka`u’s 43. High-point scorer for Ka`u’s JV team was Franklin Orcino with 13. High-point scorer for Ka`u’s varsity team was Janson Candaroma with 10, reports athletic director Kalei Namohala. The teams’ next games are tomorrow at Kamehameha.

ALSO SEE KAUCALENDAR.COM AND FACEBOOK.COM/KAUCALENDAR.
Posted by The Ka`u Calendar at 12:04 PM Links to this post