FIREFIGHTERS SAVED THE HOMES of Ann Fontes, and Lisa and Jimmy Dacalio and their Ka`u Coffee roadside outlet along Hwy 11 yesterday, as three fires continued to burn around Pahala. The eastern makai fire burned into the Ka`u Desert through gulches and reached the highway, shutting it down between mile markers 46 and 51 around 1 p.m., which disrupted traffic around the island. Through this morning, police escorted one lane of traffic at a time to allow cars to travel between Volcano and Pahala.
Ash from the fires reached as far as Ocean View yesterday and air quality remained diminished this morning with heavy particulates, while SO2 from vog remained negligible. Residents and firefighters hoped for rains to clean the air and dampen flames but precipitation failed to relieve Pahala yesterday, while it poured in Ocean View and Na`alehu. A rain reached the village at 8:18 a.m. today. Ka`u Coffee Growers Cooperative President Gloria Camba said this morning that rain may help the coffee trees recover by giving them much needed moisture and washing the soot off leaves and branches.
She reported the damage, describing Godofredo Miranda's 5.7 acre farm: One third is good and the rest was in the path of the fire. "Cherries in the burned area are cooked," Camba said.
Sixto Asuncion reported 500 trees burned, and Rosita Avenue suffered charred windbreaks and several rows of damaged coffee trees. Melchor Fernandez suffered more than 200 trees damaged. A few trees burned on the farms of Jeffrey Gascon and Efren Abellera. Camba said that about 30 of the trees on the farm that she operates with Bong Aquino suffered heat damage. Camba said the farmers have taken photographs and are working on crop insurance claims.
ML Macadamia trees could be seen from Hwy 11 this morning, heavily damaged by flames, which burned their trunks as the fire swept through orchards. The county Fire Department estimated that more than 4,000 acres burned through macadamia, grasslands and into the Ka`u desert, running through Pa`au`au, Keaiwa and other gulches covered in grasses and brush. Randy Cabral, Senior Vice President and Orchard Manager for ML Macadamia, said that all of the 800 acres in orchards on makai side of Hwy 11 suffered some damage. Some trees burned to the ground mostly in the lower orchards that have been out of production since the 2000 flood - orchards that ML had been working on to bring back to life.
The ML irrigation system inside the orchards sustained severe damage as irrigation lines and pipes melted in the inferno. The wells and diesel tanks protected by firebreaks are fine, said Cabral. "Every place with grass burned," he said. Fire blazed through gulches that connected with grass that torched the firebreaks. Cabral said his crew is making sure today that any hot spots near grassy areas are put out. He said the ML crew did most of the work fighting the fires within the orchards. "They did a bang up job in containing the fire," he proclaimed.
Cabral said ML is surveying orchards and adding up the damages. When macadamia trees die, the losses go on for years and years as it takes many years for macnut trees to mature and become productive, should they have to be replanted.
Eucalyptus farm worker Kirk Derasin from Forest Solutions said that about 230 acres of Kamehameha Schools land burned but that most of the trees should recover.
At Ka`u Hospital, the Emergency Room reopened last night after being closed since Monday when flames jumped the highway, skipped up Kamani Street and scorched the grass makai of the main building along Hwy 11. This morning, evacuated patients remained with their hospital beds inside Na`alehu Community Center, while health officials hoped for air quality to improve in Pahala so they could move patients back to Ka`u Hospital. Ka`u Hospital Administrator Merilyn Harris said she plans to reopen the Ka`u Rural Health Clinic and the hospital laboratories tomorrow. The crew is cleaning up soot and trying to improve the air quality before patients return.
She said the air "is really smelling like a barbecue in here." A project to make windows airtight and to install air conditioning and air cleaning is expected to begin at the end of summer. Had the improvements been made before the fire, "we probably would not have evacuated," she said.
The county Fire Department estimated that more than 400 acres burned in eucalyptus, pasture and coffee farms in and around Pear Tree above Pahala. The Fire Department reported that the mauka fire was 80 percent contained this morning. Makai fires were 40 percent contained.
Yesterday, police limited travel up Wood Valley Road, as smoke filled the land mauka of Pahala through Keaiwa and into the valley. Ka`u Coffee Mill on Wood Valley Road sent some employees home and others to water down its makai lands along Hwy 11.
The U.S. government’s air quality website Airnow showed particulates in the orange level yesterday and this morning and advised that people with heart or lung disease, older adults, and children should reduce prolonged or heavy exertion. Ironically, the SO2 level, which is the usual air quality concern in Pahala, was very low.
Firefighters traveled from county and volunteer units around the state as well as Hawai`i Volcanoes National Park. Heavy equipment operators and farmers helped in building firebreaks and watering down dry lands as the fires approached buildings, farms and ranched.

JUNE 18 MARKED THE BEGINNING OF HAWAI`I POLLINATION WEEK, as proclaimed by Gov. Neil Abercrombie yesterday. The proclamation is part of an effort to raise awareness of a threat within the state’s agricultural economy. The governor also signed into law a measure that could aid Hawai`i’s fight against pests and diseases that impact the state’s bee populations.
The bill, HB 2100, releases $30,000 to the University of Hawai`i system for beehive research in collaboration with  Hawai`i Department of Agriculture. The bill focuses attentions on four islands: Hawai`i, Maui, O`ahu and Kaua`i. Throughout the state, there has reportedly been significant hive loss attributed to the varroa mite, small hive beetle and other diseases. As bees are necessary to pollinate many crops, loss of beehives threatens the agricultural economy on all islands.
UH Hilo will participate in the research, using its 110-acre Panaewa farm to develop more efficient methods for controlling the small hive beetle, which is a major pest of honey beehives on Hawai`i Island.
“Bees are particularly important as pollinators for our macadamia nut and coffee industries; bee-pollinated crops contribute about $106 million to our local economy,” Abercrombie said. “The University of Hawai`i is leading research to protect many of Hawai`i’s own native pollinators, including seven species of yellow-faced bees that are candidates for the endangered species list.”
Abercrombie added that, “by marking Hawai`i Pollinator Week in conjunction with National Pollinator Week, our state is helping to create a positive ‘buzz’ around bees and promote bee health as a vital component to healthy food systems and natural ecosystems.”
UH Hilo has been offering an introductory course on beekeeping for more than 20 years, and now also offers an advanced beekeeping course that allows students to build upon their acquired skills with independent projects that include research and creative activities. 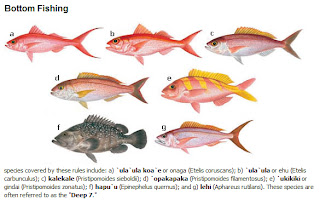 CATCH LIMITS FOR BIGEYE TUNA AND HAWAI`I BOTTOMFISH and authorized take of leatherback and loggerhead sea turtles will be discussed through tomorrow in Honolulu at the Western Pacific Fishery Management Council office. The Scientific and Statistical Committee that advises the Council will also discuss the management of other federally managed fisheries in Hawai`i.
The 2012-13 Main Hawaiian Islands Bottomfish Annual Catch Limit, for the Hawaiian Islands Deep 7 bottomfish, is expected to stay the same as the 2011-12 fishing year, at 346,000 lbs as no new information or stock assessment for this fishery has been provided.
The US Pacific Territory Bigeye Tuna and Other Highly Migratory Species Catch Limits will also be discussed along with Congressional legislation regarding the management of Highly Migratory Species.
The National Marine Fisheries Service will provide an update on a rule that, if approved, could increase the number of leatherback sea turtles from 16 to 26 and loggerhead sea turtles from 17 to 34 taken by mistake each season in the Hawai`i shallow-set longline fishery for swordfish. This would implement the Incidental Take Statement in the 2012 Biological Opinion for Hawai`i Shallow-set Longline Fishery. The Council will consider whether the proposed rule is consistent with Amendment 18 to the Pelagic Fishery Ecosystem Plan.
The Council’s Standing Committees will review the recommendations on June 25 at the Council office. Full Council will take action June 26-28 in Honolulu and transmit their recommendations to the US Secretary of Commerce for final approval. For full agendas and more details, visit wpcouncil.org/meetings.

NATURE PHOTOGRAPHY STROLLS, led by wildlife biologist/photographer Jack Jeffrey, takes place Friday at 8 a.m. and 10 a.m. from Volcano Art Center Gallery within Hawai`i Volcanoes National Park. The hour-long easy strolls take visitors along the rim of Kilauea caldera as Jeffrey communicates the ecology and geology of the region and offers tips on how to capture it on camera. Sign-ups are on a first-come, first-served basis. The strolls are free and donations are appreciated. Park entrance fees apply. Call 967-8222 or visit volcanoartcenter.org for more.

SEE OUR SPONSORS AT PAHALAPLANTATIONCOTTAGES.COM AND KAUCOFFEEMILL.COM.

Posted by The Ka`u Calendar at 2:08 PM Links to this post