KA`U COFFEE MADE A BIG SPLASH on Hawai`i News Now this morning with business reporter Howard Dicus saying, “Ka`u Coffee really tastes good. I think they are going to rival Kona.” He was reporting on the Hawai`i Coffee Association’s annual convention held over the weekend on Kaua`i, where Ka`u coffee did well in the cupping competition.
Here are results for Ka`u farms, as reported by David Gridley, of Oma Coffee Roasters, who organized the competition:
In the statewide Commercial Division, Leo Norberte’s JN Coffee ranked third and fifth, the Orcino family tied for seventh, R&G ranked ninth and Miranda Farms ranked tenth. In the Creative Division, Rusty’s Hawaiian ranked fourth, JN ninth and Joe Castaneda tenth.
For the Ka`u Coffee District competition, Rusty’s was first, JN second and third, Joe Castaneda fourth, JN fifth, Orcino sixth, R&G and FL (Fanny Lilly’s Wood Valley Coffee Farm) tied for seventh and eighth, Miranda was ninth and Ka`u Coffee Mill tenth.
Berta Miranda was taken by surprise this morning to learn that Miranda’s Farms posted in the top ten in both the Commercial Division statewide and the Ka`u District competition. Miranda’s three sisters' farms suffered severe damage from the fires that surrounded Pahala last summer, but the farm operated by Berta and her husband Jose at Moa`ula escaped. While she was unable to attend the coffee convention, Miranda responded: “I feel great, because I have the heart to be a farmer. It is amazing to be a coffee farmer in Ka`u. I am so happy for everyone in Ka`u because we can give the best cup of coffee for everyone to enjoy.” Miranda said she hopes to expand her coffee farms by buying land or securing long-term leases for growing coffee.

In the Ka`u District competition, the top coffee comes from a veteran competitor and winner, Lorie Obra’s Rusty’s Hawaiian. Obra is former president of Ka`u Coffee Growers Cooperative and has won numerous national and international awards.
Leo Norberte’s JN Coffee. which took third and fifth in the statewide Commercial Division and second, third and fifth in the Ka`u District competition, is a popular brand sold around the island and beyond. Norberte is also former president of Ka`u Coffee Growers Cooperative. He grows his coffee on land at Moa`ula and has opened a second farm on Olson Trust land.
Also connected to Ka`u coffee was the second place win by OK Farms in the statewide Commercial Division. Troy Keolanui said this morning that he is very pleased with OK Farms coffee taking second. OK Farms, which stands for Olson-Keolanui, is located in Hilo and is a sister company to Ka`u Coffee Mill, which took OK’s winning coffee from cherry to the green beans entered in the contest. Keolanui is manager and partner in OK Farms and a partner in Ka`u Coffee Mill. “We are one in the same, he said. We operate with a lot of the same practices and are under the same management team, including Ed Olson and John Cross. The Ka`u Coffee Mill equipment and expertise helped make OK a winning coffee.” In addition to growing coffee, Keolanui grows a variety of fruit trees and other crops and often leads visitors and local residents on tours of the farms.
The Hawai`i Coffee Association held its annual elections over the weekend. Greg Stille remains president. Jim Wayman is the new vice president. Gloria Biven is secretary, and Jonathan Sechrist is treasurer. John Cross and Chris Manfredi from Ka`u remain board members.

HAWAI`I’S U.S. SEN. BRIAN SCHATZ HAS RECEIVED the endorsement of former Vice President Al Gore in the 2014 Hawai`i senatorial race. “Thanks to Brian’s visionary leadership, Hawai`i implemented its own groundbreaking Clean Energy Initiative. As a result, Hawai`i has tripled its renewable energy production from six percent to 18 percent,’ Gore said in a statement. “And we’re going to need Brian’s strong, outspoken leadership in Congress for many more years to get the job done.”
Schatz responded, “I am tremendously thankful for the support of Vice President Gore. He has long been a leader on creating a renewable energy economy. I look forward to working with him to expand our clean energy production and bring good new jobs to Hawai`i.”
U.S. Representative Colleen Hanabusa is challenging Schatz in the race for Senate.


THE STATE DEPARTMENT OF EDUCATION has launched HawaiiPublicSchools.org, a redesigned website to better serve parents, students, teachers, staff and the broader public.
The website overhaul was one of the specific targets of focus outlined in the DOE and Board of Education’s 2011-2018 Strategic Plan. The new site took nearly a year of research and public and staff input. 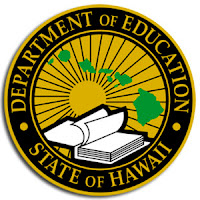 “We made a dedicated effort to ensure parents and students could easily access information and increase transparency of our reporting systems,” said superintendent Kathryn Matayoshi. “In today’s technological world, we strive to better communicate the excellence and transformation occurring in our public school system. Our new website also allows for a stronger connection with our communities.”
HawaiiPublicSchools.org is a key component of the Department’s communications and community engagement plan to inform the community about Hawai`i’s public schools.
The website covers everything from educational initiatives and reform to school-level data and college- and career-readiness efforts, as well as programs supporting student life and health and opportunities for the community to contribute to public education.
Equipped with multimedia elements such as videos and photo galleries, the website includes a Success Stories section showcasing achievements of schools, students, staff, partners and volunteers. A redesigned Employment section is available for those interested in working for the 25,000-strong Department.
The DOE invested $1.7 million of federal Race to the Top funds to build its new website. The funds will also be used to develop an employee intranet — set to launch in the fall — to boost operational efficiency, information sharing and collaboration among the various DOE offices.
The latest versions of Internet Explorer, Chrome, Firefox and Safari are recommended when accessing the website. Older and out-of-date browsers may face difficulties in displaying multimedia.
The DOE welcomes comments from site visitors through a Contact Us form or by emailing the Communications and Community Affairs Office at doe_info@hawaiidoe.org.

A WALK INTO THE PAST, the living history program that brings Hawaiian Volcano Observatory founder Thomas Jaggar to life, takes place tomorrow at 10 a.m., 12 p.m. and 2 p.m. Participants meet at Kilauea Visitor Center in Hawai`i Volcanoes National Park, then walk across the road to the Whitney Vault, an underground room containing original equipment used by Jaggar in his research on Hawai`i’s volcanoes. 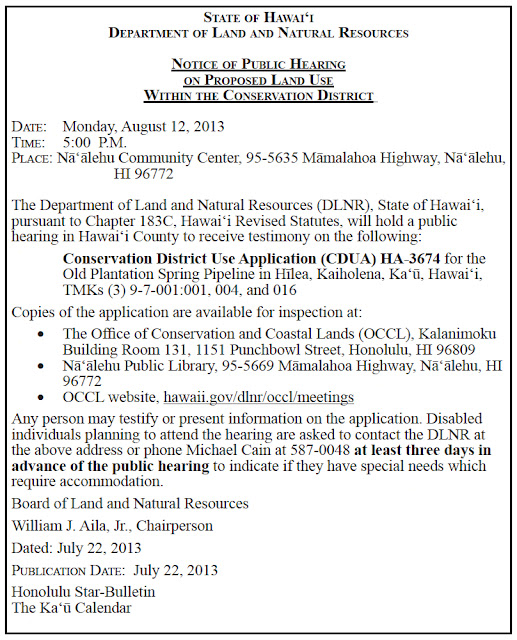 Posted by The Ka`u Calendar at 10:51 AM Links to this post