ULU MAKUAKANE, who reigned as Miss Ka‘ū Coffee, is on her way to the Solomon Islands in December to compete in the Miss South Pacific Pageant. Makuakane, daughter of Nona and Paul Makuakane of Nā‘ālehu, is current holder of the title Miss Hawaiian Islands. She is a student at University of Hawai‘i at Manoa.
“I am honored to represent Hawai‘i and of course the district of Ka‘ū and be a contestant in the Miss South Pacific Pageant. Unlike other pageants whose categories include swimsuits and evening gowns, the Miss South Pacific Pageant will have categories such as a sarong wrap and traditional attire. Although the pageant is held on one day of the week, the judging begins once the contestants arrive to the Solomon Islands. We will take part in community events, visits to local schools and hospitals and even a parade held just for the Pageant,” Makuakane said.

Makuakane is raising funds to travel to the Solomon Islands for herself and her chaperone. Pageant activities take place the week of Dec. 1 – 7. She said she will hold a fundraiser in Ka’u and will have a booth at Plantation Days on Saturday, Oct. 12 at Pahala Plantation Managers House. She can be reached at 808-640-9694.
The Miss South Pacific pageant is held on different islands each year, with last year’s event in American Samoa won by Janine Tuivaiti, of Samoa. The 2011 Miss South Pacific was held in Samoa , with the winner Alisi Rabukawaqa, of Fiji and the 2010 event was held in Papua New Guinea, with the winner Joyana Meyer, from Cook Islands. Other winners have come from American Samoa, Tahiti, New Zealand, Tonga and Niue. The last winner from Hawai‘i was in 1988.
Another connection between Ka`u and the Miss South Pacific pageant is the award-winning film Miss South Pacific: Beauty & the Sea, directed by Mary Lambert and produced by Teresa Tico who owns a home in Pahala. See www.misssouthpacificthemovie.com
To comment on or “like” this story, go to facebook.com/kaucalendar.


PLASTICS GATHERED BY VOLUNTEERS on Ka`u beaches will soon go an upcylcing company making plastic bottles, under a partnership Hawai`i Wildlife Fund, Recycle Hawai`i, a bottle manufacturer named Method and the state Department of Land & Natural Resources.
Funding comes through Recycle Hawai'I, under a $20,000 grant from the state Department of Health to help address Japan Tsunami Marine Debris and keep Hawai`i’s shorelines clean. Recycle Hawai`i is a 501(c) 3 educational organization and one of six Hawai`i non-profits to receive a grant.
“The six grants totaling $100,000 complement ongoing efforts by community groups that are already working to address marine debris, including debris originating from the Japan tsunami,” said Gary Gill, deputy director of the state Environmental Health Administration. “For years Hawai`i has depended on volunteers to keep marine debris off our beaches. We are providing a little support for the very big job they do.”
Recycle Hawaii’s approach supports ongoing collection efforts to ensure that the materials collected along local beaches are recycled to the fullest extent. “Just getting the stuff off the beaches is a herculean task and Hawai'i Wildlife Fund deserves a great deal of credit for the work they do. We wanted to match their efforts in our own area of expertise,” stated Kristine Kubat, grants specialist for Recyle Hawai`i.
"Hawai'i Wildlife Fund is excited to partner with Recycle Hawai'i on this upcoming DOH marine debris removal grant,” said Megan Lamson, project coordinator for HWF. “We look forward to this opportunity to turn some of the material collected during cleanup events into a resource."
Under the Hawai`i Island program, HWF volunteers will gather marine debris along a 10-mile stretch of coastline from Ka Lae to Waiohinu, which includes Kamilo Point in Kau, one of the world’s largest accumulation points for ocean trash. High density plastic suitable for remanufacture into bottles will be separated and shipped to Method, a manufacturer of naturally-derived, biodegradable household. The company already collects marine debris from beaches on O`ahu to make containers under the brand name Ocean Plastic.
An educational and cultural component of the program features local talent, Hawane Rios, who will travel to the schools to teach students about the relationship between life on the land and life in the sea. "We all have an innate divine connection to the land, ocean, wildlife and each other. It is our responsibility to make decisions that will be in the highest good for our Earth. This next generation of children will be the one to make the great changes so we must teach and lead them well," said Rios. Once the students develop an understanding of how marine debris impacts ocean creatures, they will track the cycle that turns the plastic washing up on their shores into new bottles.
Recycle Hawai'i Executive Director Paul J. Buklarewicz expressed gratitude for the additional program support coming from the Matson Navigation Company. “We’ve worked in the past with Matson’s Ka Ipu Aina program to remove litter from Hawaii Island roadways; we’re very grateful to get their help in removing these materials from the beaches,” he said.
Adam Lowry, co-founder and chief greenskeeper at Method, expressed excitement over expanding the company’s collection efforts in Hawai`i. “This program serves the dual purpose of cleaning up more beaches in Paradise and giving us a greater supply of material to make into recyclable packaging. Making the world a cleaner place for everyone is one of Method’s core values.”
Over the next year, the grant funds will support four clean-ups; the next one is scheduled for Saturday, Sept. 14 and Saturday, Nov. 23. For more information contact Megan Lamson at kahakai.cleanups@gmail.com.
The funding, which will be administered by the state Department of Health, was provided by a $50,000 grant from the National Oceanic and Atmospheric Administration’s Marine Debris Program and another $50,000 of matching funds contributed by DLNR.
To date, there have been eight confirmed Japan tsunami debris items in Hawai`i and over 1,700 reports in the U.S. and Canada. The public is urged to report findings of potential JTMD to DLNR at (808) 587-0400 or dlnr.marine.debris@hawaii.gov and to NOAA at disasterdebris@noaa.gov
For guidance on “what to do if you see debris in Hawai`i’s ocean or beaches” go to http://dlnr.hawaii.gov/wp-content/uploads/ 2013/01/JTMD-Guideline3.pdf.
For the latest information on tsunami debris, visit http://dlnr.hawaii.gov /marine-debris/ or the NOAA Marine Debris Program website at http://marinedebris.noaa.gov/tsunamidebris/.  To comment on or “like” this story, go to facebook.com/kaucalendar.

LIVING WITHOUT STRESS OR FEAR is a weekly class that begins Wednesday, Oct. 2 at Nā‘ālehu Hongwanji Mission. The six week meditation course is an audio learning presentation by Thich Nhat Hanh, a Zen Master, scholar, poet and peace activist who was nominated for the 1967 Nobel Peace Prize by Martin Luther King, Jr. Sessions start each Wednesday at 4:15 p.m. for approximately one hour. Classes begin after 3 p.m. yoga. Comfortable and casual dress is recommended.
For more information call Marla McCasland at 929-9737. Dropping in and out of sessions is allowed. Donations are accepted at the door but not necessary. Everyone is welcomed.
To comment on or “like” this story, go to facebook.com/kaucalendar.

NATIONAL PUBLIC LANDS DAY is tomorrow with Hawai`i Volcanoes National Park waiving entrance fees. The public is invited to volunteer by removing invasive Himalayan ginger in the park or fountain grass in Ocean View.
Stewardship at the Summit takes place from 9 a.m. to 12 p.m., when volunteers remove Himalayan ginger along park trails. Volunteers should wear closed-toe shoes and long pants and bring a hat, raingear, snacks and water. Loppers and gloves are provided. No advance registration is required. Meet at Kilauea Visitor Center.
Fountain grass removal takes place from 9 a.m. to 3 p.m. in Ocean View. For more information and to register, contact David Benitez at 808-985-6085 or david_benitez@nps.gov.

UPCOMING KA`U HIGH SPORTS: On Saturday, Ka`u Girls Volleyball will host Kohala at 10 a.m. at home. Ka`u bowling attends the BIIF Individual Bowl at Hilo lanes at 8 a.m., Cross Country races at HPA at 12 p.m., Air Riflery shoots at Kamehameha at 10 a.m. and Ka`u eight-man football plays Kamehameha junior varsity in Kea`au at 4 p.m.
To comment on or “like” this story, go to facebook.com/kaucalendar.


SUPPORT OUR SPONSORS AT PAHALAPLANTATIONCOTTAGES.COM AND        KAUCOFFEEMILL.COM. KA`U COFFEE MILL IS OPEN SEVEN DAYS A WEEK. 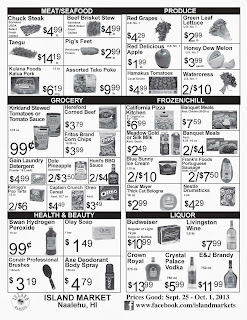 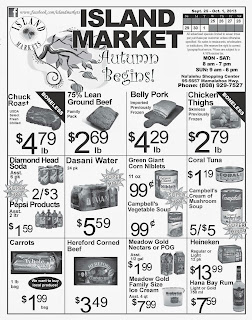 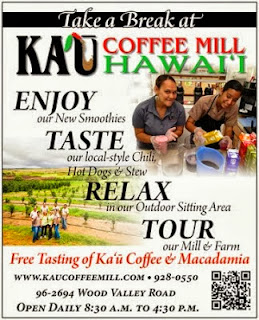