A TWENTY-FIVE PERCENT RATE INCREASE by Hawai`i Electric Light Co. over the last year and pending additional rate increases have moved the County of Hawai`i to ask the Public Utilities Commission to participate in discussions on the `Aina Koa Pono proposal. The proposal by HELCO  calls for more rate increases to pay for biofuel that `Aina Koa Pono plans to produce in Ka`u.

The county’s request to participate, written by Deputy County Attorneys Laureen L. Martin and William V. Brilhante, states that the `Aina Koa Pono biofuel contract adds to the rate burden. “Therefore the County is concerned about evaluating long-term contracts that may lock in a higher rate for many years to come.”
Martin and Brilhante write that the “interests of the Island of Hawai`i’s electric utility ratepayers, including the County of Hawai`i itself, may be significantly impacted by the outcome of this proceeding.”
Last year, the county wrote to the PUC, before the PUC turned down an `Aina Koa Pono request, saying that county government’s electric bill was about $30 million a year. This year, the county writes that the electric bill is $40 million. County government operations alone, account for six to seven percent of HELCO’s annual kilowatt-hour sales and the county is HELCO’s single largest customer, the county attorneys write.

Martin and Brilhante also write that “the proposed biofuels production facility will be located on our island and the economic development and community impacts of this project need to be fully evaluated and understood by the County, including the impact that the proposed facility and contract will have on the future development of other forms of cost-effective renewable energy resources (some without any greenhouse gas emissions).
“Obtaining electricity in an economically sustainable manner has become a priority to the people of the County,” the county attorneys write. “The County’s electric rates are among the highest in the nation and they have increased dramatically (poised to continue climbing). Each project/contract will persist many years into the future and an understanding of short/long-term costs, which affect community lifestyles and the economic trajectory of this island are more critical than ever. It is worth noting, the county has the largest number of low-income residents in the State and high electricity rates diminish disposable income available for basic necessities,” the county attorneys stated in the PUC motion.

HAWAI`I ELECTRIC LIGHT CO. and `Aina Koa Pono are asking the Public Utilities Commission to keep sections of their proposal for a 20-year biofuel purchase contract “confidential and proprietary.” In seeking a “protective order,” the motion filed this week before the Public Utilities Commission asks for pricing to be confidential and also “certain ‘critical infrastructure information’ that should not be disclosed publicly under the Homeland Security Act of 2002; and/or certain information relating to the security of the Applicants' facilities, that if disclosed publicly, could increase risk to Applicants' facilities, and jeopardize their emergency and disaster preparedness plans…”
The motion says that the applicants “are willing to disclose certain confidential information to the Commission and the Consumer Advocate, so long as the information is protected from further disclosure.” The motion calls for anyone allowed to intervene in the PUC proceedings to comply with the protective order. The environmental and consumer group Life of the Land has asked to intervene.
`Aina Koa Pono is planning to build a refinery at the mouth of Wood Valley to process trees, shrubs and other agricultural products into pellets that would be put into microwave depolymerization units to make biofuel. The project would employ 400 construction workers for two years, the company states, and provide more than 200 permanent management, professional, operations, maintenance, agricultural and administrative jobs. The proposal says that `Aina Koa Pono has leased approximately 12,000 acres for 35 years to clear trees and brush to feed the refinery and to grow biofuel crops. The land is between Pahala and Na`alehu, along the Kaalaiki old cane haul road.

According to `Aina Koa Pono, the contract between HELCO and `Aina Koa Pono is a cornerstone for financing the project. The proposal projects that electric bills would be raised an average of $1 for every 600 kilowatts used in residences on O`ahu and the Big Island to help pay for the biofuel.

THE NEW OCEAN VIEW WELL AND DISTRIBUTION OF WATER TO THE PUBLIC are subjects of a community meeting set for Wednesday, Aug. 29 from 5:30 p.m. to 6:30 p.m. at Ocean View Community Center. The Department of Water Supply issued a press release saying the meeting is a response to "increased reports of incorrect information in the community."
According to the statement, "The County has received reports of people taking excessive amounts and using the free water for agricultural and commercial purposes." It states that the six water spigots for the public in Ocean View are for personal, non-commercial use. Hawai‘i County Code states that for "the public water spigots, water use is limited to the legal weight capacity of the transporting vehicle." The Hawai'i County Code can be found online at hawaiicounty.gov/lb-countycode. For commercial use, the site provides access to ten water meters that were issued to the following people or companies for water hauling and/or delivery services: BJ'S Exc. and Hauling; Serenia A. Santana; Charles A. Smeade; Jordan A. Santos Kanakamaikai; Robert W. Pacheco; Casey R. Santana; Aaron K. K. Kalau; Steven P. Iona; Edwin Jr. Hao; and Jeffery R. Santana.
The water department also compares filling times for tanker trucks, stating that "Initially, standpipe estimates for fill time for a 4,000-gallon water tanker were 28 minutes at HOVE versus 22 minutes at Na`alehu. However, with some adjustment by DWS, the fill time at HOVE has been reduced to 20 minutes, or 2 minutes shorter than Na`alehu for a 4000 gallon tanker."
More information will be given at the community meeting. To download a copy of the press release see:hawaiidws.org.

RESULTS OF VOLCANO RAIN FOREST RUNS, held last Saturday on the streets of Volcano Village, are in. Billy Barnett, of Pahoa, won the Half Marathon with a time of 1:19:21. Amy Gordon, of Waialua, won in the Female Division at 1:38:25.
In the 10K, Chris Gregory, of Hilo, won with a time of 36:25. In the female division, Keri Ogden’s winning time was 42:56.
Todd Marohnic, of Volcano, won the 5K, coming in at 19:30. Shayli Nakamoto took the female division with a time of 22:31.
A total of 590 runners crossed the finish line, which set a new record for the event that serves as a fundraiser for Volcano Art Center. It drew many participants from other states, countries and the Hawaiian Islands. “We couldn’t be more thrilled with the turnout or more thankful for everyone’s incredible support,” says Volcano Art Center CEO Tanya Aynessazian. Registration increased nearly 20 percent over the 495 total finishers in the 2011 Rain Forest Runs. Aynessazian thanked Race Director Sharron Faff, the board members and staff of VAC, the Volcano community, The Cooper Center, the Volcano Community Association, GU, Kona Marathon, Eddie O. and Lava 105.3, Leilehua Yuen and Manu Josiah, the County of Hawai`i Department of Research & Development, the Hawai`i Tourism Authority, Kilauea Lodge, Barefoot Wine, Rotarians of Hilo Bay, Pahoa Sunset and Volcano, the Kea`au High School Cross Country Team “and the many, many volunteers who helped make this event possible, positive and fun for everyone.” 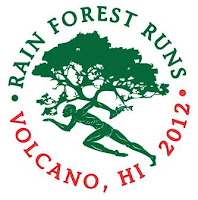 The race helped fill up restaurants and accommodations for several days in the Volcano area. See detailed race results at jtltiming.com/running.htm and photos of the Volcano Rain Forest Runs on rainforestruns.com.