COOPERATION ON CLEAN ENERGY INITIATIVES between the State of Hawai`i and the federal government was a topic of a roundtable discussion at the Asia-Pacific Economic Cooperation meeting in Honolulu yesterday. U.S. Department of Energy Secretary Steven Chu, Sen. Dan Inouye and Gov. Neil Abercrombie led talks aimed at partnerships for clean energy initiatives between the State of Hawai`i and the federal government.
The U.S. energy chief called the Hawaiian Islands “a perfect test-bed for us.” Those who convened talked about what is called “operationalizing” renewable energy, smart grid advancements, biofuel development, and building an interisland cable.
Inouye said: “Hawai`i is a natural alternative energy test-bed due in large part to the many partnerships we enjoy.” The senator pointed to the U.S. Departments of Energy and Defense as “active and valued partners to assist in the rapid deployment of renewable energy technology to reduce our dependency on fossil fuels. We must have the political will to stay the course not just for us but for the next generation. It is time to take our test-bed to the next level,” proclaimed Inouye.
The U.S. Secretary of Energy said, “The Obama Administration and Governor Abercrombie share a commitment to promoting the use of locally produced, clean renewable energy. As we compete in the global marketplace for the clean energy jobs of tomorrow, we need to continue to invest in the technologies that will create jobs here in Hawai`i and ensure American companies remain competitive. I look forward to continuing and growing the strong partnership between the Department of Energy and the State of Hawai`i,” Chu said.
Abercrombie added, “The partnership we have with the federal government is a key ingredient in reaching the goals we have as an island state. In reaching these goals, we are not only protecting ourselves from the volatility of outside fossil fuel markets, but are setting standards for the rest of the country and the world in the application of clean energy technologies.”
A participant from the Big Island was Barry Mizuno, of Puna Geothermal. Others included: Hawai`i Public Utilities Commission chair Hermina Morita along with PUC commissioner Mike Champley; Hawaiian Electric executive vice presidents Robbie Alm and Colton Chong; Richard Lim, director of the Hawai`i Department of Business, Economic Development & Tourism; Richard Carlin, head of the Sea Warfare & Weapons Department at the Office of Naval Research; Ross Roley, a senior military analyst with the PACOM Energy Office; and CMDR Joelle Simonpietre of PACOM J81, Innovation & Experimentation Energy Team. 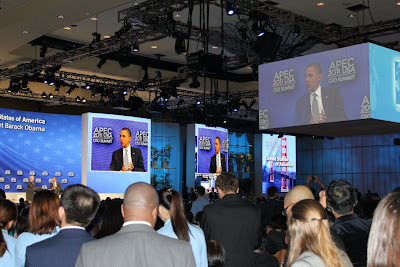 PRESIDENT BARACK OBAMA described his home state of Hawai`i at the APEC dinner in Honolulu last night “in the center of the Pacific.” He said: “Here we’re reminded of the progress that’s possible when people of different backgrounds and beliefs come together. This is the most diverse state in our nation, home to so many races and immigrants and Americans who trace their roots back to many of your countries.” Said Obama, “Hawai`i’s not perfect, but I think Hawai`i comes about as close as you’ll come to a true melting pot of cultures. Here we’re a single `ohana, one family.
“We remember that beneath the surface, behind all the different languages and some very long names, we all share the same hopes, the same struggles and the same aspirations,” he said. “And we’ve learned that we’re more likely to realize our aspirations when we pursue them together. That’s the spirit of Hawai`i. It’s what made me who I am. It’s what shapes my interactions with all of you. And it’s the spirit that I hope guides us in our work this weekend.”
KA`U COFFEE went to some APEC leaders as a gift provided by the Volcano Project and Ka`u Coffee Mill. Ka`u Coffee Mill is milling and roasting coffee just off Wood Valley Road and is developing a hydroelectric system that could take it off grid, with electricity to run the mill and the nearby macadamia husking plant operated by Olson Trust, said land manager John Cross.
FREE-RANGE KA`U BEEF was another product served at APEC. Chef Mark Noguchi chose the Galimba family’s Kuahiwi Ranch short ribs for a dinner.

MONEY FOR MAINTENANCE OF THOUSANDS OF ACRES of county land purchased through what is known as the Two Percent Land Fund comes up before the County Council Finance Committee this Tuesday at its Kona meeting in the West Hawai`i Civic Center. A measure proposed by council member Brenda Ford would set aside .25 percent of property tax revenues to take care of these lands. The majority of them are in Ka`u, including 3,000 acres at Road to the Sea between Ocean View and Manuka, and more than 1,000 acres between Honu`apo and Punalu`u. The funds could total about $500,000 a year. The maintenance fund would be capped at $3 million, with any excess going into the open space land fund used to purchase properties for preservation.
One plan would allow nonprofit organizations to apply for grants of up to $20,000 to perform maintenance and conservation work. Such community organizations as Ka `Ohana O Honu`apo, who partners with the county in maintaining the park, could apply.
According to a Stephens Media report, Ford said that the money would not be available for constructing new facilities on the public lands. “This is maintenance. This is so the land doesn’t degrade in some way. What this fund is not supposed to be is drained by capital improvement projects we don’t even know about today.”
According to the story by Erin Miller, there is discussion about whether to provide the maintenance money to the Finance Department of the Department of Parks and Recreation.

VOLCANIC HAZE SAT OVER KAPAPALA & PAHALA this morning for an unusually long time, as compared to the mostly clean air experienced over the last year. According to the Hawai`i Short Term Advisory Map, air was classified as Unhealthy for Sensitive Groups beginning at 12:15 a.m. this morning, and had remained for more than eight hours until returning to a good level as of 8:45 a.m. Recent trends have shown Moderate SO2 lasting for 15 minutes and a half hour, and usually less than a couple of hours. The air quality monitor is stationed on the grounds of Ka`u High School and can be seen at www.hiso2index.info.

AN EARTHQUAKE MEASURING a magnitude of 3.3 occurred along the coast eight miles east of Pahala at about 2:15 a.m. this morning.
THE ANNUAL KAHUMOKU MUSIC & LIFESTYLE WORKSHOP wrapped up in Pahala yesterday. In addition to the singing, guitar, steel guitar, cello, violin and hula lessons, students learned lauhala weaving under the guidance of Auntie Kaiwi Perkins. Ka`u youth can sign up for free attendance at the weeklong workshop set for 2012 by calling Keoki Kahumoku at 935-0643.

THE KA`U FOREST RESERVE is the subject of an Environmental Assessment for its management plan. Ron Terry, of Geometrician Associates, which is conducting the study, discusses the Reserve at the next Ka`u Chamber of Commerce meeting on Friday at 3:30 p.m. at Punalu`u Bake Shop.
Posted by The Ka`u Calendar at 10:55 AM Links to this post