WITH NO HAWAIIAN IN CONGRESS next year for the first time since Sen. Dan Akaka took his seat 36 years ago, Hawai`i’s new U.S. senator, Brian Schatz, is expected to champion the Akaka Bill, which would bring additional rights to Native Hawaiians to govern their communities and their lands. After the swearing in of Schatz yesterday in the Senate Chambers in Washington, D.C., Akaka predicted that Schatz “will advance freedom and equality…. He will defend native Hawaiians and all of our nation’s First People, those Americans who exercise sovereignty on lands that later became part of the United States. He will uphold the values and priorities of our unique state,” said Akaka, who is retiring from the Senate as the author and champion of the Hawaiian rights legislation.

Akaka described Schatz as “a leader for Hawai`i’s present and its future.” He said “Schatz arrived in Washington at a sad time when we continue to mourn the loss of our champion, Sen. Daniel Inouye,” who also supported the Akaka Bill. Inouye was honored yesterday with a service attended by some 500 people at Afook-Chinen Civic Auditorium in Hilo.
Schatz, 40, was born in Michigan but moved to O`ahu with his parents at the age of two. He has been involved in many social justice and environmental issues and was named top legislator in caring for the environment by the Sierra Club. He served in the state House of Representatives for four terms.
Akaka told Schatz, “I am here to help you in any way I can.” Akaka said members of the congressional delegations “have always put Hawai`i first before our individual ambitions. We must continue that. Hawai`i comes first.”

A RAINBOW OF RELIGIONS colors the background of Hawai`i’s new congressional delegation. Newly appointed Sen. Brian Schatz is Jewish. Sen. Mazie Hirono is Buddhist. Rep. Colleen Hanabusa is Buddhist, and Rep. Tulsi Gabbard is Hindu. The new delegation marks the first without an elected official with a Christian background serving in Congress.

SHAN TSUTSUI is promising to be a “liaison for the Neighbor Islands in his new role as lieutenant governor for the state of Hawai`i. Tsutsui accepted the position yesterday, replacing Brian Schatz, who left the post to replace the late Sen. Dan Inouye in the U.S. Senate. Tsutsui, 41, was president of the state Senate, elected from Maui. He told the Maui News that he negotiated the liaison aspect of his new job with Gov. Neil Abercrombie. “I look at this as an opportunity that really shows a commitment to Neighbor Island folks that they can have access,” he told Maui News reporter Nanea Kalani.
Tsutsui will also be allowed carry out part of his work while based in Maui. The arrangement gives the capital an annex on a Neighbor Island, harkening back to Hawaiian Kingdom days when the capital moved between the islands. It was in Waikiki from 1795 to 1796, when it moved to Hilo and stayed until 1803, when it moved back to Honolulu until 1812, when it moved to Kailua-Kona until 1820. In 1820, the capital of the Kingdom moved from Kona to Lahaina, where it remained until moving permanently to Honolulu in 1845.
With Tsutui’s departure from the state Senate, Sen. Donna Mercado Kim has been selected to replace him as Senate President.

HAWAI`I VOLCANOES NATIONAL PARK has concerns about a proposed commercial heliport close to its boundaries, and the county Planning Department is considering a contested case hearing. The heliport, according to a story in today’s Pacific Business News, would be operated by Paradise Helicopters, and the landing pad would be within 100 yards of the east boundary of the park in Royal Gardens, accommodating up to four flights a day. 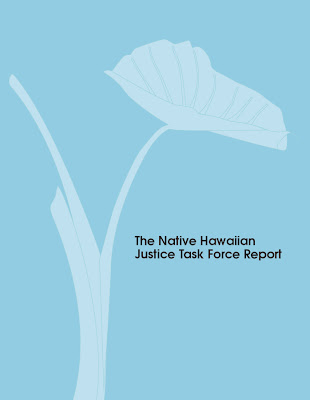 THE NATIVE HAWAIIAN JUSTICE TASK FORCE has presented its findings and recommendations to the Hawai`i Legislature. The 28-page report reflects the perspectives and insights of more than 159 people who participated in various community meetings across the state in July and August. The meetings prompted the Task Force’s 49 findings and 38 recommendations for addressing longstanding concerns about the disproportionate number of Native Hawaiians who are in prison in Hawai`i and the U.S. mainland.
Among the key findings is a lag in efforts to give Native Hawaiian inmates a fighting chance when they get out of prison. Key recommendations include an emphasis on education to reduce the rate of recidivism and to “give Native Hawaiian inmates hope for their future.”
“Native Hawaiians are over represented at every stage of the criminal justice system,” said Michael Broderick, chair of the task force and CEO at YMCA Honolulu. “With its findings and recommendations, the task force has laid the groundwork for real change. But for anything significant to change, all of Hawai`i must take responsibility to address this unacceptable and sad reality.”
Kamanaopono Crabbe, vice chair of the task force and CEO at Office of Hawaiian Affairs, added, “There is no looking away from this issue. The task force’s recommendations provide an opportunity to take meaningful action. We no longer have an excuse not to try.”
In 2011, OHA advocated for the passage of Act 170 to create a task force to formulate policies and procedures to eliminate the disproportionate representation of Native Hawaiians in Hawai`i’s criminal justice system by looking for new strategies to reduce or avoid unnecessary involvement of these individuals with the criminal justice system. Act 170 also calls for recommendations of culturally and fiscally cost-effective mechanisms and legislation and policies to reduce or prevent individuals’ unnecessary involvement in the system.

POHAKULOA TRAINING AREA is offering opportunities for hunters tomorrow and Sunday. Keamuku Manaeuver Area is open for shotgun bird hunting, and Training Areas 1-4 and 9-15 are open for bow hunting of mammals. Hunters check in at Kilohana Station after 5 a.m. and check out before 7:30 p.m. Hunting passes are available after 5 p.m. today. For more information, call Bob McElroy at 969-2427.

VOLCANO ART CENTER’S 13th Annual Invitational Wreath Exhibit continues through Jan. 6 at the gallery in Hawai`i Volcanoes National Park. Gallery artists, working in a wide variety of media, materials, and techniques, present their concepts of “wreath,” from the whimsical to the traditional. Hours are 9 a.m. to 5 p.m. daily, and park entrance fees apply.