KA`U SCENIC BYWAYS COMMITTEE held a blessing yesterday  for the new educational roadway signage  designed for the Ka`u community and its visitors. The blessing, given by Ka`u Hawaiian Civic Club President Blossom DeSilva and attended by Gov. Neil Abercrombie representative Barbara Dalton, was held at the South Point Lookout near Ocean View at Mile Marker 75 on Hwy 11.
Roberts Tours leader and driver Harvey Damo proclaimed: “It’s about time, as his passengers photographed the sign and the views of the lava fields, Kalae Point and the shoreline, the longest uninhabited coast in Hawai`i.

The Ka`u Byway Committee of the Ka`u Chamber of Commerce has been working on the signage, under Chair Marge Elwell, for two years. Byway Committee secretary Dennis Elwell said, "The signs have been very well received. We have met visitors from as far as Austria and Japan," photographing them and reading about Ka`u.
Funding came from the natural resources program of the Hawai`i Tourism Authority, with some matching funds from Ka`u Chamber of Commerce. The Byway Committee is working on a management plan through the state Department of Transportation and looks toward establishing six additional turnouts with signage to inform people about the beauty of Ka`u and its natural and cultural history. "We are trying to tell a story and help visitors understand they are traveling around a huge volcano as they approach Hawai`i Volcanoes National Park," Elwell sadi.
In addition to the signage Ka`u Scenic Byway - the Slopes of Mauna Loa - Hawai`i, is represented
on a website with information about many features of Ka`u. See www.hawaiiscenicbyways.org and click on Ka`u.

SCHOOL COMMUNITY COUNCIL ELECTIONS are coming up at Na`alehu Elementary School. The school is seeking individuals to serve as a community member representative or a parent representative on the council. The nomination period began on Monday, Oct. 21 and will continue for two weeks ending on Friday, Nov. 1.
Following the nomination period, an informative session for SCC candidates will be held on Thursday, Nov. 7 at Nā'ālehu School in Room 33, from 3 p.m. to 4 p.m. Voting will be held from Friday, Nov. 8 to Friday, Nov. 15. Each family with children attending Nā'ālehu School will receive one ballot, which will be sent home with the oldest child in the family.
A full school community council includes six stakeholder groups: teacher, administration, classified staff, parent, student and community. The role of the community member is defined as an individual living within the school's geographic area; owning or operating a business in the community, or who is an alumnus of the school. A representative in the parent role must be an individual with a child currently enrolled at Nā'ālehu Elementary. SCC meetings are held the first Thursday of each month. "SCCs focus their responsibilities on school improvement and student achievement. From a best practices point of view, councils that focus on student achievement are by far more successful. They tend to see themselves as trustees or facilitators of the school's vision and mission, and are very clear about what the school stands for and what it wants for students," stated Principal Darlene Javar.
"Successful councils practice good stewardship and act as a whole, taking responsibility for communicating with all role groups and for the benefit of all children rather than as individuals representing a role group and specific agendas. The SCC provides an opportunity for input to the school's Academic and Financial Plan as well as recommendations for revisions," Javar added.
Interested persons can contact Denise Garcia, Parent Community Networking Center coordinator, at 313-4020, or email Denise_Garcia@notes.k12.hi.us. Nominations must be received by Friday, Nov. 1.

"RANCHING ON THE HILLY, ROCKY DROUGHT-PRONE terrain of Ka`u requires tenacity - not to mention cattle that can handle the rugged environment,” states an article in yesterday's Honolulu Star Advertiser about the Al Galimba family growing heritage livestock on land between Pahala and Na`alehu.  The story, by Joleen Oshiro, reports: “ The Galimbas, owners of the 10,000-acre Kuahiwi Ranch in Ka`u, delved into research to find such a cow and discovered the British White, a heritage, or ancient, breed of cow traced back in the United Kingdom to the Roman Empire.”
The story quotes rancher Michelle Galimba, who runs Kuahiwi Ranch with parents Sami and Al Galimba and brother Guy, as saying that "British Whites have good, strong feet and legs to handle the rocks and hills, and they gain weight easily in less-than-ideal pasture.”
The Star Advertiser writer noted that “On the plate, the beef has a mild taste rather than a strong grassy flavor, and unlike many grass-fed cattle, some of its fat is marbled into the flesh.
"Kuahiwi's experience with the British White illustrates the practical application of heritage breeds to a viable, localized food system.
In fact, the ranch has been so successful with British Whites that it is now able to supply Whole Foods Market with 10 head a month.”
The Galimbas will offer tasting of their British White Beef at Whole Foods on O`ahu in Kailua this Saturday from noon to 4 p.m. and at Whole Foods Kohala on Sunday from 11 a.m. to 3 p.m.
Chef and restaurateur Alan Wong was quoted in the story as describing the Kuahiwi beef as “a great product," Wong told the reporter that "The most important thing is how the animals are cared for, what they are fed, and Al Galimba takes good care. It's a locally raised product by a local family, and I always support that." See more at www.staradvertiser.com.  Also see www.kuahiwiranch.com

THE COST OF COMMERCIAL TRASH HAULING COULD SOAR, as county fees may follow the nearly 300 percent increase in surcharges proposed by the state on landfill operations. According to a story in this morning’s Hawai`i Tribune Herald, “The surcharge, currently 25 cents to 25 cents a ton, could rise to as much as $1.35 a ton under a bill that has so far seen little traction in the state Legislature. Writer Nancy Cook Lauer explained that the state surcharge pays “for the state Department of Health’s monitoring of solid waste operations.” According to the story, county Environmental Management Director Bobby Leithead Todd is considering “whether the county would be better off adding a cost factor, similar to the Department of Water Supply’s power cost component on water bills, to account for costs the department has no control over.”
The story reports that tipping fees account for about $6.3 million of the $25 million county solid waste budget. However, costs for fuel, equipment, and union labor keep going up. See more at www.hawaiitribune-herald.com
Commercial trash hauling in Ka`u is particularly expensive, requiring a long drive to Hilo or Kona, as, technically, no commercial trash is allowed at the public transfer stations. The old practice of dumping on open land or into gulches can draw steep fines. Even those collecting trash from an elderly person’s home, if paid, are supposed to be hauling it to designated tipping stations in Hilo or Kona, a distance that garners a huge expense in fuel and time.
Hawaii Zero Waste organizers recommend that everyone Reduce, Reuse and Recycle to cut down the expense of garbage. See
www.hawaiizerowaste.org.

ANOTHER LAW SUIT has been filed in the tragic accident that left Ka`u residents Trini Ballesteros and Richard Taylor and three visitors dead near the Punalu`u Stream bridge on Highway 11. The law suit is being brought by the family of Taylor against the family estate of Donald and Patricia Ingoglia. Donald Ingoglia, who died along with his son and grandson, was the driver of the Nissan Altima rental car, whom the plaintiffs claim negligently crossed the center line and crashed head-on into the 2002 Ford F-350 dually pickup truck that caught on fire. The accident killed all five. Another suit was recently filed by the family of Trinidad Ballesteros. See more at www.hawaiitribune-herald.com.

A WALK IN THE PAST resumes now that Hawai`i Volcanoes National Park has reopened. Kilauea Drama Network reports that the first Walk in the Past will be next Tuesday, Oct. 29 at 10 a.m.
The program features a living history presenter, dressed in period costume, bringing back to life Dr. T. A. Jaggar, founder of Hawai`i Volcanoes Observatory and a prominent figure in the history of volcanology, the study of volcanoes. Ka`u actor-director Dick Hershberger portrays Dr. Jaggar.
Hershberger’s extensive experience on the many theatrical stages of the Big Island has finally brought him to a new venue in HVNP. He has performed with Aloha Performing Arts Company, Waimea Community Theater, The Palace and University of Hawai`i Hilo and Kilauea Drama & Entertainment Network.
The program takes place in the Whitney Vault, a 16 feet by 12 feet underground laboratory that still has original seismograph equipment, and is located under a mound in front of the Volcano House. The time is April 1912 when travel was by ship, train horse and carriage. There were only four airplanes in America. Teddy Roosevelt was running for President and the Red Sox won the World Series.

Thomas Jaggar moved to Hawai`i from his offices at The Massachusetts Institute of Technology, where he was the head of the Geology Department, in order to study firsthand the activity of Kilauea and Mauna Loa, thereby gaining valuable knowledge about the inner workings of earth systems. He founded the first geologic observatory dedicated to saving lives. He co-founded the Park itself. It was Jaggar’s vision that inspired the idea of predicting geologic hazards worldwide.
Performances of A Walk into the Past will be every other Tuesday, at 10 a.m., noon and 2 p.m., starting Tuesday. Meet at the Kilauea Visitor Center. There is no charge for the performance, but park entrance fees do apply.

VOLCANO ART CENTER GALLERY is open for winter hours, from 9 a.m. to 5 p.m. daily. The non-profit is looking for community support and is fundraising, following the federal shutdown that
closed the gallery for more than two weeks.
Call 967-8222.

TUTU & ME HOSTS ITS FIRST-EVER `OHANA DAY this Saturday from 10:30 a.m. to 12:30 p.m. at Pahala Community Center.
Activities represent a typical day at Tutu & Me. Families, keiki and kupuna from the local community are invited to participate in fun learning activities that Tutu & Me provides every Tuesday and Thursday throughout the school year at the community center, along with live music, health screenings provided by Hui Malama Na `Oiwi and Ka`u Rural Health Community Organization, giveaways and a raffle. 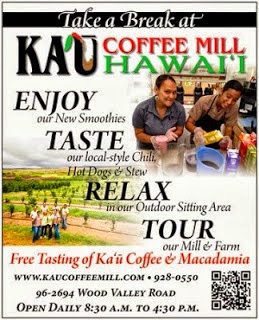 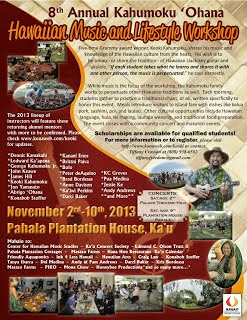 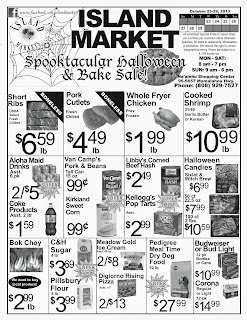 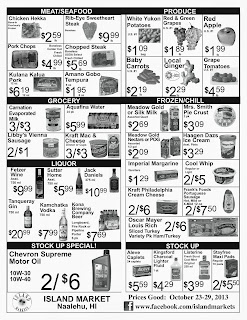 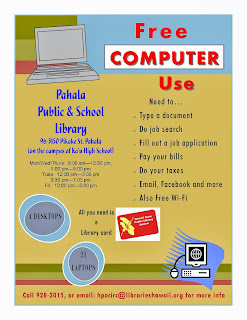 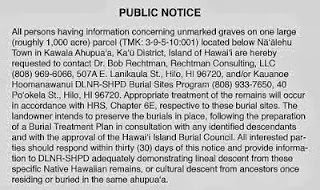