`IO, THE HAWAIIAN HAWK, could be taken off the federal endangered species list where the bird has been protected since 1967 when the population was estimated at a few hundred. With the count now estimated at around 3,000, the U.S. Fish and Wildlife Service issued a request on the Federal Register yesterday to reopen pubic comment for its proposal to remove `Io from the List of Endangered and Threatened Wildlife under the Endangered Species Act.
The `Io is seen frequently in Ka`u, from the grounds of Ka`u Hospital to yards, pastures, forests and nearshore parks. Ironically, the `Io prey on the young of another endangered species, the `Alala, Hawaiian crow.
`Io are also protected by the Migratory Bird Treaty Act. Comments on delisting the `Io were previously accepted in 2008 and 2009, but additional comments will be received. To read more on the proposal for delisting, see http://federalregister.gov/a/2014-02982. Testimony can be submitted through http://www.regulations.gov for 60 days, beginning Feb. 14. To comment on or like this story, go to facebook.com/kaucalendar 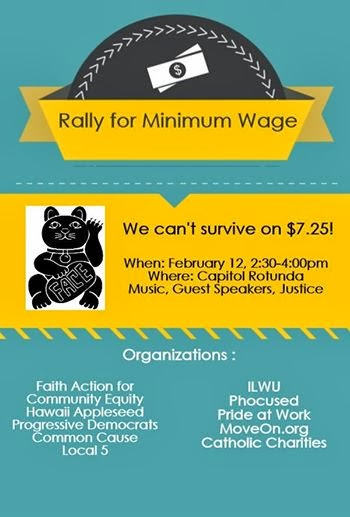 MINIMUM WAGES IN HAWAI`I, which have remained at $7.12 an hour since 2007, are the subject of intense debate at the state legislature this session. Hawai`i has one of the highest costs of living in the U.S. and 21 states have higher minimum wages. Minimum wages by state range from no minimum wage in Alabama, Louisiana, Mississippi, South Carolina and Tennessee to Washington state where the minimum wage is $9.32. During his recent State of the State Address, Washington governor Jay Inslee said the wants to again raise the minimum wage, this time to $11.82 or higher to help remedy “50 years of income inequality.”
While Hawai`i legislators themselves have enjoyed a 12 percent increase in their pay over the last seven years, they have been unable to come to an agreement on how to handle the push to increase minimum pay in Hawai`i.
A bill in the state House of Representatives, HB 2580, would raise the minimum wage over time, reaching $9.50 an hour by January of 2017. Thereafter it would adjust through using the consumer price index. The tip credit would be dropped. State Senate Bill 2609 would raise the minimum wage to $10.10 an hour by January 2017 and would also use the consumer price index as the regulator of future minimum wage increases. The tip credit would be cancelled.
During the 2013 legislature, the minimum wage increase failed over debates about the tip credit. The tip credit gives restaurant owners tax credits for accurate reporting of tips by their employees.
A coalition called Hawai`i Needs a Raise held a rally yesterday afternoon at the state Capitol, asking for a $10.10 minimum wage and elimination of the tip credit. Members of the group, which represent Hawai`i Appleseed, Hawai`i Commission on the Status of Women, Local 5 and other anti-poverty groups, gathered at the Capitol and their representatives marched to the office of the Chair of the Senate Ways and Means Committee and also the office of House Finance Committee chair. Honolulu Star Advertiser reporter Derrick Depledge wrote this morning that "Skirmishes over process are often early warning signs that legislation is in trouble. At the start of session in January, there was broad consensus among Abercrombie and majority House and Senate Democrats for a minimum wage increase and some reasonable accommodation on a tip credit. Opponents had largely been pushed into the margins." See more at www.staradvertiser.com.
To comment on or like this story, go to facebook.com/kaucalendar 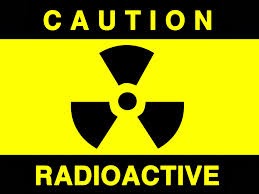 RADIATION MONITORING is closer to reality as SB 3049 proposed by Pahala resident Sara Witt has passed the state Senate health committee and was sent to the Committee on Energy & Environmental Protection. If it passes that committee, it would go to the Senate’s Ways & Means Committee, which takes care of funding. The bill would fund monitoring around the state of Hawai`i to determine radiation levels in the wake of the Japan Tohoku earthquake, tsunami and nuclear power plant disaster on March 11, 2011. The nuclear power plant at Fukushima continues to leak radiation into the ocean where it can be lifted into the air and re-depostited here. Senate Bill 3049 was introduced by east Ka`u Sen. Russell Ruderman and west Ka`u Sen. Josh Green, a physician who heads the Senate health committee. West Ka`u Rep. Richard Creagan, also a physician, and Rep. Fay Hanohano introduced the House version.
The monitoring would be in food, dairy products, rainwater, aquifers and drainage ditches. The state Department of Health would report radiation levels on a website. The program would start July 1 and run through June 30, 2019.
To comment on or like this story, go to facebook.com/kaucalendar.
GEOTHERMAL PROJECTS would be come under more county control if either state House of Representatives measure, up for consideration today, passes through committees and earn legislature approval. House Bill 1766, introduced by Faye Hanohano, of Puna, would would revise Hawai`i law on regulating mineral resources to limit geothermal plants to geothermal subzones which were eliminated by the legislature in 2012 through Act 97.
The state Board of Land & Natural Resources would establish the geothermal zones and issue permits for geothermal development on lands classified Conservation. The county would handle permitting on other lands. The bill would establish permit requirements requiring assessments of geologic hazards; environmental, cultural and social impacts; compatibility with allowed uses in the
surrounding area; and determining whether potential benefits are in the interests of the resident population, county and state. The geothermal developer would be required to state potential for health, safety and nuisance impacts and would set up buffer zones between geothermal development and adjoining lands.
A different bill, HB 2639, would return authority to the counties for issuing permits on all land but Conservation district property. State Board of Land & Natural Resources chair William Aila, Jr. testified that his deparment "does not oppose restoring home rule authority throught the issuance of geothermal resource permits, as we believe each individual county should maintain its authority to regulate use that occurs within its appropriate land use districts."
There would be no geothermal subzones. However, there would be standards for approval of projects when they are without unreasonable health, environmental or socioeconomic impacts on nearby residents; when they don’t burden government with new infrastructure costs; and when the geothermal developers are able to prove reasonable measures to mitigate impacts. This bill would require some of the revenues from geothermal to be placed in a fund for land, administered by the state Department of Land & Natural Resources. Both bills were up for public hearings today in committees.
To comment on or like this story, go to facebook.com/kaucalendar .
FREE ADMISSION TO HAWAI`I VOLCANOES NATIONAL PARK celebrates, on Saturday, Sunday and Monday, the connections between national leaders and all 401 National Park Service sites during Presidents Day weekend, Feb 15-17.  The National Park Service will also waive admission fees on five additional days in 2014 – the first weekend of National Park Week (April 19
and 20), the National Park Service’s 98th birthday Aug. 25, National Public Lands Day on Sept. 27, and Veterans Day Nov. 11.
Hawai‘i Volcanoes is one of five national park units on the Island of Hawai‘i. Pu‘uhonua o Hōnaunau National Historical Park is also free of charge on the NPS fee-free 2014 dates. Pu‘ukoholā Heiau National Historic Site, Kaloko-Honokōhau National Historical Park, and the Ala Kahakai National Historic Trail do not charge entrance fees. National park passes that provide free or discounted admission year round are available for active duty military members and their dependents, senior citizens, and people with permanent disabilities. To comment on or like this story, go to facebook.com/kaucalendar.
HANA HOU RESTAURANT in Na`alehu offers Valentine’s Day dinners Friday and Saturday from 5 p.m. to 8 p.m. Special menu items include prime rib, crab lasagna and garlic shrimp, baby back ribs with guava BBQ glaze and baked mahi mahi stuffed with crab and scallops. Meals include starter and dessert for $30 per person. Earnest Kalani provides entertainment on Friday.
Call 929-9717 for reservations. 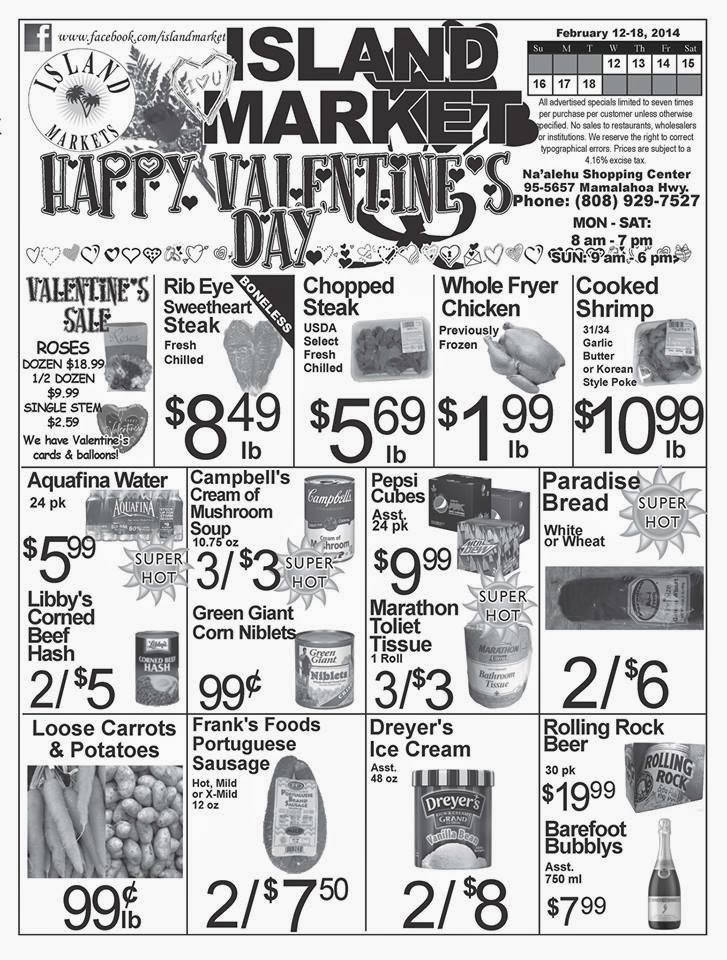 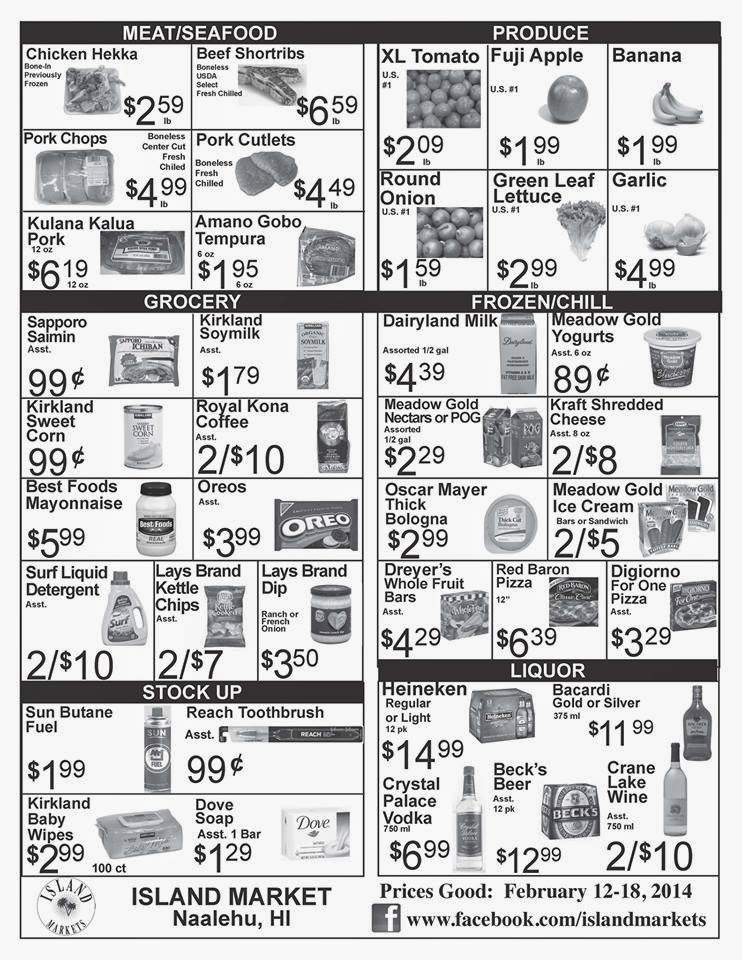