REOPENING KULANI PRISON, which shut down in 2009, is under study by the state with Gov. Neil Abercrombie releasing $248,177 for environmental studies and planning on Friday. While the prison would hold only about 200 inmates and likely remain minimum security with vocational training, Kulani would be part of the Justice Reinvestment Initiative that would help bring back inmates sentenced by the Hawai`i justice system but imprisoned on the mainland. Advocates say the funding spent on housing inmates in mainland prisons would be better spent here with prisoners having a better chance of being rehabilitated in Hawai`i, closer to families and culturally appropriate social services.


HAWAI`I YOUTH CHALLENGE ACADEMY may have to find a new place or share the 640-acre Kulani Prison site, should the prison reopen. Hawai`i Youth ChalleNGe Academy is run by the Hawai`i National Guard with help from volunteer mentors. The academy is an alternative school with the mission “to provide opportunities for at-risk, non-traditional students to learn life skills, to become productive, responsible and successful citizens while working toward their high school diplomas.” In addition to classroom learning, Youth ChalleNGe has helped students achieve such outside skills as lifeguard training and robotics. See more at ngycp.org/site/state/hi.

STATE CONSUMER ADVOCATE Jeffrey T. Ono has “questions and concerns regarding the reasonableness” of the proposed contract for `Aina Koa Pono to sell biodiesel at a fixed rate for 20 years to Hawai`i Electric Light Co. In his Division of Consumer Advocacy Preliminary Statement Position, Ono wrote to the PUC on Aug. 22, saying the Consumer Advocate will determine whether HELCO and `Aina Koa Pono have sufficiently addressed concerns raised by the PUC in its Decision and Order rejecting a similar HELCO/ `Aina Koa Pono biofuel contract in 2011, as well as issues put forth by the Commission on Aug. 9, 2012.
Concerns of the PUC include tying up the cost of purchasing the biofuel for 20 years and the impact on other renewable energies. “As a result of these and other concerns, the Consumer Advocate is unable to presently state its position on the merits of the application and cannot offer its recommendation to the Commission regarding whether the application should be approved or denied,” Ono wrote. The Consumer advocate said he will soon issue information requests to further study the `Aina Koa Pono – HELCO proposal.
Last year the Consumer Advocate took the position of opposing the intervention of consumer and environmental group Life of the Land into the proceeding. However, for this year’s proposal, Ono wrote to the PUC on Thursday, saying, “The Division of Consumer Advocacy, Department of Commerce and Consumer Affairs (‘Consumer Advocate’) respectfully represents that the Consumer Advocate is not taking a position on the Life of the Land’s Motion to Intervene.”  The proposal involves using pasture and other lands between Na`alehu and Pahala to clear and plant biofuel crops and building a refinery off Wood Valley Road, above Pahala, providing 400 construction jobs and 200 permanent jobs, according to `Aina Koa Pono.

KA`U DIRECTORY COVER CONTEST reception to view all the winners and greet the artists will be 9 a.m. to 11a.m. on Saturday, Oct. 6, with light refreshments at the CU Hawai`i credit union office in Na`alehu.
The show will be open to the public beginning Oct. 1, Monday through Thursday from 9 a.m. to 5 p.m., Friday from 9 a.m. to noon and Saturday from 9 a.m. to 11 a.m. Entries will be accepted on Friday, Sept. 28, from noon until 5 p.m. and Saturday, Sept. 29, from 9 a.m. to 11:30 a.m.
Categories are Graphic, Sculpture, Wood, Photography and Craft, and all pieces must have been completed in the last 12 months. The fee is $5 for each artwork. “We request that all pieces be for sale for the usual price, Keiki exhibits excepted,” said Ka`u Chamber of Commerce president Dallas Decker.
The Keiki Division is for children in grades one through six, one entry per keiki. Keiki categories are graphics and photos, no larger than 8.5 by 11 inches, including frames, if any. The entry fee is $1, and these entries are not eligible for the cover of The Directory. Only the first 60 Keiki exhibits will be accepted.
Each day during the showing, Oct. 1 - 6, the public may sign in and receive a ballot to vote for their favorite exhibit. The adult winner of the popular vote will be featured on the cover of the 2013 Ka`u Directory, with appropriate credit being given inside.
The ballot, a numbered ticket, will also be entered into a drawing for door prizes to be held each hour, and the winner does not need to be present to win. Prizes are being donated by various Ka`u merchants.
This year, a panel of local artists will judge all exhibits and award prizes in each category, including Best in Show. Each category will be rewarded with first, second, and third prizes and, if appropriate, as many as two honorable mentions. Ribbons will be given for each of the prizes, and all first-prize winners will appear in the 2013 Ka`u Directory.
Entry forms will be made available at local schools and merchants and will be available at the door on Sept. 28 and 29. All entries must be picked up from the building by the artist between 11 a.m. and 11:30 a.m. on Saturday, Oct. 6 or between 9 a.m. and 12 p.m. on Monday, Oct. 8.
To donate door prizes or to help with expenses, call Karen Ingraham at 929-8484.

AN INTIMATE EVENING WITH JOHN CRUZ is tonight. Doors open at 6:30 p.m. at Volcano Art Center’s Niaulani Campus. For more, contact Dave Wallerstein at 967-822 or volcanoartcenter.org.

A GUIDED HIKE AT THE KAHUKU UNIT of Hawai`i Volcanoes National Park is set for tomorrow from 9:30 a.m. to 12:30 p.m. The two-mile hike explores pastures, a quarry, an airstrip and the vast Kahuku lands, with a focus on the areas human history from the earliest Hawaiians through today. Participants meet at the visitor contact tent near the ranch buildings. Bring boots, rain gear, long pants, water and a snack. 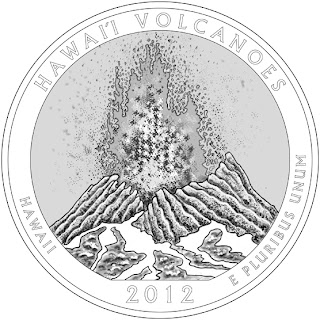 THE PUBLIC IS INVITED to the U.S. Mint’s ceremonial release of the Hawai`i Volcanoes National Park quarter on Wednesday from 1:30 p.m. to 3 p.m. HFS Federal Credit Union will provide $10 rolls of the commemorative quarters for exchange.
The new quarter is part of the Mint’s America the Beautiful Quarters Program. The coin features an engraved image of an eruption on Kilauea’s East Rift Zone on its reverse side and inscriptions that read Hawai`i Volcanoes, Hawaii 2012 and E Pluribus Unum. It was designed and sculpted by U.S. Mint sculptor-engraver Charles L. Vickers.
The Hawai`i Volcanoes quarter is the fourth quarter to be launched in 2012 and the 14th in a series of 56 circulating America the Beautiful quarters. The reverse side designs are symbolic of a national park or other national site in each state, the District of Columbia and five U.S. territories.
All coins in the program have a common heads side featuring a portrait of George Washington and the inscriptions United States of America, Liberty, In God We Trust and Quarter Dollar.
“This highly collectible quarter is a significant milestone for Hawai`i Volcanoes National Park, for the residents of Hawai`i and for the Hawai`i Island destination,” said park superintendent Cindy Orlando. “Now everyone will carry a reminder of Hawai`i’s first World Heritage Site in their pocket.”
County of Hawai`i Tourism specialist Stephanie Donoho will serve as master of ceremonies, and representatives from the U.S. Mint, the governor’s office and the state delegation will participate.
The ceremony takes place at the park’s Kahua Hula south of Kilauea Visitor Center on Crater Rim Drive. The event is free, and park entrance fees apply.

GIRLS TROJAN VOLLEYBALL starts its season on Tuesday night with a home game at 6 p.m. against Waiakea.