The state Office of Environmental Quality Control posted the document yesterday, with a letter from state Department of Land & Natural Resources Chairperson William Aila Jr., stating that the DLNR “has determined that this project will not have significant negative effect on the environment.” 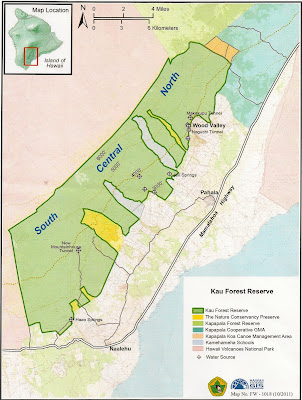 The plan is for the state Division of Forestry and Wildlife to manage the 61,641 acres Ka`u Forest Reserve “to maintain and restore key watershed, preserve a unique ecosystem with critically endangered plants and animals, perpetuate natural resources vital to Hawaiian culture and practices, find suitable sites to reintroduce the `Alala or Hawaiian Crow into the wild, and provide for continued and expanded public use,” says the project summary. It proposes to fence some of the higher elevation lands in the center of the Reserve “in which ungulates will be removed and the native forest protected.” The plan promises walkovers and gates along the fencing “to ensure public access into the management units… Alignment would avoid impacts to botanical, faunal and archaeological resources.” Trails for hunters and hikers would be improved and rare Hawaiian plant species would be reintroduced in selected areas. “Impacts to pig hunting, which is considered by many to be a cultural practice, would occur but be less than significant because of the proposed locations of the management areas,” which would be at higher elevations than where most pig hunters travel.
The statement says the agency “seeks to balance providing public hunting opportunities in the Reserve with the protection of native ecosystems and watersheds, and the Plan includes actions to substantially facilitate public hunting in the Reserve.”
Comments include hunters saying they are concerned about more land being cut off from their hunting grounds and resource managers saying that the balance is needed.
One hunter wrote about the planned release of the Hawaiian crow into the wild: “I think that the bird is good, but they should not eradicate the pig. Hunting is a lifestyle and a source of food, and a culture. I no think the pig make the bird go way cuz before had choke bird and plant but still had choke pig, now no more bird but no more pig either so if the pig affect the bird, wouldn’t have pig and would have bird.”
Another person wrote: “I support fencing to allow some areas to be kept free from feral pigs and the damage they cause. Pig free walking trails are a desirable future of the forest reserve.”

LEGISLATOR OF THE YEAR FOR GIL KAHELE is the award recently bestowed by the Hawai`i Psychological Association. The state senator for South Kona, Ka`u through Volcano and into Puna was lauded for “his outstanding contributions to psychology and mental health services in the state and for advocating for the care of the medically underserved,” says a statement from the organization.
“I am truly humbled with the award that the Hawai`i Psychological Association has given me and for recognizing the work that I have done in support of its mission,” said Kahele. “I will continue promoting medical care for those in need.”
According to a statement from the organization, along with his work in helping to advance medical care, Kahele has made preserving agriculture land a top priority as vice chair of the Senate Committee on Agriculture.
The mission of the Hawai`i Psychological Association is to enhance the quality of life for the people of Hawai`i by encouraging, integrating, applying, and communicating the contributions of psychology in all its branches.
With redistricting, Kahele is unable to run for the senate seat he holds and is running for a district that includes the site of his home in Hilo. Kahele also has a home in Miloli`i. Redistricting put incumbent Josh Green in the position to run for that Senate seat.

STRYKER ARMORED VEHICLES may be coming to the Big Island as the U.S. military plans to move more defense weapons, planes, ships and personnel to Hawai`i. The U.S. Defense Department is looking for a security front facing Asia with more of it based on U.S. soil, meaning Hawai`i and possibly Alaska. A story in this morning’s Honolulu Star Advertiser says that more equipment could come to the Big Island as the U.S. pulls out of Afghanistan in 2014. “The Army said it is considering basing Stryker armored vehicles at the Pohakuloa Training Area on Hawai`i Island as part of a larger plan to pre-position equipment, on land or on ships, around Asia and the Pacific to improve training, engagement and response times and to keep costs down,” the William Cole story says. See more at staradvertiser.com.


TWO KA`U RUNNERS TOOK FIRST PLACE in the first annual Keiki Triathlon in Kailua-Kona last Saturday. Nai`a Makuakane, of Na`alehu, came in first in the 13 to 14 year old group, with a time of 21:33:24 minutes. Kameron Moses, of Pahala, took first place for the 11-12 year old group with a time of 20:13:08 minutes. Kameron’s brother, Kobe Moses, of Pahala, competed in the 9-10 age group, and earned an Honorable Mention with a time of 26:49:39 minutes. The event hosted more than 70 participants beginning with a 100-yard swim, followed by a 3.2-mile cycle and finishing with a 1-mile run.
The triathlon was held in conjunction with Mayor Billy Kenoi's 2nd Annual Health Fest, designed to promote public health and wellness. County of Hawai`i Dept of Parks and Recreation, Hawai`i Isle Police Activities League, and Peoples Advocacy for Trails Hawaii sponsored the event.
PATH, founded in 1986, is a grassroots, community-based, non-profit public access advocacy organization serving the County of Hawai`i. The organizations website, pathhawaii.org, states their mission is “to safely connect people and places on Hawai`i Island with pathways and bikeways.”


TO COMMEMORATE THE 25TH ANNIVERSARY of its World Heritage Site status and the 40th anniversary of the international World Heritage Convention, Hawai`i Volcanoes National Park is offering two events this week, one at the park and one at the Fairmont Orchid.
A special World Heritage After Dark in the Park presentation takes place tonight at 7 p.m. in Kilauea Visitor Center Auditorium. This event is free, and park entrance fees apply.
World Heritage Anniversary Roundtable is tomorrow from 1 p.m. to 4 p.m. at the Fairmont Orchid. Admission and parking is free. RSVP online at eventbrite.com, or contact Jessica Ferracane at 985-6018 or jessica_ferracane@nps.gov.

PAHALA OPEN AIR FARMERS MARKET is open every Wednesday from 7 a.m. to noon across the street from Ka`u Community Radio on the old Pahala Theatre parking lot on Olson Trust Land. Participants this morning, in its third week of operation, include Ellis and Sokkah Hester with their fresh vegetables grown on the hillside above Pahala; Lisa Dacalio with her Moa`ula Coffee and hand painted gourds; Steve Roscoe with his fresh baked Island Valley Delights, jams, jellies and fresh eggs; Joy Okinisi from McCall’s Flower Farm; Malian Lahey with her edible treats, chai tea and Ka`u Specialty Coffee; and Brenda Iokepa-Moses with coffee, art cards and gifts from Ka`u Coffee Mill. The market is organized by Ka`u Community Radio, Inc.

KA`OHANA O HONU`APO IS POSTPONING its free family music event, Kanikapila 2, that was scheduled for this Sunday, Oct. 28, at Honu`apo Park, according to the organizations executive director Lehua Lopez-Mau. “This event will be re-scheduled for early next year.”

MAKUA LEGEND HUNTING TOURNAMENT has set a signup deadline for Nov. 24. Organizer Ty Chun said, “Mauka Legend Hunting Tournament Dec. 8 is a memorial in loving memory of our brother Ceasare ‘Chaz’ D.K. Moses, to honor his favorite pastime – hog hunting. In addition to honoring our brother, we plan on raising awareness in the community about Hunter and Ocean Safety.” Moses passed away on June 4 in a fishing accident at South Point.

The event headquarters where hunters will bring their prey will be Old Pahala Clubhouse on Maile Street in Pahala. Weigh-ins will be held from 1 p.m. to 5:30 p.m. There will be three categories: Biggest Boar, Biggest Sow, and Longest Tusk. Entry fee is $40 per team.
The event also includes live entertainment by local bands. “We are also in the process of working with the DLNR to have an educational booth there,” said Chun. There will also be a food booth run by the Moses `Ohana. “This is a family friendly event, so we invite everyone, participating or not, to come on down and enjoy the music and `ono food.” For entry forms and sponsorships, contact Chun at 985-9056, 557-8594 or tikeytai@aol.com.

KA`U HIGH GIRLS VOLLEYBALL took first on the island and will compete in the finals on O`ahu next week, starting Wednesday.