REOPENING OF KULANI PRISON is being considered by the state Legislature and Hawai`i County Council. House Bill 200 HD1 SD1, relating to the state budget, appropriates almost $4.7 million for the prison over the next two fiscal years. A conference committee in the Legislature is considering this and other appropriations during budget negotiations this week.
A resolution on this week’s Hawai`i County Council meeting agenda urges the 2013 Hawai`i State Legislature to support funding and pass the legislation.
The Council resolution says reopening Kulani will create up to 90 new jobs. It also supports a proposal to integrate a program which would incorporate Hawaiian cultural traditions in preparation for reintegrating prisoners to be released from prison, such as the Pu`uhonua Alternative Program.
Samuel Kaleleiki, president of Ohana Ho`opakele, described Pu`uhonua as “places open to all, not just Kanaka Maoli, where the traditional ho`oponopono process of making right will be used to help heal individuals, families, and communities. We believe Pu`uhonua centers are for the good of all Hawai`i’s people and can provide real hope in saving money, reducing recidivism, crime prevention and long-term positive change.”
County Council meets Wednesday at 9 a.m. at West Hawai`i Civic Center in Kona. Ka`u residents can participate via videoconference at Ocean View Community Center, 92-8924 Leilani Circle. The videoconferencing system is available until 3 p.m. or later if public witness testimony has not been completed. For more information, call 961-8536 or edistrict6@co.hawaii.hi.us.

FOLLOWING FRIDAY’S DECISION by the state Board of Land and Natural Resources to allow plans for the Thirty Meter Telescope on Mauna Kea to move forward, opponents vowed to continue to protect the mountain from further development.
“We’re not going to go away because of one bad ruling,” Nelson Ho, co-chair of the Mauna Kea Issues Committee from the Sierra Club’s Hawai`i Chapter, told Latinos Post. “We’re in the early rounds of the boxing match, and this is a twelve-rounder.”
According to the story in Latinos Post, the Sierra Club and a handful of other environmental and Native Hawaiian culture organizations assert the TMT will severely damage the area of the volcano, which Native Hawaiian traditions hold as sacred, a gateway to the afterlife that once only high chiefs and spiritual leaders were allowed to visit.
The story also states that at least one ancient burial site is confirmed on the mountain and that naturalists say it is “one of the last pristine environments in Hawai`i, let alone the world.” 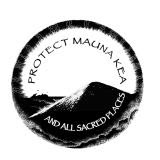 An entry on the Protect Mauna Kea page of Facebook page by Pua Case, one of the petitioners in the contested case for the construction permit, states, “The BLNR was not as strong as we had hoped they would be…. We would hope BLNR would defend our `Aina. But the truth is the bureaucracy that is BLNR can’t do it; we must do it; we must protect what we love. We cannot wait for the bureaucracy to (do) anything. We do it by standing for what we love, we do it by refusing to accept what is unacceptable, we do it by saying no to things that are a`ole pono.
“We must not be disheartened by this decision and must not lose hope — we must keep raising the standard of aloha for our `aina, the poe and the world.…
“We must also remember that when we began over 10 years ago, we were facing off with NASA — a giant entity. The TMT is no different, but what is more important to remember is that we did prevail. The UH and others have not been able to build any telescopes for over 10 years, so we must remember and not forget.”
In another entry, Case calls for opponents of the project to remain united:
“Mahalo to all who are posting in support of the mauna, our sacred and beloved Mauna A Wakea. Let us move forward as we have been directed to by the ancient ones … in love and light for the mountain and extend our highest and strongest heartfelt connection to her now more than ever.
“Pono will prevail, my friends, my relations. We will need you to stand with us for the mountain. We are all in this together. It is a significant time to be on this Earth to be a steward, a warrior, a protector in total consciousness. Stand strong as a mountain and fuel your fire with the light of our beloved Hawai`i from the mountain to the sea.”
The consortium developing TMT announced that construction is scheduled to begin next April, with site preparation taking place before the end of this year.

LIFE OF THE LAND HAS SUBMITTED questions to the state Consumer Advocate regarding the proposed contract being considered by the Public Utilities Commission for `Aina Koa Pono to grow feedstock and refine biofuel in Ka`u and sell it to Hawaiian Electric Co. and Hawai`i Electric Light Co.
In previous testimony, the Consumer Advocate stated, “I am informed, therefore, I believe, that the Edmund Olson Trust that owns the 12,000 acres of land on which the AKP project is to be located has made available portions of that land for food crop production, but very few farmers have actually taken advantage of that offer. Furthermore, if this project is approved, then the Olson Trust will make available a portion of the 12,000 acres for food crop production.”
Life of the Land asks several questions pertaining to this statement:

TOMORROW, KA`U RESIDENT DICK HERSHBERGER, dressed in period costume, portrays Hawaiian Volcano Observatory founder Thomas A. Jaggar during A Walk into the Past. The program takes place in the Whitney Vault, a 16’ x 12’ underground laboratory that still has original equipment and is located under a mound in front of Volcano House.
Performances are every other Tuesday at 10 a.m., 12 p.m. and 2 p.m. Participants meet at Kilauea Visitor Center. The program is free, and park entrance fees apply.

ENTRIES FOR TRIPLE C RECIPE CONTEST, an event of the Ka`u Coffee Festival, are due one week from today on Monday, April 22. The event featuring cookies, candies and crackers infused with a Ka`u Coffee flavor takes place Sunday, April 28 at 2 p.m. at Ka`u Coffee Mill. Professionals, Amateurs, and Students are welcome to submit a recipe for each category.
Entry forms are available at kaucoffeefest.com.

ALSO SEE KAUCALENDAR.COM AND FACEBOOK.COM/KAUCALENDAR.
Posted by The Ka`u Calendar at 3:46 PM