APPARENT JACKHAMMER WORK has destroyed a brackish water pool that is home to red opae - the Hawaiian shrimp - and a place where surfers wash off after riding the waves, according to County Council candidate Marie Burns.
Burns, an Ocean View resident, said she surfed Kahakahakea Beach on Monday and walked over to the brackish water crack “and to my utter horror was not able to find it... I walked all over and eventually found the remnants of the crack. There was altered a`a. I found the sides had been collapsed in. I could not access the water as before. I suspect a jack hammer did the job. There was a 30 – 40 foot compressor hose lying about,” she said. Burns, who chairs a Kahuku Native Forest Resource Committee as part of a new Ocean View community group, said she is organizing a hike to Kahakahakea this Sunday to investigate and document the damage. Burns said the water crack was “an intact ecosystem with red opae. A pristine untouched piece of heaven really.” The hiking group meets on Sunday at Malama Market at 8 a.m. She recommends bringing lots of water, good walking/hiking shoes, hat, sunglasses and lunch, along with “all documentation devices, ipod, camera, video camera.”


OPPOSITION TO ELIMINATING STATE INSPECTION of coffee for quality and origin includes Kona County Council member Brenda Ford, a candidate for  Council District 6 in Ka`u. Ford said yesterday that she and her husband, Larry Ford, commercially farm coffee, papaya and lychee and support place of origin guarantee for all crops. The bill to eliminate state inspection, which passed the 2012 legislature, is awaiting the signature of Gov. Neil Abercrombie. The Fords and other members of the Kona Coffee Farmers Association are asking for a veto.  The councilwoman said elimination of state inspections is largely backed by the “blenders” and big buyers rather than the small farmers. She said that just because there are so few state inspectors at this time, “it doesn’t mean you change the law.”
“Reducing inspection is not going to help us,” said Ford. “Georgia protects their peaches. You don't get 10 percent Georgia Peaches blended with 90 percent Guatemala peaches. Idaho protects its potatoes. You don’t get 10 percent Idaho Potatoes mixed with other potatoes.” She also pointed to wineries maintaining their regional integrity in California.
Regarding Kona, Ka`u and Hamakua coffee, Ford said, "You are dealing with a niche market, specialized coffee. You need protection and inspection to make sure that they are not blending secretly.”
Ford recommended funding more inspector positions, and implementing stiffer fines, $10,000, $15,000 and more to stop coffee farmers and brokers from selling Kona as Ka`u, Ka` u as Kona and from blending foreign coffee with Hawaiian coffee without obvious labeling.
The Kona Coffee Farmers Association has more than 300 members and lobbied at the legislature for a compromise bill. More on the petition asking for a veto of legislation to end state quality and origin inspection requirements can be seen at konacoffeefarmers.org.

SUPPORT FOR THE ELIMINATION OF STATE INSPECTION has come from Chris Manfredi, who lobbies on the issue as President of the Ka`u Farm Bureau with its 28 members. Manfredi, himself, manages the land where farmers grow their award winning Ka`u Coffee, and brokers Ka`u Coffee to buyers such as Starbucks. Manfredi wrote an op-ed published in the Honolulu Star Advertiser and local daily papers saying that lack of inspectors has caused delays of up to four weeks that “hurt the industry, crimping cash flows to farmers and producers alike, strangling commerce.”
“The certification process has become a restrictive bottleneck, damaging the industry it was intended to protect,” Manfredi wrote. He contended that the “ultimate arbiter of quality is the buyer.” He wrote that “Sophisticated buyers who pay the prices that Hawaiian coffees command typically request samples in advance. These samples are evaluated to a much higher standard than the Hawai`i Department of Agriculture’s standards.”
He also pointed to associations supporting the bill to end state certification, including the Hawai`i Coffee Association, Kona Coffee Council, Hawai`i Coffee Growers Association and the Maui Coffee Association. He noted that in addition to small family farmers, “large scale production is also found on plantations located on Maui Kaua`i, Moloka`i and O`ahu. Given this diverse spectrum of producers, it’s uncommon when such a broad array of stakeholders agrees upon any issue. This is one of those landmark occasions when growers and producers, large and small, government and law enforcement agree on a solution,” he contended.
The legislation also establishes a $10,000 fine and a felony conviction for fraudulently labeling coffee that could lead to five years in prison. 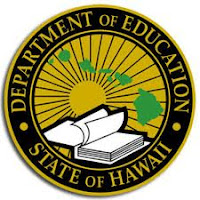 TEACHER INFORMATIONAL MEETINGS are being held around the state by the Hawai`i State Teachers Association in an effort to encourage educators to take another vote on the employment contract that they rejected earlier this year. Teachers are just two weeks away from wrapping up the school year and some are objecting to union negotiations during this time. The state is attempting to impose evaluations on teachers, tying them to student progress and testing scores. The union had negotiated an agreement that was voted down by teachers, but could be altered, according to Gov. Neil Abercrombie. Teachers can find out dates and times of their informational meetings by calling 329-5075, Extension 212.

THE KA`U COFFEE FESTIVAL HO`OLAULE`A is Saturday with free music and entertainment at the Pahala Community Center. Visitors are encouraged to come celebrate the success of Ka`u Coffee and talk-story with the esteemed growers. Local businesses, organizations and individuals will present information and sell food, coffee, and arts and crafts at booths during the festival. Coffee tastings will be available to guests indoors at the Ka`u Coffee Experience for $5 each from 9:30 a.m. to 3:30 p.m., with an hour break at noon. For $15 per person, visitors can tour local coffee farms and the Ka`u Coffee Mill and receive free entry to the Ka`u Coffee Experience. Free shuttles to the festival are available from Hilo Hattie; see kaucoffeefest.com or call 929-9550 for more.

SATURDAY WALK IN THE PARK, offered by Friends of Hawai`i Volcanoes National Park, happens this weekend from 11 a.m. to 1 p.m. Cheryl Gansecki leads the 4-mile hike exploring Kilauea Iki Crater. The guided hike is free to Friends members and non-members are welcome to join in order to attend. Park entrance fees apply. Call 985-7373 or email admin@fhvnp.org.

HAPA IN CONCERT is Saturday night, 7 p.m. to 9 p.m., at Kilauea Theater at Kilauea Military Camp in Hawai`i Volcanoes National Park. The concert, organized by Volcano Art Center, is a celebration of Lo`ea Hula honoring Charles Kauhi Ka`upu. Tickets are $35 per person and can be purchased at either Volcano Art Center locations or online at volcanoartcenter.org. Call 967-8222 or email concerts@volcanoartcenter.org for more.
Kilauea Military Camp’s Crater Rim Café hosts a special dinner before the concert, which is open to authorized patrons and sponsored guests. Park entrance fees apply.