REP. BOB HERKES will run for the new District Two state Senate seat that will cover Ka`u - from Punalu`u through Pahala, then into Volcano and all of Puna. The new District Two is the only new seat being added to the entire state Senate. It was established by the state Reapportionment Commission after the state Supreme Court ruled that the one-person, one-vote rule be followed after the 2010 census showed a 24.5 percent population growth on the Big Island. The first reapportionment scheme adopted by the commission was shot down by the court because it unfairly weighted the O`ahu population by including non-resident military, non-resident students and non-resident people incarcerated there.
Under the new apportionment scheme, in addition to Senate District Two, Ka`u will be served by Senate District Three, which will run from the uninhabited west side of Punalu`u through Na`alehu, Ocean View and up the coast to Kona International Airport. Sen. Josh Green, who now serves Kona but formerly lived in Ka`u and practiced medicine at Ka`u Hospital, said he will run again. Sen. Gil Kahele, who has been serving the Ka`u District since his appointment by Gov. Neil Abercrombie after Sen. Russell Kokubun stepped down to lead the state Department of Agriculture, will be eligible to run for the District One Senate seat in Hilo. Kahele said this morning he is “leaning that way,” to run for the Hilo seat. He said, however, “I won’t forget Ka`u. I enjoy working with the people of Volcano, Pahala and all the way to MiIoli`i. I will still push for restoring the irrigation system for the farmers and with helping the coffee industry and completing the new Ocean View potable water system.”
In the House of Representatives, with Herkes leaving his post to run for Senate, an opportunity will open for House District Three, serving Punalu`u, through Pahala, Volcano, Mountain View, Kurtistown and Kea`au, but excluding much of Puna and its coastal communities. Another open seat will be House District Five, from west of Punalu`u into North Kona.
A public hearing on this new reapportionment regime will be held this coming Tuesday at 6 p.m. in County Council chambers in Hilo with videoconferencing to the Council offices in Kona.

A FIRE AT THE OLD SUGAR MILL WAREHOUSE in Pahala was quickly extinguished yesterday by firefighters. The huge orange-colored building that was used for storing mill equipment parts has been abandoned and the scene of homeless camping and other fires since the mill shut down almost 16 years ago. According to the fire department, there was no damage to anything of any value. Some old abandoned papers were burned, said firefighters. 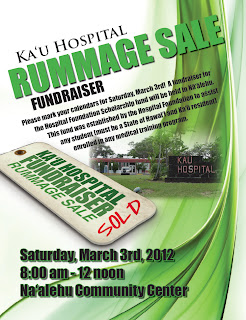 DONATIONS FOR A RUMMAGE SALE to benefit Ka`u Hospital Charitable Foundation’s scholarship fund, which assists any Ka`u student enrolled in any medical training program, are being accepted. Items can be dropped off at Kama`aina Kuts behind Na`alehu Ace Hardware through Saturday, Feb. 25. Call Ursula at 896-2624.

RIVER OF LIFE Assembly of God in Pahala hosts a free mini carnival tomorrow from 9 a.m. to 2 p.m. with games, music, prizes and food, while supplies last.

VISIT OUR SPONSORS: WWW.KAUCOFFEEMILL.COM AND WWW.PAHALAPLANTATIONCOTTAGES.COM
Posted by The Ka`u Calendar at 10:09 AM Links to this post