SUPPORT FOR KA`U SUGAR MILL PARK was presented to the county Public Access, Open Space and Natural Resource Preservation Commission on Monday. The 60-plus acres are up for auction on July 28, following foreclosure on owners who had planned to build a water bottling plant.
Testimony from Pahala resident Clyde Silva said, "This site of the former sugar factory, mill yard and old plantation camps offers this community and island a rare opportunity to remember and reflect on an era that is so rich in the history of our community and its people. A way of remembering where we came from, and who are are. It would serve as a way to teach the young generations and generations to come, of the history and culture of the area and the state of Hawai`i, which is offered nowhere else on this island."

"The park could also provide for recreation and community events and camping," recommended Silva.
Other testimony included support to preserve the old KAHU radio station building, which is now the location for Hawai`i Public Radio broadcasting into Ka`u. The radio station building from the early 1900s was Hilo Bank, then Bank of Hawai`i, a dentist office, pool hall, economic development classroom and radio station. It features a mural of plantation days and the old sugar camps where the grandparents and great grandparents of many Pahala residents lived as immigrants to Hawai`i.
The building supports Civil Defense through emergency radio transmissions. Civil Defense funds were used to establish the station since Ka`u was otherwise without emergency broadcasting. It was also a community radio station where the late Bobby Gomes and other hosts invited keiki to play music on the air.
Kamuela resident Lynn Fraguen who visits Ka`u, wrote the commissioners: "The old mill and Ka`u residents have been a highly ignored part of the history of our state. Respect for this part of our history needs to be preserved and honored in such a way that both look back and look forward."
Pahala residents Gabriel and Cheryl Cuevas sent in a number of ideas for the land, including: camping area for guest visitors
with historical info on area, including how residents overcame losing their main employer - the sugar mill - to become successful coffee growers and how they built a coffee industry where there was none; a skate park and possibly small dirt bike course; amphitheater for arts and entertainment, including local musicians and hula halau; small studio type shops for commercial use on a small scale; a visitor info center focusing on Ka`u.

They also suggested development of an outdoor venue for such events as vintage car and motorcycle shows. They said the old mill site could be  a "Place to gather outside of the busier towns," a place for recreation in a more relaxed rural area.
They wrote that "small shops or small business incubators could be developed," and the mill site could provide a place for such enterprises as car repair, solar energy, contracting and other small businesses.  A trade school could be located on the land.
The suggestion for the site becoming a park, presented to the commission by Dorothy Silva, of Pahala, also mentioned the spring as a possible back up water source for the community.
Should there be a willing seller of the property the Open Space Commission members will likely visit the property as it plans to prioritize suggestions for acquisitions of property around the island.

GOV. DAVID IGE VETOED THE TINY HOUSE AND AQUARIUM COLLECTION BILLS ON Tuesday along with 11 more bills on his veto list.
Two of the bills on his veto list, he signed into law. HB 523, Relating to Recycling, allows the state Department of Accounting and General Services to set up recycling at properties it manages. HB 575 Relating to Public Lands allows the state to extend leases of commercial, hotel, resort and industrial state owned properties when lessees make substantial improvements. This was supported by the Hawai`i County administration and County Council along with SB1184, which establishes a Redevelopment District and Fund for Hilo waterfront and HB 1469 which sets procedures for other redevelopment districts.
VETO OF TINY HOUSE BILL: Explaining his veto of HB 2, the governor said that it would have authorized the placement of “tiny homes” of 500 square feet or less of living space within the state agriculture district of Hawai‘i County. These “tiny homes” would have been used by farm workers or their immediate families on land currently being used for agricultural production.
According to the rationale of the governor, "Hawai‘i County Zoning Code (HCC Chapter 25) already allows for a farm dwelling as a permitted use of agricultural-zoned lands. By Zoning Code definition, a farm dwelling means a single-family dwelling located on or used in connection with a farm, or if the agricultural activity provides income to the family occupying the dwelling."
The governor's office reports that in 2015 and 2016, a total of 27 additional farm dwellings were approved by the County of Hawai‘i Planning Department. During that period, all applications for farm dwellings were granted. "The administration is committed to working with Mayor Harry Kim and the County of Hawai‘i on addressing the affordable housing issue for farm workers on Hawai‘i Island," says the statement from the governor's office.
VETO OF FISH COLLECTION BILL: Explaining his veto of SB 1240 , Relating to Aquatic Life, the governor explained that the bill would have required the Department of Land and Natural Resources to define “sustainable” and establish a policy for sustainable collection practices through take limits. It also would have prohibited the DLNR from issuing new aquarium fish permits to use fine meshed traps or fine meshed nets and prohibits the transfer of permits after five years.
A statement from the governor said that "Since the release of the Intent to Veto List on June 26, this issue has been highlighted across numerous local and national media outlets. The Office of the Governor has received thousands of phone calls and emails from constituents expressing their support for and opposition to this bill. The one thing everyone can agree on is that one of Hawai‘i’s most valuable resources, the coral reef, must be protected. The Department of Land and Natural Resources and Gov. Ige agree that sustainable policies and practices are needed. The governor has no objection to the first part of the bill that requires the DLNR to define 'sustainable' and establish policies for sustainable collection."

According to the governor, the DLNR is committed to "working with all stakeholders to come up with a better solution. Discussions have begun on 'limited entry' aquarium fisheries, expanding Fishery Replenishment Areas (FRAs) to O‘ahu, capping permit numbers, addressing catch limits, and establishing permit fees." Gov. Ige is committed to introducing legislation and/or administrative rules that will "properly address all concerns, and create policy that will establish Hawai‘i as the best managed sustainable nearshore fishery in the world," the statement says. 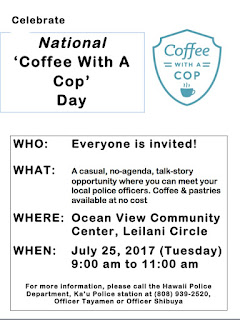 "Regarding this measure, the governor has concerns that the science does not support the claims made in this bill. In West Hawai‘i, where approximately 80 percent of Hawai‘i’s aquarium catch comes from, FRAs were established to reverse the decline in fish populations. The Division of Aquatic Resources and the DLNR have collected data over 17 years and completed more than 6,700 surveys in this area, and have found that aquarium fish populations are generally stable or increasing. Based on the extensive scientific data from West Hawai‘i, it would be premature to phase out aquarium collecting permits," the governor's statement concludes.
"Furthermore, it must be understood that this bill does not prohibit fish collecting. It simply prohibits the issuance of new permits to use small meshed nets and traps. The meshed nets and traps are an important tool for aquarium fish collectors. There is hope that this will eventually phase out the industry. This would take decades as currently proposed. The worldwide demand for aquarium species could lead to new and more destructive ways of collection," sates Ige.

Posted by The Ka`u Calendar at 10:24 PM Links to this post