INCREDIBLE VISTAS FROM HIGHWAY 11 of land visited by campers, fishermen and opihi pickers, and preservation of archaeological sites and natural resources are reasons listed in the campaign to preserve Kaunamano, the 1,363-acres up for nomination before the county Public Access, Open Space and Natural Resources Preservation Commission. The proposal from Ka `Ohana O Honu`apo says another purpose would be for public outdoor recreation and education, including access to beaches.

A petition for support is being circulated by Ka `Ohana O Honu`apo. Call executive director Lehua Lopez-Mau at 929-9891.

The property extends from the pasture below Honu`apo Lookout on Hwy 11 to the ocean and four miles down the coast. Several plans have been made to subdivide the slope below the lookout into 20-acre agricultural lots to build houses that would give buyers views of Honu`apo and the Ka`u Coast all the way to Hawai`i Volcanoes National Park. The houses would be built on what is now in pasture and in the view plane of the lookout. However, the owner, pending purchase for the preserve, has taken the property off the market.

The lookout, one of only two in Ka`u, offers the view of the pasture that drops off to the ocean, as well as Hawaiian fishponds, estuaries and the more than 300 acres already preserved between Hwy 11 and the ocean, from Whittington Pier to the lava flow, and another 800 acres from Kawa toward Punalu`u.
The proposal to the commission says Kaunamano shoreline is used by fishermen from both Ka`u and other districts and islands who camp, fish and pick opihi. “Besides shell-fish resources used for subsistence, other marine resources prized by local fishermen for their recreational as well as subsistence use include fish species like ulua and moi. Native plant species `akuikuli (sea purslane) and beach `ilima can also be found at the shoreline. Protection of the marine and shoreline natural resources are necessary to provide these resources to future generations as marine resources in other areas of Hawai`i Island become ‘fished out..’” the proposal says.
“Because of the 4-wheel drive access and the continued use of the coastline by Ka`u residents, educational opportunities to instruct local students (and their families) in ancient and modern methods of sustainable fishing and shell-fish picking using values of kuleana (responsibility) and malama (taking care) would greatly increase the motivation and ability of future residents to preserve and protect the natural resources in this area.”
The proposal mentions the Hwy 11 pull-out and overlook for visitors as having “incredible ocean vistas. This same overlook and area attracts dozens of kite-flyers from around the island almost every weekend of the year for recreational purposes.”
“Because there are no trees on this land, the huge, open vistas from the top of the property down to the shoreline allow ocean views almost unparalleled from any other site in Ka`u. Kaunamano’s natural beauty is so vast that the tourist overlook at one end of the property above Honu`apo Bay, attracts scores of visitors, year-round, to park and enjoy the views that extend from Punalu`u on the north to near the south end of Kaunamano,” the nomination papers say.
In the nominating papers, Ka `Ohana O Honu`apo notes that it sponsors Keiki and `Opio Workshops at the adjacent Honu`apo Park “teaching these same values and methods to local island children (from Ka`u and other areas of Hawai`i Island) about the marine, historical, and cultural resources of the Honu`apo area. Ka `Ohana would be pleased to expand its educational workshops to include both the mile of coastline resources now protected as a county park and these adjacent four miles of shoreline assets.”
An archaeological survey of the property in 2004 reported 444 sites with more than 3,900 features, including enclosures, mounds, platforms, walls, alt pans, walled terraces, trails, petroglyphs, papamu, heiau, a refuge cave and other lava tubes, ceremonial sites and burial sites.

THE DEPARTMENT OF HAWAIIAN HOME LANDS  will hold a community meeting at Pahala Community Center at 6:30 p.m. on Monday, Sept. 17. The meeting involves the regional plan for Ka`u and organizers ask for input for the community. Hawaiian Home Lands staff and all the commissioners from around the islands are expected to attend. 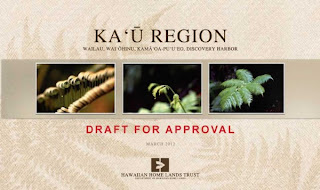 The Ka`u Hawaiian Home Lands association urges everyone to attend. The commissioners for the island of Hawai`i are Leimana Dematte and Ian Leiloy. The President of the Ka`u Hawaiian Home Lands Association is Jeff Kekoa. Vice President is Liz Kuluwaimaka, Secretary is Darlyne Vierra and Treasurer is Stephanie Tabada. The Ka`u Regional Plan can be read at hawaiianhomelands.org.

THE PUBLIC IS INVITED TO MEET with Department of Water Supply representatives tomorrow at 5:30 p.m. at Ocean View Community Center to discuss Ocean View’s well and distribution of water. According to DWS, the meeting is in response to “increased reports of incorrect information in the community.” A report with answers to frequently asked questions is available online at hawaii.dws.org.