`AINA KOA PONO public relations representative Barbara Hastings responded to questions this morning about the plan to bring from the mainland a 33-ton-per-day microwave depolymerization test unit to make diesel from biomass. `Aina Koa Pono was asked to confirm that the proposed refinery test site would be located in Ka`u off Wood Valley Road. `Aina Koa Pono was also asked the following:
From where would the feedstock come? Is the 33 tons that would be needed per day comprised of the dry pellets or the wet feedstock? Would the feedstock be made into pellets at the test site? What kind of infrastructure would be needed for the test plant? Mill yard to store the biomass? Pellet making plant? Cooling tower? Electricity upgrades to accommodate the test plant?
How much existing feedstock can be retrieved for the test plant – i.e. trees, brush, grasses that are on the land and would AKP be clearing these for the test unit? Would AKP be replanting as AKP clears the land?
The response from the PR firm was: “For the present, we are issuing periodic eNews, which is what you received. As AKP has information to share, that will be our vehicle for the time being.”
Here is the complete eNews release: 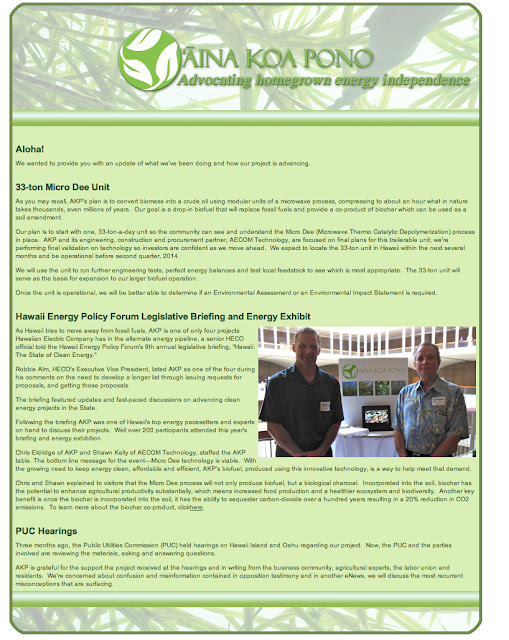 FESTIVAL GROUP CAMPING AT KAMILO drew the concern of a number of community members including a group that regularly volunteers with Hawai`i Wildlife Fund. According to Megan Lamson, who organizes regular community cleanup days, a small group of people visited Kamilo on Friday, Jan. 18 and found that there were about 100 people and more arriving for a Rainbow Festival scheduled for Jan. 16 through Jan. 28.
The invitation can be seen at www.welcomehomehawaii.com. Lamson said her group passed out some 50 letters to people who had already arrived, explaining to them the problems with such a large group camping there without permits and without necessary health facilities. Some volunteers also stationed themselves at Ka`alu`alu Bay turnoff from South Point Road to encourage people to change their minds about participating in the 12-day campout.
“While we weren’t outright successful in our mission to dissuade the group (they weren’t leaving in flocks), some of them were willing to listen to us and take our letters. We definitely started a discussion,” said Lamson. She said that one of the “elders” associated with the event who lives on Hawai`i Island, “unlike 75 percent of them who have flown in just for this event,” said they would not likely come back next year.
The volunteer Ka`u group took down license plate numbers to report them to the state Department of Land & Natural Resources, which is responsible for permitting and permissions for camping and other uses of the public coastal resources. Lamson reported that large containers of water were being filled at the Wai`ohinu spigots for the group’s use. She also said it appeared that many of the people hitchhiked from the Kona or Hilo airports and hiked in from South Point Road. She said that the organizers of the event dug holes three to four feet deep for the luas and used bleach for sanitation.
She said that any such use of the coast that draws a large crowd requires a permit from the DLNR.
The letter distributed to the campers says in part, “We know you do not intentionally mean to harm the environment and your goal to ‘be one with the earth’ is an admirable one. However, the truth of the matter is that you are damaging an area that is rich in natural and cultural resources - which puts you at odds with the earth, rather than at one with it.
“It is impossible for you to gather here in such a number without causing serious problems for the ecosystem. Some examples from your past Rainbow Gatherings at Kamilo include: tramping of native plants (by parking/camping on them); killing of native plants (by cutting new trails into the coastal strand vegetation for campsites and lighting fires that threaten the entire shoreline ecosystem); having large groups of people leave their urine and fecal matter along the coastline; creating a human health hazard and increasing the spread of toxic diseases; feeding the non-native populations of feral cats, mongoose and rats (with food scraps & waste).”

HAWAI`I VOLCANOES NATIONAL PARK law enforcement ranger Nainoa Keana`aina, who has served Hawai`i Volcanoes National Park since 2007, is the first-ever recipient of the Honor Graduate Award from the National Search and Rescue Academy. The intensive six-week program was conducted at Marine Corps Mountain Warfare Training Center near Bridgeport, CA in the Sierra Nevada Mountains. The training provides participants with essential field rescue skills in ground search operations, incident command systems, swiftwater rescue, technical rope rescue, helicopter rescue techniques, remote emergency medical responder training and more.
Keana`aina served as class president and incident commander and was selected by his fellow classmates for the Honor Graduate Award.
“Nainoa exemplified personal leadership skills and a commitment to learning during the intensive six-week academy,” said NARSA coordinator Ken Phillips. “He is the sort of professional responder that a search and rescue coordinator desires to have on an SAR team.”
The physically demanding NSARA training was conducted by the National Park Service in conjunction with the Department of Defense. To broaden inter-agency cooperation, allied and federal agency personnel jointly attended the academy.

KILAUEA DRAMA & ENTERTAINMENT NETWORK’S A Walk into the Past is again being performed in Hawai`i Volcanoes National Park. The living history program features Ka`u resident Dick Hershberger, dressed in period costume, who brings back to life Dr. Thomas A. Jaggar, founder of Hawaiian Volcano Observatory and a prominent figure in the history of the study of volcanoes.
Hershberger has performed with Aloha Performing Arts Company, Waimea Community Theater, The Palace and University of Hawai`i-Hilo and KDEN. “When first approached to undertake the Living History Presentation of Thomas A. Jaggar, I was initially intimidated by the enormity of the task,” Hershberger said. “Playing Jaggar in front of a live audience three times a day is daunting enough without the additional work of playing this real life character without a script.
“The more that I explored Dr. Jaggar’s life, the closer I have become one with him,” said Hershberger. “He was originally from Pennsylvania; me, too. His father was a clergyman; mine, also. His family traveled extensively in Europe, and another similarity, he resided in Naples, Italy for a time. It’s about this point where the similarities in our lives began to creep me out a bit.”
The program was conceived by local actor-director-playwright Peter Charlot, who portrayed Jaggar for the first seven years. Alongside Charlot, local storyteller Sandra MacLees played his assistant (and eventually Jaggar’s wife) Isabel Maydwell. That program came to a conclusion in May 2012, due in part to construction at Volcano House.
Set in 1912, A Walk into the Past takes place in the Whitney Vault, a 16’ x 12’ underground laboratory that still has original seismograph equipment and is located under a mound in front of Volcano House. Free performances are held Feb. 5 and 19 and every other Tuesday at 10 a.m., 12 p.m. and 2 p.m. Meet at Kilauea Visitor Center. Park entrance fees apply. 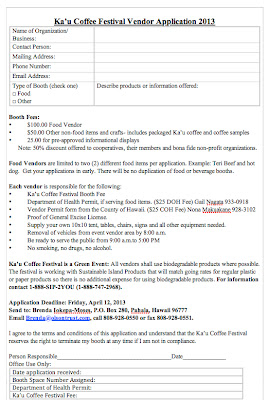 KA`U COFFEE FESTIVAL COMMITTEE invites vendors to apply for food, arts, coffee and educational booths for the annual ho`olaule`a to be held Saturday, May 5 at Pahala Community Center. Food booths are first-come, first-served, as the festival will present only one booth of each type of food. Fees are $100 per food vendor; $50 for non-food vendors including arts, crafts and packaged Ka`u Coffee and coffee samples. The fee is $25 for pre-approved informational displays.
In all categories, there is a 50 percent discount for cooperatives, their members and bona fide nonprofit booths.
Vendors are responsible for Department of Health permits if serving food items, vendor permits from the county and proof of general excise tax license and must supply a 10’X10’-foot tent and any needed tables, chairs, signage and other equipment.
The Ka`u Coffee Festival is a green event, and vendors are required to use biodegradable products where possible. Application deadline is Friday, April 12. See more at www.kaucoffeefest.com.

KILAUEA’S VOLCANIC GASES and Their Environmental Impact is the topic at Pahala Community Center Wednesday at 6:30 p.m. when USGS Hawaiian Volcano Observatory geochemists Jeff Sutton and Tamar Elias explain how vog forms and what has been learned about its effects on our island environment. This is HVO’s second program in Pahala, and they hope to have more in the area depending on interest from the local communities.

Posted by The Ka`u Calendar at 11:27 AM Links to this post