`AINA KOA PONO PARTNER CHRIS ELDRIDGE released an opinion piece today to the media headlined `Aina Koa Pono Outlines Benefits to Ka`u. Eldridge is a partner and on the management team of `Aina Koa Pono. He has 20 years of entrepreneurial and start-up experience, founding four companies including America’s Mattress and PortaBox Storage. Eldridge serves on the Board of Kapi`olani Medical Center for Women and Children and is a member of The Nature Conservancy of Hawai`i’s Corporate Council for the Environment, the press release notes.

Edridge writes that the `Aina Koa Pono refinery, which is planned near Wood Valley Road above Pahala, “will fuel 18 percent of Hawai`i Island’s electricity needs and produce a transportation fuel."
Eldridge says, “AKP’s biofuels project will bring hundreds of jobs to Hawai`i County, replace imported fossil fuel-based diesel at the Keahole power plant, and add eight million gallons of transportation biodiesel a year. Eldridge contends, “Importantly, it will not impede other renewable energy projects.”
He states that, with `Aina Koa Pono on board, “Hawai`i’s reputation as a renewable energy incubator will be enhanced by the cutting-edge technology AKP has licensed. The microwave catalytic depolymerization (Micro Dee) takes biomass (in the case of the Ka`u facility, locally grown feedstock) and accelerates the natural process of converting it to oil to just over an hour.”
Eldridge promises that “the technology is safe and is not new—it’s been used in herbal extractions and pharmaceuticals for years. Using higher temperatures and a catalyst, it produces a biofuel. The 900-ton-a-day operation will be modular—each microwave handling 33 tons. Once the first unit is tested and accepted, it will be set it up at Ka`u so it can run in place and give the community the opportunity to see its operation.”
Eldridge writes that “the acreage AKP has leased for crop production will enhance the island’s agriculture industry. A first step will be to clear invasive species and use them as feedstock.”
He makes a promise that “building `Aina Koa Pono’s project will employ 400 and increase badly needed construction jobs by 13 percent on Hawai‘i Island. These jobs have been cut in half to 3,000 since 2007, economist Leroy Laney, PhD reported in August for First Hawaiian Bank.
“When the facility is operational, there will be 200 permanent jobs, positively impacting Hawai`i Island’s 8.8 percent unemployment rate, which in May was 2.5 points higher than the state’s average (6.3 percent).
“AKP will generate nearly $200 million in general excise and payroll taxes over 22 years, compared to $2.2 million if the same fuel is imported,” Eldridge writes. He says the economy will be further helped: “Dollars paid for services and salaries will re-circulate— buying groceries and school supplies instead of being sent to foreign oil producers. Once operating, AKP will contribute $250,000 a year to Hawai`i Island in community benefits focused on education and the environment. An immediate contribution will help fund preservation of books at the Pahala library.
“Other renewable energy projects won’t be affected by AKP, which will replace imported fossil fuel at Hawai`i Electric Light Company’s Keahole power plant. It is fact, not opinion, that liquid fuel will be needed at Keahole for many years to come," states Edlridge.
Eldridge reports that “estimates are that additional geothermal power would take seven to 10 years to develop, as HELCO gears up to issue a request for proposals, probably next year.
“In the meantime, AKP will supply virtually 100 percent of Keahole’s needs with 16 million gallons of biodiesel a year. Should the utility no longer need it at Keahole, it can transport the fuel to another plant, including on O`ahu or use it for transportation.
“The private investors who will put up approximately $450 million for the project assume the risk—not the utility.
“The eight million gallons of biofuel produced annually will be distributed by Mansfield Oil Company, with preference to Hawai`i. If sold here it would represent 16 percent of Hawai`i’s transportation diesel demand based on the 2011 data of the Federal Highway Administration,” Eldridge predicts, saying, “Mansfield is an industry leader in fuel handling and distribution and will handle all the fuel logistics from the Ka`u facility.”
Eldridge defends the proposed rate hikes that HELCO and `Aina Koa Pono are proposing to the Public Utilities Commission. “Yes, there is a cost— electric bills will be higher for a while—a dollar or less for a typical monthly 500 to 600 KWH user. That would change as the price of fossil climbs beyond the biodiesel. We cannot say how long that will be; we can say that since 2009 oil has trended upward, from about $40 to more than $116 a barrel. With worldwide demand growing and supplies at risk, it is likely that trend will continue.”
He defends HELCO and `Aina Koa Pono fixing the diesel price from the proposed refinery for 20 years: “AKP’s 20-year fixed-price contract with HELCO makes the cost of energy more stable and predictable. Sudden increases in oil prices will have less budgetary and economic impacts on business and government.”
Eldridge invites the public to “investigate www.ainakoapono.com to learn more about `Aina Koa Pono. Contact us through the site if you have questions, which we will try our best to answer. We believe AKP is a win/win/win for Hawai`i — jobs, sustainability and community benefits.”
The contract between HELCO and `Aina Koa Pono, along with other related documents and public testimony, is available online at puc.hawaii.gov/dockets. Docket number is 2012-0185. 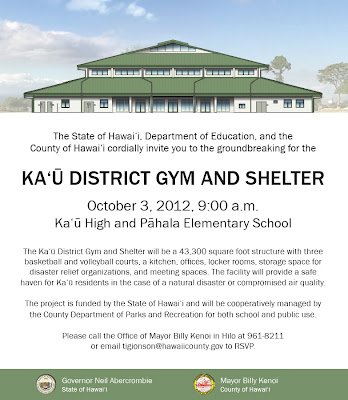 AN INVITATION TO THE KA`U DISTRICT GYM and Shelter groundbreaking was issued by the State of Hawai`i Department of Education and the County of Hawai`i today. It says the Ka`u District Gym and Shelter will be a 43,000-square-foot structure with three basketball and volleyball courts, a kitchen, offices, locker rooms, storage space for disaster relief organizations and meeting spaces. “The facility will provide a safe haven for Ka`u residents in the case of a natural disaster or compromised air quality,” says a flyer for the event. The project is funded by the state of Hawai`i and will be cooperatively managed by the County Department of Parks and Recreation for both school and public use. For more information and to RSVP, call the Office of Mayor Billy Kenoi in Hilo at 961-8211 or email tigionson@hawaii.gov.us.

RESIDENTS INTERESTED IN JOINING the newly incorporated Ha`ao Springs & Mountain House Ag Water Co-op are encouraged to attend the meeting tomorrow at 2:30 p.m. at Wai`ohinu Park. The co-op is looking for members to help survey and GPS the proposed water line route, organize a membership outreach meeting at Na`alehu Community Center and begin research and exploration of water use rules. For more information, contact Alison Yahna at beeoracle@hotmail.com.

ARTISTS ARE INVITED TO ENTER Ka`u Chamber of Commerce’s art show and Directory 2013 art contest. Entries are accepted Friday from noon until 5 p.m. and Saturday from 9 a.m. to 11:30 a.m. at CU Hawai`i credit union in Na`alehu.
Categories are Graphic, Sculpture, Wood, Photography and Craft, and all pieces must have been completed in the last 12 months. The fee is $5 for each artwork.
A Keiki Division is for children in grades one through six, one entry per keiki. Keiki categories are Graphics and Photography, no larger than 8.5 by 11 inches, including frames, if any. The entry fee is $1, and these entries are not eligible for the cover of The Directory 2013. Only the first 60 Keiki exhibits will be accepted.

ALSO SEE KAUCALENDAR.COM AND FACEBOOK.COM/KAUCALENDAR.
Posted by The Ka`u Calendar at 5:01 PM Links to this post