THE NEW KA`U DISASTER SHELTER AND GYMNASIUM has an architectural and design firm, chosen by the county. Mitsunaga & Associates representatives from O`ahu joined county officials in Pahala last night to gather public input on design and function.
County Public Works chief Warren Lee said his agency, the county Department of Parks & Recreation, and consultants from Mitsunaga will take into consideration community desires. He also said the goal is to use the national Leadership in Energy and Environmental Design green building standards. He said they plan to design a topnotch gymnasium and community recreation center and shelter to fit in with the architecture of the town and campus as much as possible. Public input is being taken through Dec. 6 and can be provided by writing to project manager David Yamamoto at dpwnews@co.hawaii.hi or mailing to Department of Public Works, 101 Pauahi Street, Suite 7, Hilo, HI 96720. Notes from last night’s meeting are on the Department of Public Works link at www.co.hawaii.hi.us.

A draft plan is expected in December, an Environmental Assessment will be conducted and the bids could go out for construction by March.
Concerning design of the building, Aaron Fujii, chief operating officer of Mitsunaga, said, “We will try to make it match the community, but it is going to have to be a hardened building,” referring to the likelihood that it will be concrete to provide protection from hurricanes and to make it as earthquake-proof as possible.
He said Mitsunaga is sensitive to neighborhood concerns and talked about setbacks from houses, designing the building to prevent noise from bothering neighbors, and designing parking lots where lighting could be screened from shining into bedroom windows of adjacent homes and from disturbing night skies in Ka`u, which are famous for stargazing.
Fujii said the roofline is yet to be designed.
Volleyball coach and former County Council member Guy Enriques said that he hopes the gym floor will be wood rather than concrete or another material. He said he wants the focus of design to be the needs of the youth of Ka`u.
Lee said the building will be designed for the school and also for the entire community, including recreation for older people, as it will be operated as a county parks facility.
Pahala resident Dorothy Kalua, a member of the Plantation Days Committee, said she hopes for the building “to fit in with the community.”

Retired sugar union leader Franco Longakit talked about designing the shelter aspect for as many people as possible and said “we can’t turn away people from Na`alehu,” should they show up during a disaster.
While the shelter in Pahala will be for everyone, the distances in Ka`u are far, and the county is also working on a shelter for Ocean View, said park planner James Komatsu. It was also discussed that classrooms on the Pahala campus could provide additional space for the shelter.
Concerning construction, Jay Failing, of Wood Valley, urged that the county and contractor hire skilled local workers to help build the gym. Fujii said there are incentives to hire local when building with state money.
Vog was discussed, and Lee said that the cost of electricity would probably make it too expensive to operate a gym that would be air-treated and air-conditioned at all times. Fujii talked about the Maryknoll gym on O`ahu costing $24,000 a month to air-condition. The new Ka`u gym will have natural air circulation but could be sealed during an air alert.
A large room where sensitive people could gather during alerts could have equipment to treat air for vog, planners said.
A certified kitchen, available to community groups to make food for fundraisers, was also suggested, along with a stage for community events, a state-of-the-art fitness center and a gym floor large enough for one regulation basketball court and three volleyball courts. The gym could be a regulation gym, a “gym and a half” or a “two-times gym,” designers said.
Gary Domondon noted that the 2000 flood created a torrent coming from the school grounds where the gym is planned onto his and other residential properties. While improvements have been made, Domondon suggested that engineers look closely at the land there, particularly since it is likely that it will be paved for parking, and pavement does not absorb water the way earth does. Project designers said they appreciated the local knowledge.
Fujii said the Mitsunaga company has worked with residents of Manoa on O`ahu to meet design and recreational needs for the new Manoa Valley District Park Field House. Among its many buildings, Mitsunaga has designed the Maryknoll school gym on O`ahu, the Kihei Police Department on Maui, and Chiefess Kamakahelei Middle School on Kaua`i, which can be seen on the company’s website at www.mitsunagaassociates.com.
After the November 2000 disastrous flood that took out Hwy 11 bridges around Pahala, Mitsunaga designed the new Makakupu Bridge crossing the ford on the Volcano side of town. Mitsunaga is also designing and engineering renovations at Ka`u Hospital.
The public works chief said that he expects the project to be “on time and on budget” and urged community ideas to be provided now, as there will be little chance for more money flowing into Ka`u for additions once the project is completed.

OPEN SPACE MAINTENANCE FUNDING moved closer to being sent to the voters for approval yesterday as the County Council’s Finance Committee voted 6-2 to send Brenda Ford’s bill to the full council.
The Public Access, Open Space and Natural Resources Preservation Maintenance Fund would acquire about $500,000 from .25 percent of property tax revenues collected by the county. The money could be used for research, stewardship, maintenance and some improvements like fencing, but not for construction of visitor centers or other capital improvements, Ford said. It would be reserved for lands acquired by the county using its open space funding. In Ka`u, that land includes thousands of acres at Kawa, Honu`apo and Road to the Sea.
Community groups, such as Ka `Ohana O Honu`apo, could apply for grants for programs related to the land that has been protected.
Any time the fund would exceed $3 million, the excess would be given back to the Open Space Land Fund.
Council members Donald Ikeda and Dennis Onishi voted against the measure during yesterday’s council meeting, and Pete Hoffmann was away.

HAWAIIAN AIRLINES has announced daily flights from JFK airport on Long Island, New York to Honolulu. The introductory flight discount rate will be $212 one-way. Hawaiian Airlines Five-O flight will depart Honolulu at 3 p.m. in the afternoon and arrive the next morning. Hawaiian Flight 51 will leave New York early in the morning and reach Honolulu in the afternoon, in time for Neighbor Island connections. Both flights will be daily. The new Hawaiian Airlines flight will compete with Continental’s direct flight from Newark Airport in New Jersey. 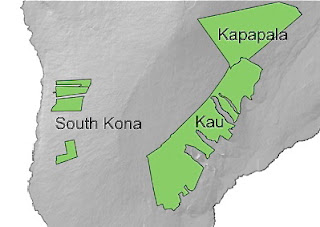 THE KA`U FOREST RESERVE is the topic at this Friday’s Ka`u Chamber of Commerce meeting at 3:30 p.m. at Punalu`u Bake Shop. Ron Terry, of Geometricians Associates, which is conducting an Environmental Assessment for the state Department of Land and Natural Resources management plan, discusses access for hunters and hikers, ridding the forest of ungulates and invasive plants, and re-introducing `alala, endangered Hawaiian crows, which have been raised in captivity.

TWO CHURCH BAZAARS are set for Saturday. St. Jude’s Episcopal Church in Ocean View holds its annual holiday bazaar and plant sale from 8 a.m. to 1 p.m. Items include soup and bread, homemade baked goods, jams, jellies, candies, plants and crafts. Kauaha`ao Congregational Church in Wai`ohinu has a fundraising bazaar from 9 a.m. to 1 p.m. with a flea market, food and entertainment

KA`U `OHANA DAY TAKES PLACE Saturday at Na`alehu Park from 10:30 a.m. to 2:30 p.m. Competition in free Makahiki games is open to children in grades 6 to 12, but the entire `ohana is welcome. The event was initiated by Hawai`i Volcanoes National Park and involves many community organizations. Pre-registration is required; call 985-6019.
Posted by The Ka`u Calendar at 10:55 AM Links to this post