THE NEW KA`U DISTRICT GYM AND SHELTER plans have been released to the public in a Draft Environmental Assessment. The complex is expected to cost more than $17 million.
Copies of the document have been mailed to community members who requested them along with community associations and some people living near the site. They should also be available at Na`alehu and Pahala Public Libraries. The EA also is posted for review on the state Department of Health’s Office of Environmental Quality Control website. The public has a month to comment.
The Draft EA shows cinder block buildings, with plantation style rooflines, constructed on the open grassy field next to Ka`u High School between the tennis court and the current gym and surrounded by parking lots that could be paved, partially paved, or remain grassy. 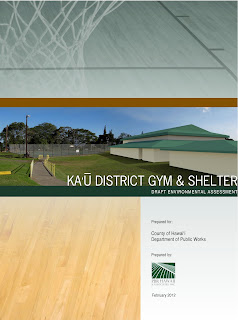 “The Ka`u District Gym & Shelter will be noticeable from Kamani Street and will change the visual character of the Site from an open grass field to a landscaped parking lot and approximately 40,000 square feet building. However, the structure will be visibly compatible with the adjacent historic school buildings with the proposed plantation-style roofline and complementary paint color. The placement and height of the building will not obstruct any view planes toward the pu`u nor obstruct any existing views of the ocean,” the EA says. It does note, however, that the project building “at about 48 feet will exceed the zoning height limit of 35 feet. The tallest existing school building is approximately 40 feet. A height variance is being sought,” the EA states.
The buildings would be made of cement to harden them against hurricanes and for sheltering people during and after natural disasters. At least one 2,000 square-foot-room, which could shelter 120 people during a short-term hurricane or air quality emergency, would be equipped to clean the air from vog. However, the main gym, with the ability to shelter 1,500 people for a short-term disaster and 560 people for temporary housing after a disaster, would be without the air cleaning equipment, according to the proposal. The EA states that Civil Defense is comfortable with providing clean air for 120 people.
Public Works director Warren Lee wrote to the Office of Environmental Quality Control saying that his agency reviewed the Draft EA and anticipates a Finding of No Significant Impact.
See more at http://oeqc.doh.hawaii.gov/Shared%20Documents/Environmental_Notice/current_issue.pdf.
PAHALA LIBRARY REOPENS TODAY after being closed for a month with hours Monday, Thursday and Friday from 11 a.m. to 4 p.m. The library is closed on Tuesday, Wednesday, Saturday, Sunday and all state holidays. It is recommended that patrons call before going there since there have been staff shortages that can sometimes close it down. Call 928-2015.
AN EARTHQUAKE SWARM continued this morning at the place where Kilauea and Mauna Loa Volcanoes meet. The location is close to the border of Ka`u and Puna, about three miles west of Kilauea Crater. It is near the epicenter of the Kaoiki Earthquake that severely rocked Kapapala and Pahala. That 6.6 temblor, on the morning of Nov. 16, 1983, knocked the top off the chimney at the old Ka`u Hospital doctor’s residence and inflicted more than $7 million in damages from Ka`u to Hilo. The smaller earthquakes, yesterday and today, numbering more than 60, were no larger than a 3.2 magnitude and were mostly small, including one at 4:19 this morning at 1.9 magnitude - unfelt by most people in Ka`u.
Stronger swarms of earthquakes happened at the same place in 1993, 1997, 2000 and 2006, according to Janet Babb, of the U.S. Geological Survey’s Hawaiian Volcano Observatory. “It’s a site of episodic seismicity,” she said. The Kaoiki fault system relates to the subsidence of the southeast flank of Mauna Loa.
LA `ELIMA, hosted by Hauoli Kamana`o Church, will be held at Miloli`i Village Park Pavilion this Saturday from 11 a.m. to 3 p.m. The church asks the public to talk story and enjoy live music, fire dancing and lu`au-style food. Walter Kahiwa, Jr., will give a detailed history of La `Elima. The gathering is in memory of events following a 7.0 earthquake in 1868 that took other fishing villages such as Kalapana underwater but spared Milloli`i. Miloli`i people took in the survivors from subsided villages and held a traditional gathering each year to honor their relationship.

THE KA`U RED HAT LADIES and Kalae Quilters sponsor a spaghetti dinner to benefit Ka`u Hospital this Saturday from 4 p.m. to 7 p.m. at Na`alehu Community Center. Tickets are $9.99 and can be purchased at the door.

KA `OHANA O HONU`APO and Hawaiian Civic Club of Ka`u showcase demonstrations in Hawaiian crafts, games, and hula this Sunday, from 1 p.m. to 4 p.m. at Honu`apo Park. `O Ka`u Kakou will be selling shave ice and hot dogs, the Civic Club will be selling their hand-made Hawaiian items, and Ka `Ohana O Honu`apo will be selling T-shirts, water bottles and juice cans.

THE WORKFORCE DEVELOPMENT COUNCIL has formed a West Hawai`i Sustainable Agriculture Skills Panel and is asking Kona, Kohala and Ka`u farmers to voice their concerns and solutions to help develop agriculture in the area. The forum is set to meet on Tuesday, March 6 in Kailua-Kona at King Kamehameha Kona Beach Hotel from 8:30 a.m. to 4:30 p.m. There is no cost to participate in this forum. The forum has five focus areas: ag innovation and sustainability, education, infrastructure, recruiting, and food system. The forum is hosted by Hawai`i Department of Ag and Department of Labor. Guests are asked to RSVP to standford.j.fichtman@hawaii.gov. Call 808-586-8672 for more.

Posted by The Ka`u Calendar at 9:41 AM Links to this post