PAHALA PUBLIC & SCHOOL LIBRARY INCREASES public service days and hours of operations from 15 hours a week to 34 hours a week starting Monday, Sept. 30. The daily schedule will be as follows:
“Come and support your public and school library by checking out materials from the collection and also using the computers,” said branch manager Debbie Wong Yuen. “A few years ago, Pahala Library was close to closing its doors due to low usage of the library. To keep these new hours of operation, the community and school needs to make use of the library.”
The library has four desktop computers and 21 laptops for the public and students to use free with a Hawai`i State Public Library card. It also offers free Wi-Fi connection during open hours, with a library card.
Pahala Library offers a large DVD collection. Patrons can check out a movie for one week for $1 per DVD. Also, CDs, audiobooks, books and magazines are available for three-week loan periods. If the library does not have it in its collection, it can be requested from other libraries free of charge.
Besides the collection at Pahala library, the Hawai`i State Public Library System offers a wide range of online databases and other free services, such as e-learning through Learn4Life and Microsoft IT Academy, which offers many free classes. Downloading of ebooks and audiobooks through OneClickDigital and OverDrive services is also available. Log onto librarieshawaii.org to see all the many free services offered.
For more information, contact Wong Yuen at 928-2015.
To comment on or “like” this story, go to facebook.com/kaucalendar.


KA`U’S STATE SEN. RUSSELL RUDERMAN has offered testimony in favor of a bill before the Hawai`i County Council that would ban fracking, or hydraulic fracturing, according to Colin M. Stewart, of Hawai`i Tribune-Herald. “I urge you to pass this bill to protect our water table from irreversible damage from fracking,” he said during a meeting of the Council’s Agriculture, Water and Energy Sustainability Committee. “Here in Hawai`i, we’ve been lucky to take water for granted, but it won’t be that way forever.
“This isn’t an imaginary concern. It’s of great importance – the drinkable water on our island. Protecting it is what we have to do. Otherwise, we might find ourselves up a creek without a paddle, and that creek won’t be drinkable.”
In April, the 2013 state Legislature adopted a resolution introduced by Ruderman expressing concern about the use of fracking in Hawai`i. “A proactive approach should be taken to safeguard the people of Hawai`i, the environment, and Hawai`i’s natural resources by opposing the use of hydraulic fracturing,” the resolution stated.
Ka`u Council member Brenda Ford previously said she introduced the bill because she is concerned about the possible use of hydraulic fracturing in geothermal energy development on Hawai`i Island and contamination of the island’s drinking water supply by chemicals used in the process. “I’m not against geothermal, and I’m not against drilling,” Ford said.

The process uses pressurized liquid injected into the ground in order to extract resources, usually fossil fuels.
See more at hawaiitribuneherald.com.
To comment on or “like” this story, go to facebook.com/kaucalendar.

KAU`S U.S. REP. TULSI GABBARD released the following statement regarding the fifth anniversary of what she called the worst economic crisis since the Great Depression: “The livelihoods of hard-working families were put at risk and, since 2008, millions of Americans have lost their homes and have seen their life savings wiped out – all because of risky banking practices and the overgrown ‘too big to fail’ banks. While our economy has slowly started to come back from this devastating hit, it remains at risk.
“After the taxpayer bailouts of Wall Street, the biggest banks are even bigger than they were before the crisis. This dysfunctional regime means Wall Street enjoys the profits in good times, and the taxpayer is on the hook when things take a turn for the worse. We must ensure that no bank is so big that its risky bets can bring down the entire U.S. economy. We must create a banking system that works for every American, not just Wall Street CEOs, and work to enact and strengthen reforms that will protect our economy from another massive collapse.”
Earlier this year, Gabbard co-sponsored H.R. 129, the Return to Prudent Banking Act, which would reinstate provisions of the Glass-Steagall Act to keep investment banking separate from commercial banking, as well as prevent the largest banks from engaging in speculative trading.
To comment on or “like” this story, go to facebook.com/kaucalendar.

HAWAI`I VOLCANOES NATIONAL PARK ANNOUNCES flight plans today and tomorrow for management to use aircraft to monitor and research volcanic activity, conduct search-and-rescue missions and law enforcement operations, support management of natural and cultural resources and maintain backcountry facilities.
Flights were scheduled over `Ola`a near Wright Road in Volcano Village and over Red Hill, Mauna Loa cabins and Mauna Loa summit this morning.
Tomorrow from 12 p.m. to 1 p.m., work will occur at Kilauea summit.
“The park regrets any noise impact to residents and park visitors. Dates and times are subject to change based on aircraft availability and weather,” the park said in a statement.
To comment on or “like” this story, go to facebook.com/kaucalendar.

UPLINK ALL-STARS INVITE PARENTS AND `OHANA to their first quarter Ho`ike on Friday, Oct. 4 from 3:15 p.m. to 5:15 p.m. The Filipino Culture class will be performing the Tinikling dance, a traditional folk dance named after the Tikling bird. Tinikling literally means Tikling-like. The dance mimics the grace of the Tikling bird as it dodges bamboo traps set by rice framers.
“I am very excited to see that even non-Filipino students are taking an interest in this class, bringing even more cultural awareness to Ka`u’s unique community,” said coordinator Thu-Tam Doan.
Other performances at the Ho`ike will include Ka Nani a’o Ka`u and Lean on Me by the Hawaiian Culture class, Stylin’ Fashion Show by the Creative Arts class, Merenge Hip-Hop dance by the Zumba class and a Gentlemen routine by the student-led dance troupe.
UPLINK All-Stars will provide two free plate dinners to each family who attends with their UPLINK All-Stars student. To RSVP, contact Doan at 557-7414.
For more information on the UPLINK All-Stars After-School program, contact Doan or Liza Saplan at 928-2006 or 333-4903.

MATS FOGELVIK, OF OCEAN VIEW, RECEIVED an Honorable Mention award at Hawai`i’s Woodshow with his Pua Koa. The award recognizes outstanding execution and design. The show, sponsored by Hawai`i Forest Industry Association, was held Sept. 1 – 15 at Honolulu Museum of Art School at Linekona.
Fogelvik said the top of his table is made of five pieces of very unusual koa burl wood from a fallen tree on Maui. It had previously been displayed at Maui Arts and Cultural Center and Volcano Art Center.
For more about the show, see woodshow.hawaiiforest.org.
To comment on or “like” this story, go to facebook.com/kaucalendar.

A BIPARTISAN STATES’ RIGHTS MEETING takes place Friday at 9:30 a.m. at the upper pavilion of Punalu`u Bake Shop in Na`alehu. Organizer Robert Williams calls it S.O.S. – Save Our States. For more information, contact Williams at 929-8565.

SILK PAINTING WORKSHOPS ARE SCHEDULED Saturday at Volcano Art Center’s Ni`aulani Campus in Volcano Village. A workshop for beginners takes place from 10 a.m. to 1 p.m., and a three-hour intermediate workshop begins at 2:30 p.m.
Fee is $65 or $58.50 for VAC members, plus a $10 supply fee per session. Call 967-8222 to sign up.

SUPPORT OUR SPONSORS AT PAHALAPLANTATION-COTTAGES.COM AND KAUCOFFEEMILL.COM. KA`U COFFEE MILL IS OPEN SEVEN DAYS A WEEK. 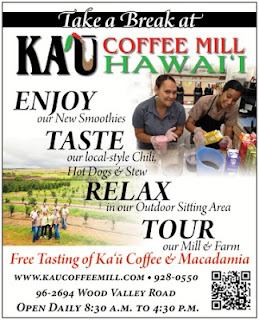