THE NEW STATE SENATE SEAT and new lines for the state House of Representatives that split Ka`u into two districts drew few people to a public hearing last night in Hilo. Some people testified that the Hilo Senate seat should be moved, which could pit Sen. Gil Kahele against former mayor Lorraine Inouye, who said she too will run for Senate. The redistricting now goes to public hearings and should be finalized by the end of the month. Candidates may be able to file papers to run for the state Legislature in March. The primary election is in August.

PERFORMANCE-BASED PAY and new evaluation methods for teachers passed the state Board of Education yesterday in an attempt to save $75 million in Race to the Top federal funding. The new measures would establish longer probations for new teachers seeking tenure. Annual evaluations would be tied to individual pay. The school board received a report from Tammi Chun, Gov. Neil Abercrombie’s education policy adviser, who, according to a Civil Beat story, said the administration has legal authority to install the performance management system, although it could be challenged by the teachers’ union. The governor wrote to the Board of Education saying evaluations of teachers will help reward the effective ones, remediate the marginal ones, dismiss ineffective ones and provide the right personal development for all of them, the Civil Beat story by Kathryn Poythress said. The union, school principals and other DOE staff will work together to come up with the evaluations. The proposal now goes to the union for its recommendation and approval.

PLANS FOR THE NEW KA`U DISASTER SHELTER and gymnasium are expected to be released tomorrow by the county Department of Public Works, which is building it; the county Department of Parks & Recreation, which will manage it; and PBR Hawai`i, which has written the Environmental Impact Statement that will be up for review by the public for a month starting tomorrow. The website is http://oeqc.doh.hawaii.gov.
AN ONGOING SWARM of shallow earthquakes started after midnight last night about three miles northwest of Halema`uma`u Crater, reports Hawaiian Volcano Observatory. Forty-eight earthquakes were strong enough to be located beneath Kilauea. The largest, with a preliminary magnitude of 3.4, was recorded at 6:56 a.m., with two deep quakes beneath the southwest rift zone, two beneath the southeast summit caldera, one within the upper east rift zone and four on south flank faults. For more information, visit http://volcanoes.usgs.gov/hvo/activity/kilaueastatus.php.
PAHALA PUBLIC & SCHOOL LIBRARY and its book drop reopen tomorrow. Hours of operation will be Monday, Thursday and Friday from 11 a.m. to 4 p.m. The library is closed on Tuesday, Wednesday, Saturday, Sunday and all state holidays. “To assure that Pahala Public & School Library can stay open, we are encouraging people to use the library on a regular basis, which will support the statistics to show the library is needed in Pahala,” said Ka`u Branch manager Debbie Wong Yuen. The library offers a wide range of books, CDs and audio books for all ages, free to check out. DVDs can be checked out for one week with a $1 charge. Library staff and patrons can go online to find any book, CD or DVD in the library system and order them shipped here. The library also has computers with Internet connection and will soon have Wi-Fi connection. All these services are free with a Hawai`i State Public Library card. An individual’s first card is free of charge.
Despite staff shortages at both Na`alehu and Pahala, both Ka`u libraries have been trying to stay open. When there is no permanent staff person to open either one of the libraries, one location will have to close for that day. Wong Yuen advises patrons to phone the library, and listen to the recorded message which will alert patrons of a closure. Call Pahala Public & School Library at 928-2015 and Na`alehu Public Library at 939-2442. 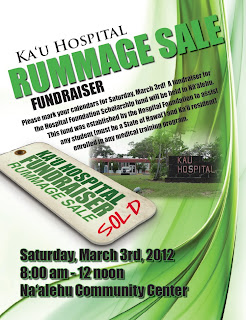 DONATIONS FOR A RUMMAGE SALE to benefit Ka`u Hospital Charitable Foundation’s scholarship fund are being accepted this week. The scholarship fund assists any Ka`u student enrolled in any medical training program. Items can be dropped off at Kama`aina Kuts behind Na`alehu Ace Hardware through Saturday. The rummage sale takes place Saturday, March 3. Call Ursula at 896-2624.
THE KA`U RED HAT LADIES and Kalae Quilters sponsor a spaghetti dinner to benefit Ka`u Hospital this Saturday from 4 p.m. to 7 p.m. at Na`alehu Community Center. Tickets are $9.99 and can be purchased at the door.

SEE OUR SPONSORS AT WWW.PAHALAPLANTATIONCOTTAGES.COM AND WWW.KAUCOFFEEMILL.COM.
Posted by The Ka`u Calendar at 9:45 AM Links to this post