THE SEA GRANT PROGRAM IN HAWAI`I will receive over $1 million in federal funding to support ongoing coastal and marine research, extension, and outreach projects in Hawai`i, Sen. Mazie Hirono announced on Friday. 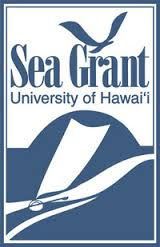 Earlier this year, in response to the Trump Administration’s effort to eliminate the Sea Grant program, Hirono led the effort to issue a bipartisan letter pushing back and explaining how deep cuts to NOAA would disproportionately hurt Hawai`i and other coastal states. Hirono advocated to Senate colleagues the benefits of Sea Grant not only for University of Hawai`i but for 32 other coastal universities.. Her advocacy helped to ensure the Trump cuts were rejected and that funding for Sea Grant was included in the recently enacted federal budget law that provides funding through Sept. 30, 2017.
“As an island state, Hawai`i’s livelihood is reliant on the health and resilience of our coastal and marine ecosystems,” said Hirono. “Research and conservation efforts conducted by Hawai`i Sea Grant play a critical role in addressing ongoing and future coastal and marine resource issues facing our state. I remain committed to protecting core research and extension programs, like Sea Grant, from the harmful budget cuts proposed by the Trump Administration.”
In 2015, Hawai`i Sea Grant activities resulted in the restoration of 426 acres of coastal habitat, the use of ecosystem-based approaches by 130 resources managers, 37 communities implementing sustainable development practices and policies, and 70 trainings to improve coastal community resilience. Hawai`i Sea Grant created or sustained 46 jobs, leveraged $4 million, educated over 140,000 K-12 students, and supported over 70 undergraduate and graduate students combined.
“Federal funding is critical to Sea Grant's federal-state partnership in connecting the university enterprise to community needs,” said Dr. Darren Lerner, Director of the University of Hawaii Sea Grant College Program. “Without the historic and continuing support of Senator Hirono and the Hawai`i delegation, our ability to magnify our federal funding 2-4 times its original value, to provide research, education and outreach in service to the people of Hawaii and the Pacific, would be lost.”
Part of a continuing grant funding award, the program received an additional $1 million in January. To learn more about the program, click here.

THE VOLCANO WATCH ARCHIVE is a treasure trove of volcano information, say the scientists from the U.S. Geological Survey's Hawaiian Volcano Observatory.

Since 1991, USGS Hawaiian Volcano Observatory scientists have written the weekly Volcano Watch column. While the theme of these articles is generally volcano-related, individual topics range widely. They include updates on current volcanic activity, historic accounts of past eruptions, explanations of monitoring techniques and technology, the comings and goings of HVO staff, and more.
Volcano Watch archive is a treasure trove of information on Hawaiian volcanoes. The recent redesign of HVO’s website (itself the subject of Volcano Watch on May 18, 2017) provides an opportunity to highlight this archive, which is online and freely available to all.
With over 1,000 articles on almost every volcano topic imaginable, the

Readers may find past Volcano Watch articles useful for researching a report or school project, while others simply enjoy perusing the collection. Longtime Hawai`i residents may appreciate a walk down memory lane, and newcomers might welcome a crash course in the history of volcanic activity in Hawai`i.
Since its inception, Volcano Watch has addressed ongoing events at Kīlauea and Mauna Loa. An example is the March 20, 2008, article, Something Had to Change After 25 Years, which provides an account of the events leading up to the opening of Kīlauea Volcano’s current summit vent and the return of a lava lake to Halemaʻumaʻu.
As illustrated by this example, new data and techniques sometimes cause scientists to change their hypotheses for how or why volcanoes behave in a certain way. Volcano Watch articles communicate these changes, providing updated interpretations as they arise.
For instance, the two-part article, Revolution in thinking about Kīlauea explosions comes to HVO (January 19 and 26, 2006), describes the years-long process by which HVO scientists changed their thinking about explosive eruptions at Kīlauea.
Careful mapping of tephra deposits around Kīlauea Volcano’s summit showed that some were the result of ash and other volcanic fragments being thrown up to 5 km (16,000 ft) into the air—high enough to be caught in the jet stream. This suggested that Kīlauea is capable of much more powerful explosions than previously thought, which contributed to it being ranked in a 2005 U.S. Geological Survey report as the highest threat volcano in the United States (https://pubs.usgs.gov/of/2005/1164/).
New monitoring instruments and techniques are often the focus of Volcano Watch.  Examples: Rainbows on the Ground (November 19, 2015), which tells how satellite data is used to measure a volcano’s changing shape, and Farewell to legacy seismic systems—welcome to ARRA upgrades in Kīlauea Caldera (July 21, 2011). These articles track the evolution of technology employed by HVO and provide a sense of the myriad methods that scientists use to gain knowledge about volcanoes.
Some of the most timeless Volcano Watch articles detail the history of eruptions in Hawai`i. A look back at Mauna Loa (December 1, 2011), which recaps observations of the volcano’s 1933 eruption. Another article, High Chief Keli`ikuku’s Pride Devastated by Unusually Long Kīlauea Eruption (June 7, 2007), recounts the story of a large Kīlauea lava flow that devastated most of Puna north of Pāhoa before ending around 1470 CE.
History buffs might enjoy

For more recent volcanic activity, check out Looking Back at the Kamoamoa Fissure Eruption (March 7, 2013), a four-day event in 2011. If you’ve wondered about the lava flows along Chain of Craters Road in Hawaiʻi Volcanoes National Park, read The Mauna Ulu Eruption: 1969-1974 (May 27, 1994) to learn their origin.
There’s even an article about Volcano Watch: The story behind the ‘Volcano Watch’ Columns (September 30, 2010) is in the archive.
To reach it, go to “Quick Links” in the top right corner of HVO’s homepage (https://volcanoes.usgs.gov/hvo/). Click on Volcano Watch to open the current article, and then use “Search” to find archived articles by title or date. 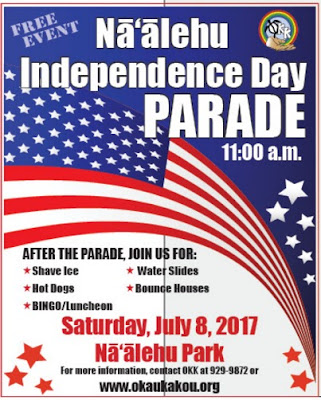 37th Annual Hawaiian Cultural Festival & BioBlitz,Sat, July 8, Kīlauea Military Camp in Hawai‘i Volcanoes National Park. Engage in Hawaiian cultural practices and learn how Hawaiians live closely to the land as its stewards. Enjoy hula and music, watch skilled practitioners demonstrate their art, and try your hand at Hawaiian crafts. BioBlitz is a chance to join scientists and cultural practitioners and discover the biodiversity that thrives in the park. Cultural Festival, 10 a.m. to 3 p.m.; BioBlitz, 8 a.m. to 1 p.m.

Posted by The Ka`u Calendar at 10:21 PM Links to this post