HAWAI`I COUNTY COUNCIL HOLDS two meetings on Wednesday.
Dengue fever is the topic of a special meeting. State Department of Health and County Civil Defense officials are expected to present briefings. Also, Sen. Josh Green and Rep. Richard Creagan have been invited to present their ideas.
In his request for the special meeting, South Hilo Council member Aaron Chung said, “Although I am fully aware that the state and county have been working jointly on a community outreach program consisting of, among other things, public informational meetings and websites, I also believe that redundancy in terms of disseminating information is a good thing in this particular situation.”
Chung said he wants to understand the operational aspects of their efforts and whether they would be able to offer a prognosis regarding the outbreak.
A county tax on medical marijuana is on the council’s regular meeting agenda. Kohala Council member Margaret Wille introduces a resolution urging the state Legislature to amend state law and allow a county sales tax of up to five percent of dispensaries’ gross sales.
“Based on the experience of municipalities that currently permit medical marijuana dispensaries, the operation of medical marijuana dispensaries and production centers will create a significant new burden on the social and emergency services that are provided by the counties,” Resolution 339-15 states.
Held in Hilo, the regular meeting begins at 9 a.m., and the special meeting begins at 1 p.m.
Ka`u residents can participate via videoconferencing at Na`alehu State Office Building.
Meetings are streamed live, and agendas are available, at hawaiicounty.gov.
Read comments, add your own, and like The Ka`u Calendar News Briefs on Facebook.

HURRICANE SEASON ENDS TOMORROW, and the holiday season begins on the back of a rainy summer and fall. Kevin Kodama, of the National Oceanic & Atmospheric Administration in Honolulu, created the composite at the top of today’s Ka`u Calendar News Briefs showing the record number of hurricanes that swirled around Hawai‘i this year, and The Ka`u Calendar added expectations of another visitor soon to arrive.
Climate conditions pointed to an above-normal hurricane season in the Central Pacific Basin this year, according to NOAA’s Central Pacific Hurricane Center. Hurricane season began on June 1. The outlook called for a 70 percent chance of an above-normal season, a 25 percent chance of a near-normal season and a five percent chance of a below-normal season. NOAA expected five to eight tropical cyclones to affect the central Pacific this season. An average season has four to five tropical cyclones, which include tropical depressions with winds of up to 38 miles per hour, tropical storms with maximum winds up to 73 mph and hurricanes of higher wind speeds.
The outlook was based on El Nino continuing and possibly strengthening as the hurricane season progressed. El Nino decreases vertical wind shear over the tropical central Pacific, favoring development of more and stronger tropical cyclones. It also favors more westward-tracking storms from the eastern Pacific. This combination typically leads to an above-normal Central Pacific hurricane season, according to NOAA.
Category-three Olaf was the most recent hurricane to head toward Ka`u. Olaf turned northeast and bypassed Hawai‘i several hundred miles to the east in late October. Once Olaf gained enough northern latitude, a drier environment with an increase in southerly or south-southwesterly shear resulted in weakening.
Olaf followed thunderstorms from remnants of Tropical Depression Nora that battered Ka`u on Oct. 16. Nora zigzagged her way toward South Point before tracking south of Hawai‘i Island. Many residents reported lightning and thunder that appeared to be directly overhead. Lightning struck a transformer in Pahala, causing power outages to several residents.
Oho was the first of three tropical storms spawned in the Central Pacific that threatened Ka`u. Hurricane Oho packed maximum sustained winds near 85 miles per hour with higher gusts in early October. Rain moved into the area as the storm passed offshore, parallel to the Ka‘ū Coast.
Tropical Storm Niala, also born in the Central Pacific, tracked south of Ka`u in late September, bringing heavy rain with it.
Although Tropical Storm Jimena passed far north of Hawai‘i, it brought hot and humid conditions to Ka`u in early September.
Gov. David Ige signed an emergency proclamation in anticipation of the arrival of Hurricane Ignacio. Ignacio was a category-four hurricane as it approached Hawai`i in late August and early September. The proclamation activated the Major Disaster Fund set aside by the Legislature for disaster relief for the entire state. It also allowed easier access to emergency resources at state and federal levels, along with the ability to suspend certain laws as needed for emergency purposes. The storm skirted the state to the north.
The Central Pacific Tropical Storm Kilo passed south of Ka`u in late August. Warm sea surface temperatures and relatively weak shear contributed to its strengthening into a hurricane as it tracked toward Kaua`i. In advance of Kilo’s possible landfall in the state, Gov. David Ige signed an emergency proclamation making Major Disaster Funds available for disaster relief.
In mid-August, Hilda was downgraded to a tropical depression and passed far enough to the south of Hawai‘i to avoid any wind impacts. However, the associated moisture plume north of the system triggered heavy rainfall over portions of the state, especially over the Big Island. On the morning of Aug. 11, its forecast track showed landfall at Pahala, but Central Pacific Hurricane Center moved the forecast path further south later that day.
Guillermo passed to the north of Hawai‘i Island in early August. The hurricane was the seventh named Pacific tropical storm that developed in the Eastern Pacific. Hawai`i Volcanoes National Park closed all backcountry areas. In addition, Mauna Loa Road from Kipukapuaulu to the Mauna Loa Lookout and Namakanipaio Campgrounds and A-frame cabins closed. Visitor centers, restrooms, Thurston Lava Tube, front-country trails, steam vents and other popular features remained open.
Although hurricane season ended Nov. 30, forecasters said that because El Nino conditions continue, tropical storms could develop during the winter months.
Read comments, add your own, and like The Ka`u Calendar News Briefs on Facebook.

“MY RESPONSIBILITY IS TO THE PEOPLE of Hawai`i and the American people to stand up and fight for what is right and what is in the best interest of our country,” U.S. Rep. Tulsi Gabbard told Emmarie Huetteman, of The New York Times, as reported on MSN. “That has nothing to do with party politics.”
Gabbard’s comments relate to her defiant remarks regarding fellow Democrat Pres. Obama’s strategy in Syria. Gabbard wants to defund America’s efforts to overthrow President Bashar al-Assad, saying that keeping him in power would keep ISIS from becoming more powerful.
See msn.com.
Read comments, add your own, and like The Ka`u Calendar News Briefs on Facebook.

VOLCANO VILLAGE ARTISTS HUI Tour & Sale continues until 4 p.m. today. Meet artists in their studios throughout the village. For a map and more information, call 987-3472 or 985-7487, or see VolcanoVillageArtistsHui.com.

CHRISTMAS IN THE COUNTRY events continue at Volcano Art Center Gallery in Hawai`i Volcanoes National Park today.
From 11 a.m. to 2 p.m., Christine Taylor Sprowl Tetak signs copies of her children’s book, Legend of The Hula Moose. This fictional book contains many true facts, along with illustrations by Diane Lucas. Parents and grandparents will enjoy sharing this story with their keiki.
From 11 a.m. to 1 p.m., Gretchen Grove helps participants make holiday cards and gift-wrap to accompany gifts purchased at VAC Gallery. Supplies are provided; no purchase necessary.
The gallery in Hawai`i Volcanoes National Park is open 9 a.m. to 5 p.m. daily.
Events are free; park entrance fees apply.

HAWAI`I WILDLIFE FUND HOLDS its final Ka`u Coast Cleanup of the year this Saturday. Volunteers gather at Wai`ohinu Park at 7:45 a.m. to carpool to Kamilo Beach. Register at kahakai.cleanups@gmail.com. 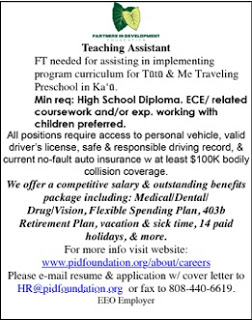 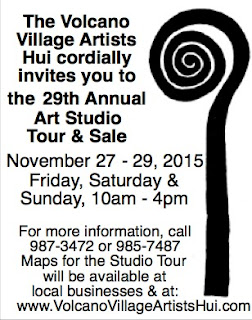 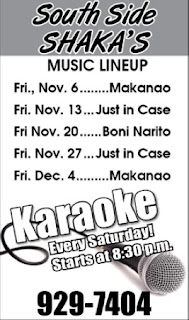 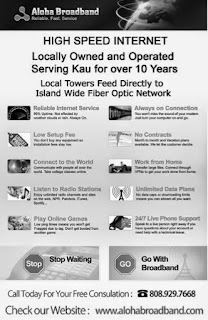 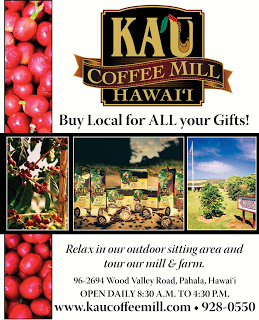 Posted by The Ka`u Calendar at 11:22 AM Links to this post