GOV. NEIL ABERCROMBIE HAS CALLED for a special legislative session on marriage equity to convene on Oct. 28. “The decision to call a special session is based on doing what is right to create equity for all in Hawai`i,” Abercrombie said. “The merits of holding a special session include the opportunity for the Legislature to focus squarely on this important issue without having to divert attention to the hundreds of other bills introduced during a regular session. In addition, if full advantage of various tax and other financial issues is to be achieved for citizens, passage before the end of the calendar year is essential.”
Last month, the governor shared with legislators and the news media a marriage equity bill based on Senate Bill 1369, which was introduced in the 2013 regular session.
Community input was taken into consideration while the state attorney general’s office worked closely with elected officials and a number of legislative staff to craft and further refine the bill.
“I am calling for a special legislative session because we must ensure the civil rights of every citizen are protected,” Abercrombie said. “There is no reason to deny the benefits of marriage to any individual. Marriage is a choice that is made by people who want to make a lifelong commitment. This is a right that is as sacred as our right to vote.
“This is a civil right, and it can no longer be denied. One of the lessons learned from the civil rights movement is that to achieve success in the fight for justice, we should not and cannot wait to correct a wrong. Now is the time to make this right.”

For the latest version of the Marriage Equity Bill, see governor.hawaii.gov/wp-content/uploads/2013/09/Marriage_Equity_Bill_AG_9_9_13.pdf.
To comment on or “Like” this story, go to facebook.com/kaucalendar. 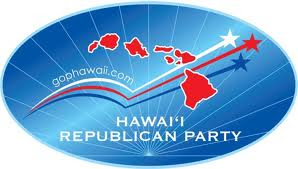 THE HAWAI`I REPUBLICAN PARTY EXPRESSED DISAPPOINTMENT in the governor’s decision to call a special legislative session on marriage equity. “Although we respect the rule of law, this issue deeply divides our state and should be considered during the regular legislative session,” the party’s statement said. “Rather than welcoming an open dialogue, Gov. Abercrombie has once again resorted to strong-arm tactics to pressure members of his own party just to advance his polarizing agenda. Our high cost of living, under-funded state pension accounts, and lack of funding for school facilities and transportation are important issues to the people of Hawai`i, but the governor has never rushed to fix those issues in a special session. Ultimately, the governor is using this issue to ensure his win in the 2014 Democrat primary election and ignoring the many people of Hawai`i who feel that a special session will limit public input and lack transparency.”
To comment on or “Like” this story, go to facebook.com/kaucalendar.

KA`U RESIDENTS DISCUSSED ISSUES WITH THEIR COUNTY COUNCIL member Brenda Ford yesterday. Many of them expressed their for support for naming the new gym and emergency shelter, being built on the school campus in Pahala, after former school principal Laurence Capellas. They referred to Capellas’ successes in bringing the community together through sports, afterschool activities and other community efforts that “got people from Na`alehu to cross the stone wall” that kept Pahala and Na`alehu communities apart.
One of the last community-binding efforts by Capellas during his stay in Ka`u was to change the name from Pahala High to Ka`u High. He did this in a democratic way, asking the students to vote on the issue and then taking the results to management at the Department of Education and other officials. The name change came in 1959.
He also started the kindergarten in Pahala. When Kapapala School shut down near the intersection where Wood Valley Road turns into the valley, he organized volunteers and the sugar company to haul pieces of the school down to Pahala to build it.
When the meat-packing plant at Kapapala Ranch shut down, Capellas worked again with volunteers to bring the metal framing to form the framing to build Pahala’s swimming pool.
He also created a shop program, even for first grade. The teacher was Herbert Watanabe, who later became a member of the state Board of Education.
See more on other issues discussed during the meeting with Ford in tomorrow’s Ka`u News Briefs.
To comment on or “Like” this story, go to facebook.com/kaucalendar.

OCEAN VIEW FAMILY HEALTH CLINIC will see its last patient this Friday afternoon, Sept. 13. It is the only medical clinic in Ocean View and is served by two nurse practitioners, Vickie Crosby and Cindy Cohen. They see 4,000 patient visits a year. Crosby, who owns the clinic with her husband Rick, who handles much of the administrative work, is moving to the mainland.
Practitioner Cohen and patients who contacted The Ka`u Calendar are hoping that someone will buy the facility and allow its service to continue.
The property is two acres with a building of more than 4,000 square feet. There is a clinic on one side of the building and a separate three-bedroom, two-bath home on the other side.
The clinic has two examining rooms, an office, a waiting room and two restrooms. The clinic is being sold with all of its equipment. The entire building is permitted to be a clinic, said Rick Crosby.
Laura Scholz, an Ocean View resident and patient of the clinic, said that “losing the Ocean View Clinic would be a big blow,” as it is difficult to get appointments at Bay Clinic in the nearest town of Na`alehu. She said that nurse practitioner Cohen is beloved by the community.
Cohen said she wants to continue to serve the community and bring in a doctor to work with her. “This is my home, and I want to stay here with my family. The Ocean View community is so dependent on us. So may people don’t have transportation” to go elsewhere, she said.
The price posted on a youtube tour of the clinic is $690,000, but offers will be considered, said Rick Cosby.
See youtube.com/watch?v=pgGLZVaego. Contact rick@oceanviewhealth.com.
To comment on or “Like” this story, go to facebook.com/kaucalendar.

MARLEY STRAND-NICOLAISEN, KA`U’S STAR PLAYER on the University of Hawai`i-Hilo women’s volleyball team, helped the Vulcans beat Fort Hays State from Kansas last night, 25-12, 25-20, 25-14 at UHH Gym. Strand-Nicolaisen, a freshman, came up with 11 digs and 10 kills. The next challenge is at Hawai`i Pacific University on Sept. 22 on O`ahu. The Vulcans are undefeated with five wins, all at home. Nicolaisen is a resident of Mark Twain.
Kurt De La Cruz, a Ka`u High graduate and academic adviser at UH-Hilo, recently posted on the Ka`u High alumni facebook page: “I get to see many great stories in the making, from when students enter as freshmen to the day they get their diplomas, to embarking on their first careers, etc. Here is a great story in the making, and this Trojan Alum (‘13) has come out swinging – literally! Calling Ka`u alums near and far – Marley Strand-Nicolaisen is a fast-rising star amongst the NCAA D2 Freshman ranks in women’s volleyball. In her first two starts at the college ranks, let’s just say she has not played like a freshmen. By no means is she a one-person show either, as Vulcan teammates have put in equally good work. 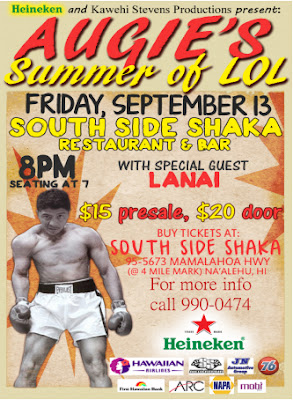 “The team will visit O`ahu … and California this season. If you get a chance, come out and let this Ka`u grad know that we support her and her teammates.
“With hard work, humility, and her fierce competitiveness, Marley has the potential to go down as one of UH-Hilo’s great ones. And it just so happens to be that her heart bleeds maroon. Stay tuned ... hiloathletics.com/news/2013/8/31/WVB_0831135844 .aspx?path=wvball.”
To comment on or “Like” this story, go to facebook.com/kaucalendar.

AUGIE’S SUMMER OF LOL comes to South Side Shaka’s Restaurant Friday at 8 p.m. Comedian Augie T starts a month of shows here in Ka`u, with more shows later this month in Hilo and on Maui and Kaua`i. Special guest is Lanai. Tickets are $15 in advance and $20 at the door. For more information and to purchase tickets, call 990-0474.

A STAFF MEMBER FROM U.S. REP. TULSI GABBARD’S office meets with Ka`u constituents tomorrow from 10:30 a.m. to 4:30 p.m. at Pahala Public & School Library to assist with casework and other issues.
For more information, contact Blaise De Lima at  blaise.delima@mail.house.gov or  808-987-5698.

A PAHALA POOL PARTY will be held this Saturday, Sept. 14 from 10 a.m. to 3 p.m. The event to raise money for the Pahala South Swell Swim Team will feature food, shave ice and drinks. The 21 Ka`u novice swimmers will be traveling on Saturday, Sept. 21 to Kawamoto Olympic Pool in Hilo; on Saturday, Oct. 5 to Konawaena Pool; and on Saturday, Oct. 26 for the championship at Pahoa Pool. The swim team is looking to raise about $1,500.
The public is invited, and prospective swimmers for next season are welcome to join in the fun. South Swell Swim team is comprised of youth 17 years and younger. Swim meets are sponsored by the county Department of Parks & Recreation. For more, call Pahala Pool at 928-8177. 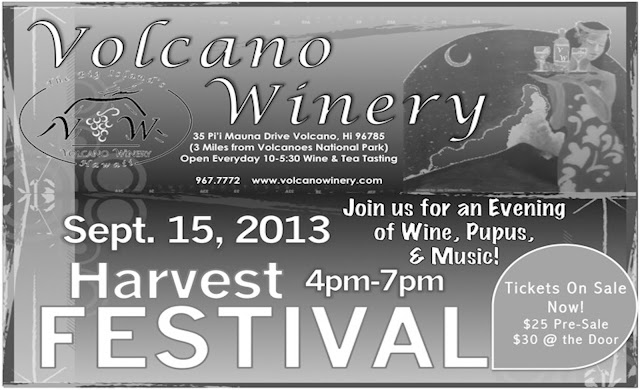 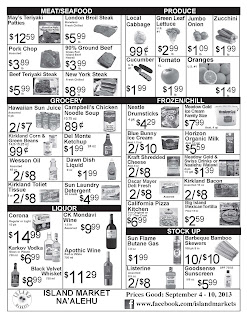 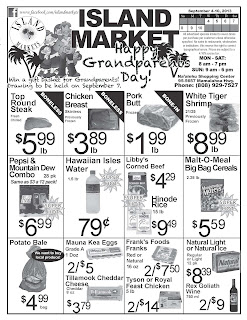