CHARLENE ON GREEN, with its environmental television, radio and online reporting and opinion, has been the most vocal in publicly questioning the `Aina Koa Pono plan to build a refinery between Pahala and Wood Valley and a biofuel farm between Pahala and Na`alehu. The CharleneOnGreen.org website recently called for the contract between the Electric Company and `Aina Koa Pono to be cancelled. It called its microwave technology – to install giant microwave reactors to vaporize biomass into gasses to make fuel - “disproven.” It claimed that the “timeline for HELCO and `Aina Koa Pono does not include growing any plants for the biofuel station,” even thought the application to the PUC is for the approval of locally grown feedstock. 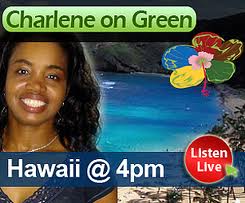 `Aina Koa Pono disagrees and says that microwave technology has long been used in the pharmaceutical industry and that it plans test plots of plants to see what will best grow in Ka`u. Charlene on Green is also the name of a television show on KHON every Saturday and Sunday at 3 p.m. and a radio show on O`ahu at KGU-AM 760. See charleneongreen.org.
The county and state say that no Environmental Impact Statement is required to build the refinery on the ag land on Meyer Camp Road, just off Wood Valley Road.
A public hearing on the contract between Hawaiian Electric and `Aina Koa Pono will be held on Tuesday, Aug. 2 in Hilo at 9 a.m. at the State Building and in Kona at 4 p.m. at West Hawai`i Civic Center.
KE KAHUWAI PONO, the trustee who oversees the rightful sharing of water, is the name of the state Commission on Water Resource Management overseeing a plan to be presented in August for public testimony. To update the County of Hawai`i's Water Use and Development Plan, hearings will be at 6 p.m. - one on Wednesday, Aug. 3 at Konawaena High School cafeteria in Kealakekua and the other on Thursday, Aug. 4, at Waiakea High School cafeteria in Hilo.

HAWAI`I, THE BIG ISLAND, will be new name of this place to be promoted by the Big Island Visitors Bureau and others campaigning for tourism who choose to depart from the last nickname - Hawai`i’s Big Island. That name - Hawai`i’s Big Island - didn’t stick and sometimes confused people, according to members of the Hawai`i Tourism Authority and Big Island Visitors Bureau. United Airlines started promoting the Big Island some 30 years ago in advertising its direct flights to Hilo. According to visitors bureau director George Applegate, as many as 40 percent of tourists thought Big Island meant O`ahu, with a big city and big population. When they got here, they found they were really out in the country. Using the term Hawai`i, the Big Island is more direct, first giving the true Hawaiian name of the island, then letting people know it is really big.

THE WOMEN AND INFANT CHILDREN nutrition program, commonly known as WIC, has increased its income limits to take in more families. A single pregnant woman can make up to $2,611 a month, and a family of four can earn up to $3,964 a month. The federally funded program provides vouchers to purchase such items as fruits, vegetables, eggs, juice and cereal for children up to the age of five. You can have a job and still qualify for WIC. See hawaiiwic.com or call 888-820-6425.
SEN. MALAMA SOLOMON is asking residents in the most remote parts of the state to stand up and be counted fairly during the current reapportionment process that will decide how many representatives they will have in their elected government.
She points to a 2011 Hawai`i State Reapportionment Commission decision that she says “robs Hawai`i County voters of fair and equitable representation by denying the addition of a 4th Senatorial Seat for the Island.” Solomon encourages everyone to call 877-854-6749.  Email reapportionment@hawaii.gov or send mail to State Capitol, Reapportionment Project Office, 415 S. Beretania St. Room 445, Honolulu, HI 96813, urges Solomon.
She explains that, given population growth over the past decade, if Hawai`i Island continues to have only three senators, each senator will represent 60,000 residents, where most other senators in the state will have only about 40,000 residents to represent.
“This clearly marginalizes Hawai`i County residents’ voice in all major decisions impacting their lives! How fair is that?” asks the senator. She objects to the inclusion by the 2011 Reapportionment Commission to include “nonresident military and dependents, nonresident students and incarcerated felons” in the population data used to determine districts.
She said that most of the military personnel are “nonresidents.” They consider their “homes” to be elsewhere in the USA where they are emotionally rooted and where they have permanent residences and where – historically — they vote.
Solomon says that a “fourth Senate Seat for Hawai`i Island, which also represents an additional vote for the neighbor islands as a group, can make a huge difference for neighbor islanders who are consistently left out by the Honolulu-centric manner that our state functions, both within and outside of government.”
The Hawai`i County Committee of the Democratic Party of Hawai`i has formally requested that the Statewide Reapportionment Commission reconsider its earlier decision on this matter.
The next meeting of the Reapportionment Commission in Honolulu is at 2 p.m. Tuesday, July 19, and there’s a place on the agenda to discuss “community input received.”
Solomon urges community members to send in testimony ahead of time.

A TALK ABOUT CONTAINER PLANTS AND HERBS is scheduled for 1:30 p.m. tomorrow during the Plant and Seed Exchange at Naohulelua Garden on Kamaoa Road from noon to 3 p.m. Garden tours will also be available.

ONE JOURNEY, THE LOCAL WINNERS of the statewide Brown Bags to Stardom competition, perform live at Kilauea Visitor Center Auditorium this Tuesday at 7 p.m. Their CDs will be available for purchase and autographs. This After Dark in the Park program is free. A $2 donation is requested, and park entrance fees apply.

Posted by The Ka`u Calendar at 9:35 AM Links to this post