CONCERNING THE `AINA KOA PONO proposal, the Public Utilities Commission yesterday published responses to questions asked by the state Consumer Advocate, Hawai`i County, the Department of Business, Economic Development & Tourism, and Life of the Land. The questions concern the proposed contract for `Aina Koa Pono to annually sell, at a fixed price for 20 years, 16 million gallons of diesel that would be manufactured at a refinery off Wood Valley Road above Pahala. The fuel, produced in 27 microwave units, would be sold to to Hawai`i Electric Light and Hawaiian Electric Companies, with most of it trucked up Hwy 11 to a power plant in Kona. It would mean higher electric bills on O`ahu and the Big Island.
One of the parties is Hawai`i’s state Consumer Advocate Jeffrey Ono who asked for a timetable illustrating significant estimated milestones of the AKP project.

Hawai`i Electric Light Co. and Hawaiian Electric Co. responded: Within six months from the contract's execution date, AKP would provide HELCO with a Life Cycle Assessment of the environmental impact of its project plan. “The results must show that AKP’s project achieves at least a fifty percent favorable reduction in greenhouse gases over the petroleum diesel currently used by HELCO. AKP has provided a LCA for the project,” states the utilities.
Within nine months, applications for key permits for AKP’s production facility would be filed.  Within 24 months, AKP would provide documentation of Project Financing. Within 36 months, all equipment and materials necessary to construct and complete AKP’s production facility would be delivered.
AKP would produce biodiesel at a rate of 38,000 gallons per week no later than 42 months from the contract execution date. Within 50 months, AKP would commercially produce the biodiesel at a rate of 300,000 gallons per week.
Regarding `Aina Koa Pono’s intent to conduct a voluntary Environmental Assessment, the Consumer Advocate asked for the current status of the EA and for a copy of it, “to the extent that the EA is complete.”
The electric companies replied that, “according to AKP, AKP has engaged RM Towill to conduct the EA. The first phase of the EA is to complete a Traffic Impact Assessment Report. The first of five tentatively planned phases for the EA are: Socioeconomic Impact Assessment, Archaeological Inventory Survey Plan, Cultural Impact Assessment, Flora & Faunal Biological Assessment & the Traffic Impact Assessment Report. No other phases of the process have been initiated at this time. Because the EA is not complete, there are no reports available.
“According to AKP, the timeline for the completion of the EA is dependent on the outcome of the Traffic Impact Report because any roadway improvements identified for the project could serve as a trigger for a HRS, Chapter 343 compliant EA.”
The Consumer Advocate asked why, if the minimum purchase amount of 14 to 16 million gallons of the proposed biodiesel will meet the annual fuel requirements to operate Keahole Power Plant, the proposed Biodiesel Supply Contract will not result in additional displacement or curtailment of other renewable energy projects in the future. HELCO replied that it expects to be able to use all of the contract biodiesel volume through consumption at Keahole Power Plant, and “contingency provisions allow for consumption” at other Hawaiian Electric Companies’ generating facilities. “The Hawaiian Electric Companies in aggregate currently consume over sixty-five million gallons of fossil diesel. Therefore, the proposed AKP Biodiesel Supply Contract will not result in additional displacement or curtailment of other renewable energy projects in the future,” the electric companies stated.
The Consumer Advocate asked for a description of the specific benefits associated with the community benefits package that has or will be provided by AKP.
According to the electric companies, “AKP provides that once the plant becomes operational and is delivering fuel, AKP would contribute at least $250,000 per year to a community benefits package focusing on education and the environment.
“According to AKP, on the advice of people in the non-profit funding community, AKP consulted with the Hawai`i Community Foundation on the efficacy of setting up the program through HCF. Talks between AKP and HCF have begun on this program. AKP anticipates working with HCF to develop the specifications for the fund (AKP has already identified that education and environment would be the focus). People knowledgeable in the funding community are expected to administer the benefits package, screen applicants to appropriate criteria (non-profit status, etc.) and present AKP with vetted options." AKP would then determine the actual recipients.
The electric companies reported that AKP would also set up an advisory board that would include community members from the Island of Hawai`i and the Ka`u District, as well as others. The report also states that “AKP has identified candidates for the advisory board."
HELCO and Hawaiian Electric Companies also stated that AKP plans to keep a portion of the $250,000 package separate from the HCF to enable response to “smaller, more pressing needs as they arise,” such as youth sports teams needing travel funds.
The Consumer Advocate asked for a detailed discussion of the companies’ and AKP’s efforts to conduct community meetings since the Commission’s rejection of its first contract “to get a better appreciation of the communities’ concerns with the proposed project.” The document asks the companies to identify each meeting held, the date of the meeting, the number of participants and the groups.

The electric companies reported that, “According to AKP, AKP determined with its consultants that formal open community meetings should be held after the impact assessments on traffic, archaeology, cultural factors and environment were at least in draft. Then, RM Towill would help organize formal, facilitated community meetings.
“However, AKP retained on-island consultants to help with outreach, and principals began to meet directly, one-on-one or in smaller groups, with people identified as key opinion leaders or community stakeholders. The purpose of the meetings was to give an overview of the plans, but more specifically, to elicit questions, concerns and ideas from these leaders. According to AKP, AKP met with members of `O Ka`u Kakou on the Island of Hawai`i on Oct. 4, 2012. AKP also had a group meeting with community members at Ka`u Coffee Mill on the Island of Hawai`i on Oct. 10, 2012.
“According to AKP, meetings were held with Hawai`i state legislators and legislators-elect from Hawai`i Island, as well as those in key energy positions. AKP renewed its relationship and held meetings with labor and trade groups, both on the Island of Hawai`i and state headquarters personnel on O`ahu. AKP also met with the Big Island Community Coalition and sought meetings (still being organized) with the Chambers of Commerce and other business groups. In the community, AKP principals met with Julia Neal of The Ka`u Calendar, the members of OKK and other members of the community.
“There are a number of efforts made by AKP to actively address the community’s concerns,” the electric companies said. “According to AKP, AKP announced it would first locate a single unit of the planned 27 (microwave) units onsite so residents could see the technology demonstrated.” Also, reported the electric companies, AKP has offered to take several community residents to the only operating plant in Wilkesboro, North Carolina.
“In addition, AKP agreed to carefully select truck routes from fields to the plant to minimize impact on residences,” stated the electric companies. AKP would also set aside 200 acres (of the 11,000 it plans to use) that farmers would be able to use for sustainable, agriculture crops, the utilities stated.
According to the electric companies, “AKP announced it would set up a community advisory board to maintain a dialogue with the impacted area.” The electric companies also report that AKP has collected and continues to solicit email addresses for eNews communication and that currently there are more than 300 names on the distribution list.
Complete responses to the Consumer Advocate’s questions are online at puc.hawaii.gov. Docket number is 2012-0185.
Responses to questions asked by other parties and participates will be reported in later Ka`u News Briefs. 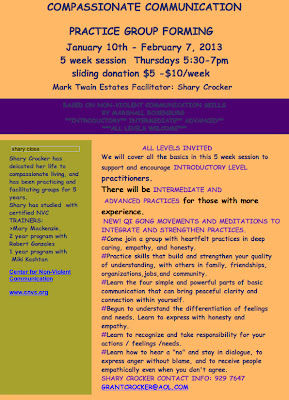 COMPASSIONATE COMMUNICATION is the topic of a practice group holding five weekly sessions begin this Thursday, Jan. 10 at 5:30 p.m. Shary Crocker has been practicing and facilitating groups for five years. All levels are invited. For more information, contact her at 929-7646 or grantcrocker@aol.com.

THE DEADLINE FOR YOUNG WOMEN to enter this spring’s Miss Ka`u Coffee Pageant is one week from today, Tuesday, Jan. 15. Categories are Miss Ka`u Coffee and Miss Ka`u Peaberry. By May 13, Miss Ka`u Coffee candidates must be ages 17 to 24, and Miss Ka`u Peaberry candidates must be ages 7 to 9. The winners reign over the annual Ka`u Coffee Festival on Saturday, May 4.
Applications are available at R&G Store in Pahala, Pahala Community Center, Grandma’s Closet in Na`alehu and Kahuku Gift & Garden Shop in Ocean View. For more information, call Gloria Camba at 928-8558 or Pahala Plantation Cottages at 928-9811. Organizers also welcome volunteers to help produce the pageant.

ALSO SEE KAUCALENDAR.COM AND FACEBOOK.COM/KAUCALENDAR.
Posted by The Ka`u Calendar at 1:56 PM