ALL-TERRAIN VEHICLES and utility-terrain vehicles would be allowed on any street, under legislation being considered today by the state Senate's Committee on Judiciary and Labor. The requirement would be that the ATV is used as farm equipment, the operator holds a current category 3 license or a commercial driver's license and the operator and passengers wear safety helmets secured with chin straps.
Testimony in support of Senate Bill 2726 SD1 came from the Hawai`i Farm Bureau, Hawai`i Cattlemen's Council, Inc., Hamakua County Farm Bureau and Hawai`i Agricultural Parterships. The state Department of Transportation, Honolulu Police Department and Maui Police Department opposed the measure. A report from the Senate Committee on Transportation & International Affairs stated,  "The regulation of ATVs is a matter of public safety. According to the United States Consumer Product Safety Commission, an estimated 135,100 ATV-related injuries were treated in hospital emergency rooms nationwide in 2008. In addition, there were 9,633 reported deaths between 1982 and 2008, with 14 of those deaths occurring in Hawai`i. Your committee believes that the use of ATVs is particularly dangerous for minors.
The Hawai`i Cattlemen's Council suggested that ATVs be allowed on public streets only in counties with populations less than 500,000, which would exclude O`ahu. The Cattlemen also recommended that the ATVs must be traveling between ag-zoned properties and that the drivers carry ID showing employment or ownership connected with ag property and that no ATVs be allowed on public roads after dark.
Hawai`i Farm Bureau president Chris Manfredi wrote to the Legislature saying that the Farm Bureau "strongly supports SB 2726 SD1 expanding the use of ATVs and UTVs relating to certain agricultural operations.
"The ATV and UTV are important alternative vehicles for farmers and ranchers who must traverse rough terrain. Farms and ranches are often separated by sections of highway. This measure seeks to address this situation while minimizing risk. Your strong support of this measure is requested to support farmers and ranchers to raise crops to meet Hawai`i's goal of increased self-sufficiency and sustainabilty," wrote Manfredi.
To comment on or “like” this story, go to facebook.com/kaucalendar.


HAWAI`I ISLAND POLICE ARE SEARCHING for a 65-year-old Na`alehu woman who was reported missing. Maffriette Silk was last seen in Kona on Feb. 5 wearing a white leather jacket and a beige dress. She has a medical condition that requires medication.
Silk is described as a five-foot, four-inch tall African-American with a muscular build. She wears a blond wig. She also has the name “Jesus” tattooed on her left shoulder blade and the name “Maffriette” tattooed on her right bicep.
Police ask anyone with information on her whereabouts to call the Police Department’s non-emergency line at 935-3311.
Tipsters who prefer to remain anonymous may call Crime Stoppers at 961-8300 and may be eligible for a reward of up to $1,000. Crime Stoppers is a volunteer program run by ordinary citizens who want to keep their community safe. Crime Stoppers doesn’t record calls or subscribe to caller ID. All Crime Stoppers information is kept confidential.

“SOME PEOPLE SAY SOLAR ENERGY is the answer, but that’s not it,” writes Hamakua Springs Country Farm owner Richard Ha on his blog at hahaha.hamakuasprings.com. Ha supports using geothermal and hydroelectric energy on Hawai`i Island to produce electricity. According to Ha, Hawai`i had the highest number of solar installations ever last year, but “twenty years from now, when those people have to put on a new roof and redo the solar panels, what will the economy look like then? If oil spikes, they might not have the financing to pay for it. Will they be able to afford it?
“Solar is a temporary answer, and maybe it’s a bridge, but it’s not the solution.”
Ha says the skyrocketing price of oil has impacted all our costs. “Everything is, noticeably, much more expensive: electricity, plane tickets, gasoline, retail goods that have to be transported here, food that needs fertilizer and has to be cooled enroute here. Everything—and it’s only going up.”
Ha discusses Iceland as a place that is using its resources to solve these problems. He toured a geothermal plant there that he says could last 60 years. He also said the hydroelectric system on his farm will last 100 years.
“As in Iceland, what we have going for us here is our geothermal potential,” Ha says. “I’ve said this so many times now that it sounds like I have an agenda, but I don’t. I don’t gain anything from our increased use of geothermal energy except for what we all will gain: stable energy costs, stable food costs, stable everything costs. The ability to better afford living in Hawai`i. The pleasure of knowing our kids and grandkids will be able to afford to stay and establish their career and family here, instead of taking off for a cheaper location on the mainland.  “An increased use of our geothermal resource will make a big difference in the quality of our lifestyle.
“We need a big picture solution. We have to come together to seek answers for all of us,” Ha says.
To comment on or “like” this story, go to facebook.com/kaucalendar.

JAPAN DURING SPRING BREAK is on the schedule for Seina Okimoto and Kamrie Koi. The study abroad program is sponsored by the Pacific and Asian Affairs Council. The duo is seeking sponsorship and donations to help offset high travel costs. From March 15-23 the girls will experience Fukuoka, Kyoto and Hiroshima, visiting cultural sites such as the Hiroshima Peace Memorial. They will also stay with a host family as they travel with 12 other students from across the state.

Koi and Okimoto are the only two Big Island students to be selected to the program, introduced to the opportunity through their participation in the Academic WorldQuest Competition, also sponsored by PAAC. The girls wrote essays and interviewed to gain a spot in the study abroad program.
Both Ka`u natives hail from Japanese ancestry, so the country naturally holds a unique place in their hearts. “Going to Japan would be a great privilege because I’ve never been to the homeland of my ancestors, neither did my parents. So, I would be the first in my family to see this special place,” said Okimoto. Koi also stated that she would be the first of her 11 brothers and sisters to visit Japan.
The girls are fundraising with school bake sales, working part time and partnering with `O Ka`u Kakou to sell shave ice. Presently, there is no program scholarship available, and each girl needs to raise $3,000 which includes international airfare, lodging, meals and other expenses. Both Koi and Okimoto are active at school, holding leadership positions in student government, participating in numerous clubs like National Honor Society and sports, while balancing the academic rigor of senior year. For any donations or questions, please email them directly at sie.okimoto@gmail.com or kamrie97@aol.com.
To comment or tot "“like” this story, go to facebook.com/kaucalendar.

BASIC GRANT WRITING, Board Development for Nonprofits, Farm Business Management and Remotely Piloted Aerial Systems are the titles of some of the many classes Ka`u residents may be interested in signing up for at half-price at University of Hawai`i – Hilo. The College of Continuing Education and Community Service received funding to help reduce tuition fees for the classes from the state Department of Labor and Industrial Relations’ Employment and Training Fund.
Other topics include communication skills, advancement techniques and tsunami preparation. Eligible participants must be currently employed outside of government. Funding maximum is $250; the employee or employer must cover any excess balance. Funds do not cover cost of books, tools, equipment or auxiliary and support services.
For more information on classes or to register, email ccecs@hawaii.edu, see hilo.hawaii.edu/academics/ccecs or call 974-7664.
To comment on or “like” this story, go to facebook.com/kaucalendar.
LEI HULU A ME ULANA PAPALE LAUHALA are topics Wednesday from 10 a.m. to 12 p.m. at Kilauea Visitor Center lanai in Hawai`i Volcanoes National Park. Kilohana Domingo demonstrates the art of lei hulu, or feather lei making, and his mother, Lehua Domingo, shares the `anoni style of weaving pandanus leaves into a papale, or hat. Both lei hulu and papale will be on display. Free; park entrance fees apply.

FUNDRAISING DINNERS TO HELP KEIKI pay registration fees for Na`alehu and Pahala Summer Fun programs will take place on Fridays, Feb. 28 at Pahala Community Center and March 21 at Na`alehu Community Center. The county planned to disband the programs in both locations until Nona Makuakane, of Pahala Community Center, suggested fundraising awards to help families pay for high registration fees. She enlisted Kathy Hashimoto and Leonora Hu, of Na`alehu Summer Fun, and Leina`ala Enos, of Queen Lili`uokalani Children’s Center, to see how they could solve the problem.
Interested parents or anyone who would like to help with the fundraisers by making a donation, selling tickets or helping prepare or serve are urged to call Pahala Community Center at 928-3102. Parents who help with the fundraiser will be guaranteed an award for their child to attend Summer Fun. The amount awarded will depend on the total received from the fundraisers.
Dinner this Friday will feature kalua cabbage, rice, mac salad and cake, while the March dinner will feature teri-beef, rice, corn and bread. Tickets are $7. Pick-up at both sites is from 4 p.m. to 5:30 p.m. 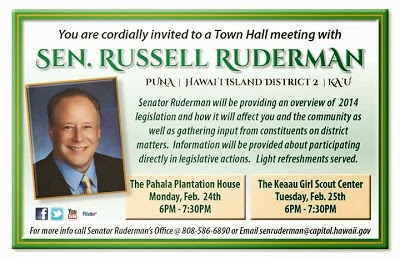 KA`U CHAMBER OF COMMERCE will hold its next meeting at 5 p.m. tomorrow, Monday, Feb. 24 at Pahala Plantation House. Discussion will include distribution of The Directoryand other Ka`u Chamber programs. Call Pres. Dallas Decker at 516-662-8789. 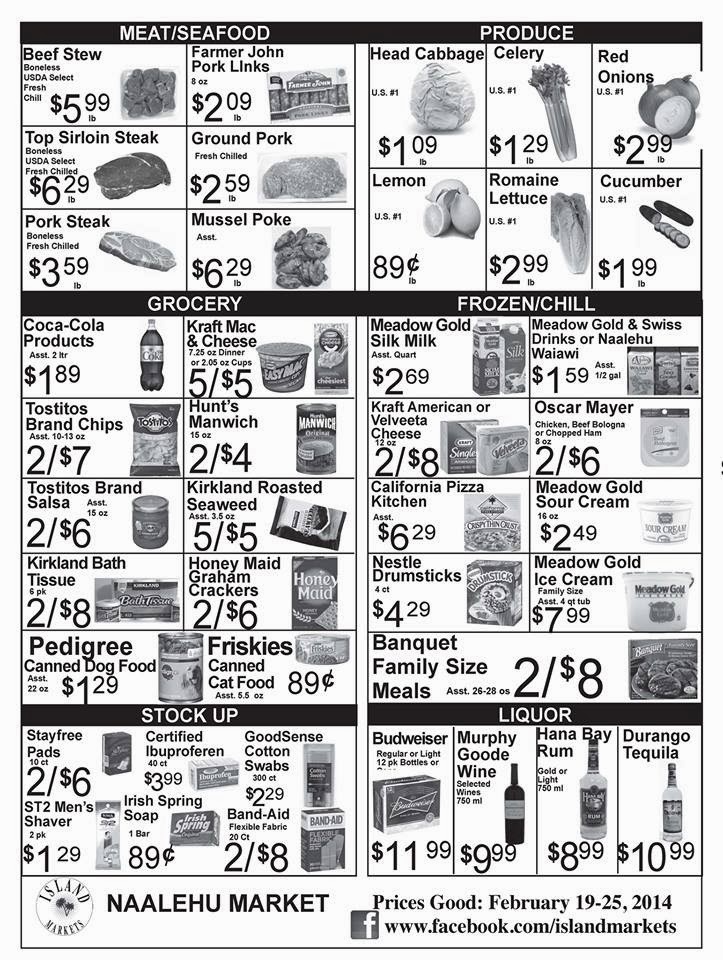 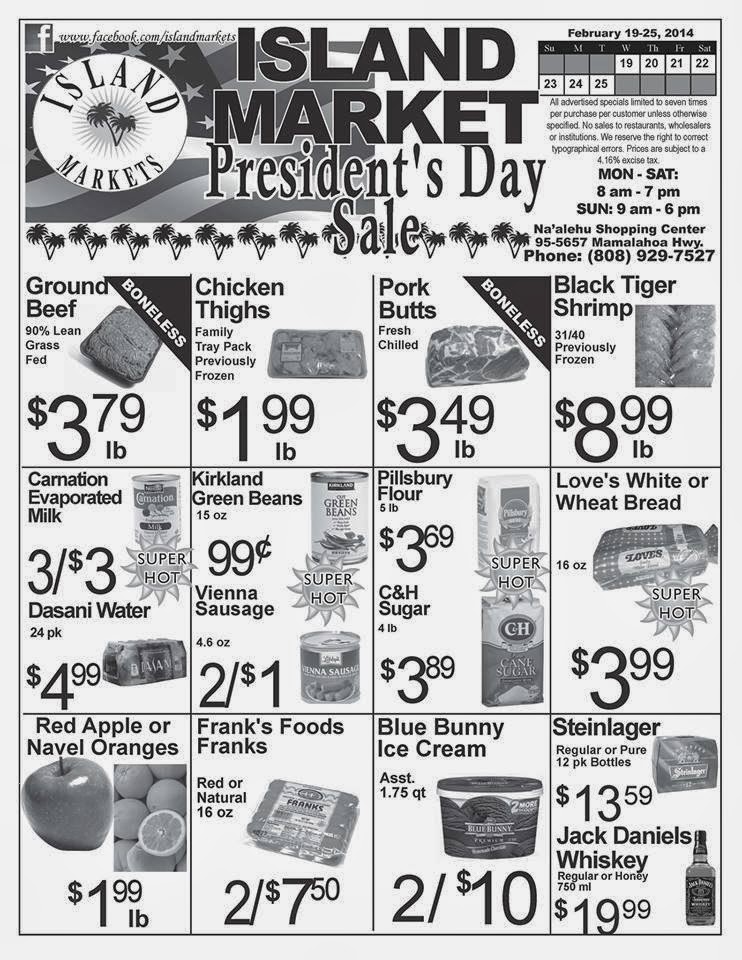 Posted by The Ka`u Calendar at 1:23 PM Links to this post