DELAYING LONG-TERM HELCO CONTRACTS like the `Aina Koa Pono proposal, until public comments are taken and two studies on renewable energy in Hawai`i are completed, is suggested in filings by Life of the Land with the Public Utilities Commission. One study is Hawaiian Electric Companies’ Integrated Resource Planning, for which HECO has a year to file a five-year Action Plan and a 20-year Master Plan to outline scenarios and strategies for Hawai`i’s long-term energy future. The other is the Hawai`i Clean Energy Initiative, for which the U.S. Department of Energy is holding scoping meetings and taking public testimony this week on the Big Island for a Programmatic Environmental Impact Statement to develop guidance for federal funding of the Clean Energy Initiative through 2030.

Life of the Land contends that the HECO Companies, including Hawai`i Electric Light Co, are filing numerous specific applications with the PUC and issuing many Requests for Proposals, “placing into the pipeline everything needed for the next several years. The timing of these filings will result in negating the costly, time consuming and comprehensive approaches” of the two studies, Life of the Land contends.
HECO has also opposed Life of the Land’s request to intervene in the PUC discussion of the `Aina Koa Pono proposal to sell biofuel to HELCO, which `Aina Koa Pono plans to produce from existing trees and brush it would clear between Pahala and Na`alehu, followed by crops it would attempt to grow there.
The Life of the Land filing contends that “`Aina Koa Pono proposed selling power to HELCO at such a high price that neither party will mention the amount, although they state that the cost to ratepayers over the 20-year contract was $120 million less than the initial outrageous proposal,” which was turned down last year.
Read more at http://puc.hawaii.gov/ where numerous `Aina Koa Pono documents can be found under “What’s New?”

PUBLIC SCOPING MEETINGS will be held by the federal Department of Energy at 5 p.m. this Thursday, Sept. 13, at Kealakehe High School in Kona and at 5p.m. on Friday, Sept. 14, at Hilo High School. The meetings are to gather public input for a programmatic environmental impact statement on the future of renewable energy in the Hawaiian Islands. According to the Department of Energy, its analysis will include “all forms of renewable energy, energy efficiency, alternative transportation fuels and electrical transportation and distribution.” DOE officials will make presentations on the programmatic EIS process under the National Environmental Policy Act. There also will be a question-and-answer session followed by a formal commenting session, which will be transcribed by a court reporter to ensure that all comments are available for DOE officials to consider during the preparation of the programmatic EIS. The EIS “will allow the DOE to develop guidance that it would use in making future decisions on whether to fund projects or take other actions to support the state in meeting its clean energy goals,” says the website at http://hawaiicleanenergypeis.com. Also see www.hawaiicleanergyinitiative.org.


DEADLINE TO SUBMIT TESTIMONY on proposed rules to govern the new Public Land Development Corp., which would allow more private sector economic development on state owned lands, is this Friday, Sept. 14. Comments can be emailed to joy.y.kimura@hawaii.gov and randal.y.ikeda@hawaii.gov. The PLDC has oversight from the state Board of Land and Natural Resources.

COUNTY COUNCIL CANDIDATE Brenda Ford met with area residents at Kilauea Lodge yesterday. The incumbent whose council district has been changed to include Ka`u into Volcano – she runs for reelection against Maile David on Nov. 6 – said she would push for implementation of the Volcano component of the Puna Development Plan. “I have always supported this plan. It is not even an issue for me. I believe in Community Development Plans,” she said. She said the group also talked about the need for a new Volcano garbage transfer station. Ford said the Volcano transfer station “is in very bad shape,” and that the Volcano and Ocean View transfer stations should be built simultaneously. She noted that the construction of the Volcano station was put on the side when the Pahoa one collapsed.
She said the group was “very concerned” about the proposed `Aina Koa Pono biodiesel refinery project in Ka`u. She said: “it doesn’t matter to me that the inputs would be agriculture. This is a toxic substance coming out of the refinery. It’s diesel and needs an Environmental Impact Statement.” She said that people attending her talk story were also concerned about the number of trucks that would travel on roads and highways, carrying the diesel to the power plant near Kona Airport.
Ford said that some of those attending discussed whether the county should take over Hawai`i Electric Light Company to make it a quasi-government owned utility, pointing to HELCO’s long term fuel contracts that end up costing citizens a lot of money.

A TALK STORY IN OCEAN VIEW with County Council candidate Brenda Ford and candidate for Prosecuting Attorney Mitch Roth is scheduled for tonight from 6 p.m. to 9 p.m. at the Ocean View Community Center. All are welcome to bring questions and concerns. The General Election is Nov. 6.


NEW SEWAGE TREATMENT SYSTEMS FOR PAHALA AND NA`ALEHU were discussed by County Council candidate Brenda Ford at her talk-story session in Volcano yesterday. Ford said she would advocate for a system that would treat and reuse the water in the sewer system for agriculture “rather than putting it down a hole.” She said she wants to renew a resolution she penned, which passed the County Council for 27 sewer projects. She said the resolution will ask, once again, for federal money for sewers including those in Pahala and Na`alehu where gang cesspools are being closed down by the EPA. “We are hearing rumbles that if Pres. Barack Obama is re-elected, he will do another stimulus program. Sewer funding could be part of the stimulus to the local economy,” she said.

A CANDLE CAUSED A FIRE at a Volcano home and gutted it over the weekend. The unattended candle apparently set the house ablaze with residents inside, reporting the fire at 11:09 p.m. Saturday at 7th and Pearl Streets in Mauna Loa Estate. Residents escaped. Estimated value of the damage is $210,000, a total loss. At 2 a.m. Sunday, the Hawai`i County Fire Department declared the fire pau.

KA`U’S KULEANA LANDOWNERS are invited to learn how the Office of Hawaiian Affairs can help them apply for property tax exemption at a meeting tomorrow, from 5:30 p.m. to 7:30 p.m. at Pahala Community Center.
Handed down through Hawaiian families for generations, kuleana lands are usually small parcels surrounded by larger tracts of property and sometimes are landlocked. Call 808-594-1967 for more information. 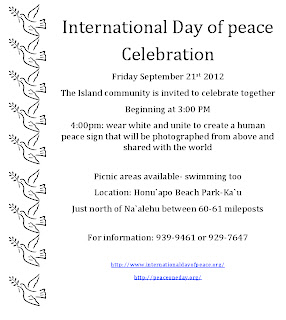 A RED CROSS VOLUNTEER MEETING is hosted Thursday, 7 p.m., in Ocean View at the H.O.V.E. Road Maintenance Corp. office. The meeting is geared towards current volunteers and those interested in becoming volunteers. For more, call Hannah Uribes at 929-9953.

HAWAI`I WILDLIFE FUND hosts a beach clean up at Kamilo Saturday from 8 a.m. to 2 p.m. All volunteers will meet at Wai`ohinu Park on Hwy 11 near mile marker 65 at 7:45 a.m. and are asked to bring sturdy shoes, bag lunch, sun and wind protection, plenty of drinks and four-wheel-drive vehicles if possible. HWF will supply cleanup materials. Those interested can contact Megan Lamson at 769-7629 or kahakai.cleanups@gmail.com.

INTERNATIONAL DAY OF PEACE will be celebrated at Honu`apo Park next Friday, Sept. 21. The public is invited to gather at 3 p.m. and all who attend are encouraged to wear white for a human peace sign photo at 4 p.m. The photo will be “shared with the world,” says one of the event coordinators Communication Facilitator Shary Crocker. For more info on the event, call 939-9461 or 929-7647.

ALSO SEE KAUCALENDAR.COM.AND FACEBOOK.COM/KAUCALENDAR.
Posted by The Ka`u Calendar at 12:32 PM Links to this post