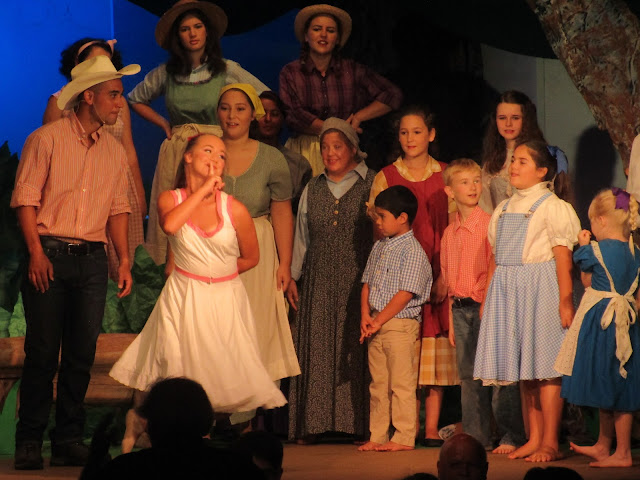 Susan the Silent (Susie Halemano) wants to share a secret with everyone in KDEN's production of
Finian's Rainbow. The show runs through July 23 at KMC's Kilauea Theatre. See below.

NATIVE KOA BURNED, along with ‘ōhi‘a in a quarter acre forest fire Tuesday behind a cabin at Nāmakanipaio Campground in Hawai‘i Volcanoes National Park. Park officials are seeking witnesses and report that the fire started behind Cabin 3 shortly before 3 p.m., and was human-caused. A female and several children told firefighters they saw how it started, but left the scene before anyone could get her name and contact information. The fire was quickly doused with water by County of Hawai‘i Engine 19, Volcano volunteer company 19, and National Park Service resources. No structures were burned, although flames came close to Cabin 3. No closures or evacuations were required.
An investigation is underway. Witnesses and anyone with information about the fire are encouraged to call Park Dispatch at 808-985-6170. Callers may remain anonymous. “With a hot and dry summer upon us, we’re definitely at an increased risk for fire in the park, and across the island,” said Hawai‘i Volcanoes National Park Fire Management Officer Greg Funderburk. “It’s important to remember that while parts of the island might be getting rainfall, other areas are very dry and quite susceptible to fire,” he said.


THE VICTIM LEFT A NOTE, Hawai`i Volcanoes National Park revealed yesterday. They identified the 38-year-old man recovered early Sunday morning near the bottom of Kīlauea caldera as Gregory Michael Ure, also known as Leo Michael Adonis, of California. His last known address was La Mesa, CA.
Park officials confirm the finding of a note in the backpack belonging to the victim. Details concerning the note and circumstances of the death will not be publicly discussed until the National Park Service has concluded its investigation and the county pathologist has ruled on the cause of death. Last Saturday, two visitors discovered a backpack on Crater Rim Trail at approximately 7 p.m. Park dispatch was notified, and rangers searched the caldera rim and floor on foot, but were unable to locate its owner. The search was suspended due to unsafe conditions at night, and resumed at dawn on Sun., July 9. Rangers aboard a helicopter found the victim about 250 feet below the caldera rim, in an area that is not currently erupting, around 5:35 a.m. Sunday.

TROPICAL STORM FERNANDA is headed toward Hawai`i and is predicted to become a major hurricane by Monday evening. Though still too far away for any accurate prediction, Fernanda is the first of this Hurricane season to take aim at the Hawaiian Islands and could enter the Central Pacific in about a week.

DRUG OVERDOSE DEATHS IN HAWAI`I ARE LOW compared to much of the United States, Hawaiʻi  ranks 43rd in the nation, the rank remaining steady over the past six years, even though drug overdose rates continue to rise across the nation.
However, drug overdose remains the leading form of injury-related deaths for Hawaiʻi residents, accounting  for 23 percent of all fatal injuries, according to the Hawaiʻi Department of Health’s Emergency Medical Services and Injury Prevention System Branch. While heroin-related overdoses are much less frequent in the state, Hawaiʻi is experiencing an increase in deaths from heroin overdoses, which mirrors the alarming national trend.
The rates include deaths from prescription opioids, and regular use of prescribed opioids can lead to dependence. This has resulted in a national epidemic of overdose incidents and deaths. 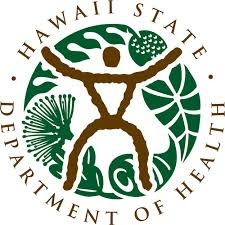 A statement on Wednesday from Hawai`i's Gov. Davud Ige says that he and the state Department of Health are  taking an aggressive approach to prevent Hawaiʻi from experiencing the same rate of opioid-related overdoses and deaths as other states. “This is a challenge that requires the best minds working together in our islands,” said the governor. “We can stem the tide by taking action now and working collaboratively across multiple state agencies to prevent harm and save the lives of Hawaiʻi’s people.” On Wednesday, he brought together heads of agencies, departments, and key partners from across Hawaiʻi to kick off this coordinated opioid abuse initiative.
Led by the state Department of Health, the group includes representatives of the Department of the Attorney General, Department of Human Services Med-QUEST Division, and Department of Public Safety Narcotics Enforcement Division. The two areas within the Department of Health facilitating this effort with the support of federal grant funds are the Alcohol & Drug Abuse Division and the Emergency Medical Services and Injury Prevention System Branch.
The newly expanded initiative includes a strategic planning session to support a comprehensive statewide plan. The group will build on policy initiatives that align with those recommended by the National Governor's Association to prepare proposals for the 2018 legislative session, said Ige.
So far, the effort in Hawai`i has achieved expanded access to drugs that can prevent opioid-overdoses (known as “opioid antagonists”) to health care professionals, harm reduction organizations, pharmacists, all first responders and any person positioned to prevent an opioid-related drug overdose mortality. Opioid antagonists are prescription medications that help to reverse the toxic effects of opioid over-medication and overdose. Laboratory research and clinical trials have also shown that opioid antagonists enhance the pain-killing capabilities of opioids, such as morphine and oxycodone.
Another hallmark is the legislature passing Act 218 to reduce inappropriate prescribing of opioids. It limits the prescribing of schedule II narcotic drugs, including schedule II opioids, except in cases where the patient is certified as terminally ill or when the single-dose packaging exceeds the limit; requires that controlled substances registrants obtain access to the Prescription Drug Monitoring Program as part of the State of Hawai`i controlled substances registration process; allows pharmacists and physicians to appoint staff members who can access PDMP information as a delegate of the physician or pharmacist delegate; broadens access to PDMP information by allowing the Narcotics Enforcement Division Administrator to give access to government regulatory agencies during joint investigations; and requires prescribing health care providers to adopt and maintain policies for informed consent to opioid therapy.
"These early successes and the work that the opioid initiative will do in the coming months will result in a comprehensive, coordinated action plan to aggressively counteract the increased abuse of opioids in Hawaiʻi," said the statement from the governor's office.

CHLOE GAN, OF KA`U HIGH SCHOOL, was one of  three  students from West Hawai`i schools to receive a $2000 scholarship from the Kona chapter of the American Association of University
Women to assist with future educational goals. The other two recipients were Neena Charles from Mauka Lani Christian Academy and Komela McAuliffe from Honokaa High School.

Gan, who graduated in 2017, loves science and will study mechanical engineering at the University of Portland. She was at the top of her class, won Best in Engineering/Environmental Science at Hawai`i District Science Fair, earned the Legislator of the Year award in youth and government, is a member of the National Honor Society, a youth mentor, and helped organize a community event that showcased local youth talent.
According to Madalyn McWhite-Lamson, coshair of the AAUW sholarship committee, Gan "is described as one of the most intellectual, sincere, and dedicated students " and also was very involved in social justice issues, participated in 4H, and was captain of the cross country team. Gan hopes to return to Ka'u and help empower youth and to improve the lives of the people around her, said McWhite-Lamson.

FINIAN'S RAINBOW CONTINUES ITS RUN at Kilauea Military Camp's Kilauea Theater through July 23rd with performances on Fridays and Saturdays at 7:30 p.m. and Sundays at 2:30 p.m. Tickets are $20 general, $15 for seniors 60 plus and students and $12 for children 12 and under, and are available at Kilauea General Store, Kea’au Natural Foods, and the Most Irresistible Shop in Hilo and at the door. For more information or to make a reservation, contact KDEN at 982-7344 or kden73@aol.com.

Posted by The Ka`u Calendar at 9:27 PM Links to this post