TODAY, FRIDAY, IS HAWAI`I STATEHOOD DAY, FORMERLY ADMISSION DAY. It is an annual holiday the third Friday of August, with public schools and state and county offices closed. Kamehameha Schools, the school for Native Hawaiians, remains open on Statehood Day.
With the hot topic of the legitimacy of the U.S. annexing Hawai`i as a territory in 1898 and Hawai`i becoming a state on Aug. 21, 1959, Statehood Day is relatively quiet with few public celebrations and is considered the first day of a long weekend of rest and recreation.
Celebrating the multiethnic fiber of Ka`u, the weekend includes the Volcano Rain Forest Runs on Saturday morning, beginning and ending at Cooper Center in Volcano Village; a spiritual retreat with native Hawaiians and Native Americans, with a lu`au and cultural celebration at Pahala Community Center on Saturday; the Ka`u High and Pahala School reunion on Sunday at Pahala Community Center,  with a potluck luncheon and entertainment open to everyone; and the traditional Bon Dance and celebration at Pahala Hongwanji, also open to everyone on Sunday evening. 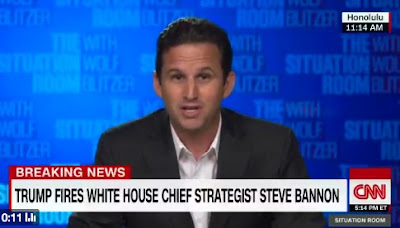 "AS A JEW, AS AN AMERICAN AND AS A HUMAN," said Hawai`i Sen. Brian Schatz, "words cannot express my disgust and disappointment at the President’s comments about Charlottesville."
Schatz was talking about Pres. Donald Trump's statements about violence and racial slurs during an Alt-Right gathering in Charlottesville, Virginia that led to the murder of a woman civil rights advocate last weekend.
Trump blamed the violence not only on white supremacists, including anti-Jewish marchers. He also blamed the civil rights advocates opposing the alt-right. His remarks drew strong criticism all week long from Republicans and Democrats and led to the resignation of business leaders, experts in arts and culture and others from Trump's presidential councils. It also led to the departure of Chief White House strategist Steve Bannon who left today to retake his post as head of the right-wing Breitbart News Network.
Today, Schatz was interviewed on CNN and said, "This is a President who has failed to do what we expect every President to do, which is to provide moral clarity and moral leadership. So in that moment, I was frankly mad and hurt as an American, as a person, as a person of the Jewish faith, that my president hadn't met even the most basic moral test. I'm not asking him to agree with me on all
the issues. I'm not asking him to be someone that I admire. I'm just asking that he understands the difference between right and wrong, the difference between Nazis and the people who protest against Nazis. So in that moment I said, what I think was on a lot of peoples' minds, which is, 'He's not acting like a President.'"
Schatz also  called for more action in Congress. He said, "My colleagues have expressed 'concern' about the president’s words and actions before, but in this new era words are not enough. The true litmus test for courage is whether or not my Republican colleagues will repudiate white nationalism and supremacy on the Senate floor, not just on social media."
Schatz also said he opposes the appointment of Sam Clovis as USDA Chief Scientist.  Clovis was co-chair of the Trump presidential campaign. Said Schatz,  "The Senate has a real opportunity to stand up against hate, when the President did not, by rejecting an unapologetic birther, Sam Clovis, from becoming the next USDA Chief Scientist. But I cannot win this fight alone. Add your name next to mine and tell the Senate to reject Sam Clovis, a non-scientist and birther, for USDA Chief Scientist.
"Here’s the truth: Sam Clovis propagated the racist lie that President Obama was not born in Honolulu. He also called Attorney General Eric Holder a 'racist black,' Tom Perez a 'racist Latino,' and suggested Obama 'wants to enslave all who are not part of his regime.'
"And he fails to meet the most basic requirement for the job, which of course is to actually be a scientist. Every single senator should easily vote against a birther and non-scientist for the Chief Scientist of the USDA. But this nomination could easily slip under the radar, so it’s up to us to make sure every senator knows their constituents are watching."

THE LONGEST LIVED AND MOST VOLUMINOUS RIFT-ZONE ERUPTION of Kīlauea Volcano in more than 500 years—the ongoing Pu‘u ‘Ō‘ō eruption—began in January 1983 and is fast approaching its 35th anniversary, This week's Volcano Watch from the USGS Hawi`i Volcano Observatory reminds the public:
So many lava flows, cones, deltas, and other features have formed from eruptions at different vents for varying periods of time that nearly every day is an anniversary for Pu‘u ‘Ō‘ō.
Last month marked the first anniversary of the 61g lava flow's entry into the ocean at Kamokuna after traveling from Pu‘u ‘Ō‘ō nearly 11 km (6.8 mi) in two months.
Three years ago this week, the infamous June 27th lava flow was erupting from Pu‘u ‘Ō‘ō and spreading steadily eastward about 300 m (330 ft) per day. On August 18, 2014, lava spilled into the first of several deep ground cracks along the East Rift Zone.
This set in motion intense scrutiny of the flow's day-to-day advance by HVO scientists, and contingency planning by Hawa‘i County and state government, businesses, and residents.
The crack system is located about 10 km (6.2 mi) northeast of Pu‘u ‘Ō‘ō. At the time, it seemed possible, perhaps likely, that the June 27th lava would keep moving northeast toward several communities in the Puna District.
On August 20, HVO scientists discussed the progression of the flow and possible scenarios with the Hawai‘i County Mayor and Civil Defense Administrator, and their staffs and other interested parties should the same active vent at Pu‘u ‘Ō‘ō continue erupting lava for weeks to months, or longer.
On August 24, the first of 28 public meetings in Pāhoa and nearby communities was organized by the Mayor's office to share information about the current eruption, status of the flow, possible scenarios based on HVO's projected lava-flow paths, and the ways in which the County, State, and others were planning to mitigate the continued advance of the flow.
On September 4, with lava advancing about 250 m/day (820 ft/day), HVO scientists estimated that the flow could reach Kaohe Homesteads subdivision within seven days—they raised the USGS Volcano Alert Level for Kīlauea Volcano from WATCH to WARNING.
These one- and three-year anniversaries of events during the Pu‘u ‘Ō‘ō eruption are but two that help the public appreciate two very different outcomes based on the interplay of several factors. These include location of the vent, robustness of lava-tube systems that develop in lava flows, slope of the ground, longevity of an erupting vent, and the variability in lava discharge from the vent day-to-day and week-to-week.
The June 27th and 61g vents are located only about 500 m (1/3 mile) from each other, but their associated lava flows spilled into different drainages that were constructed by earlier eruptions at Pu‘u ‘Ō‘ō. This resulted in the June 27th flow spreading northeastward on the north side of the rift zone about 22 km (13.7 mi), and the 61g flow spreading south of the rift zone to the ocean in only 11 km (6.8 mi).
The 61g flow has erupted for 15 months thus far, with most of the lava flowing through the tube system and entering the ocean. The June 27th lava flow was active for 23 months, but the tube system was not able to supply most of the lava to the active flow fronts for the entire time. Why not? 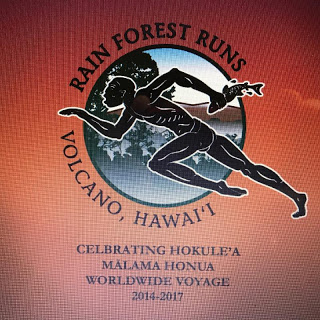 The inconsistent lava discharge from the June 27th vent and the longer than 15 km (10 mi) tube system on gentle ground both combined to interrupt or reduce, and eventually cut off lava supply to the flow fronts, thereby limiting the ultimate length of the flow. After the first four months, the flow
fronts stalled at a distance of about 22 km (13.7 mi) from Pu‘u ‘Ō‘ō, less than 1 km (0.6 mi) from Highway 130. After 9 months, in March 2015, the active parts of the flow retreated to less than 8 km (5 mi) from the vent, much to the relief of Puna residents.

A ZERO MILE  fundraising event across the Volcano Rainforest Runs Finish line on Sat. Aug. 18, will bring income to Friends of Hawai`i Volcanoes National Park. It will also celebrate the organization's 20-year anniversary. Participants can walk, roll or crawl across the finish line and receive a  medal celebrating Friends of Hawai'i Volcanoes National Park's 20 Year Anniversary.
The fundraiser takes place at Cooper Center in Volcano Village at the race place. Donations to enter are $20 for adults, $10 for those 14 and younger and free for children in strollers. CLICK HERE TO REGISTER
Friends will have a booth at the Rainforest Run/Zero Mile  with new merchandise for sale. We now have keiki sizes, including babies, along with 10 color choices. The booth will be open from 8 a.m - 3p.m.

Kahuku ‘Ohana Day: Lei Making, Sat, Aug 19, 10 a.m. – 2 p.m., Kahuku Unit of Hawai‘i Volcanoes National Park. Cultural practitioner and teacher Aolani Ka‘ilihou teaches the traditional art of Hawaiian lei making. Ascend Pu‘u o Lokuana and learn about the history of the Ka‘ū lands seen from the top. Kids 17 and under and their families sign up by Fri, Aug 11 at 985-6019.

Bon Dance, Pahala Hongwanji, Sunday, Aug. 20, with service at 4 p.. and dancing and music at 5 p.m. Food and demonstrations.

Posted by The Ka`u Calendar at 7:54 PM Links to this post