TIME OUT FOR THE PLDC is what Gov. Neil Abercrombie requested yesterday in a press release. He asked the Public Land Development Corp. to postpone its meetings and actions on pending rules while public concerns are addressed. The governor asked state Department of Land & Natural Resources chief William Aila, Jr. to facilitate meetings with stakeholders. “I do not want the potential for the PLDC to accomplish public good to be lost because of a failure to account for reservations about either the process or the outcome,” said the governor.
“We’ve heard the concerns and now need to focus on productive dialogue with stakeholders before proceeding.” According to Abercrombie,
“The PLDC has the potential to support new schools, recreational facilities and operations by using public lands for public purposes that otherwise may not have had sufficient funding. We will continue to work closely with the Legislature and all interested parties involved to do what is best for the people of Hawai`i.”
Hawai`i and Kaua`i County Councils have asked the 2013 state Legislature to appeal the law that allows the formation of the PLDC to work with private partners to develop state lands. In their opposition statements, Council members named loss of home rule and weakening of planning and environmental protection measures.
Abercrombie said, “We will do our best to alleviate public concerns; however, the PLDC is the creation of the Legislature, and lawmakers will ultimately be the ones to decide its future.”

KULANI PRISON, east of Volcano, could reopen by January for about 200 male inmates. Inmates near the end of their prison terms would be moved to Kalani, opening up other prison space in the islands for inmates who would be shipped from the mainland where the state of Hawai`i is paying for their incarceration. Sen. Gil Kahele worked with the state Legislature and Gov. Neil Abercrombie to begin planning to return the prisoners so they could be closer to their families and opportunities for rehabilitation in Hawai`i. The move would also keep the money spent on prisoners in the state of Hawai`i. The operating cost at Kulani is estimated to be about $5.3 million per year. Reopening Kulani would create 96 jobs near Ka`u’s eastern border.
The re-opening of Kulani would be a first step in returning approximately 1,700 of the 6,000 prisoners who are housed in private mainland correctional facilities.
Yesterday, the state Office of Environmental Quality Control posted a notice and a draft Environmental Assessment on its website covering the re-opening of the prison. It says that the state Department of Accounting and General Services seeks a building permit, Conservation Use Permit and Board of Land & Natural Resources approval to operate and manage a correctional facility. The location is on the developed portions of the 280 acres where Kulani Prison closed in 2009.
According to the notice, “The project involves primarily logistical actions to assemble required staff and physically transfer Hawai`i inmates. Architectural, engineering and environmental analyses in 2012 of the existing dormitories, workshops, dining facilities and administrative spaces revealed that the facility is ready for occupation by 200 inmates with only nominal repairs and no major facility upgrades.” The budget for improvements is about $600,000. “The proposed reactivation supports Hawai`i justice reinvestment initiative strategy to bring out-of-state prisoners back to Hawai`i, reduce spending on corrections and reinvest savings generated in strategies that would reverse recent crime trends,” the EA says.
“This humanitarian effort will provide increased social support for the inmates through proximity to family, friends, familiar culture, local staff and potential employment following release,” the EA states.
The EA suggests that inmates could help with rainforest conservation projects with DLNR, Hawai`i Volcanoes National Park, and U.S. Geological Survey. Facilities at Kulani include a craft building, gymnasium, automotive shop, greenhouse, piggery and pastures.
Read the EA at http://hawaii.gov/health/environmental/oeqc/index.html. Click on current issue under the The Environmental Notice. Comments are due by Feb. 7.

`AMA`AMA, STRIPED MULLET, will be out of season from Dec. 1 through March 31. The state Department of Land & Natural Resources is shutting down the season because “ama`ama are about to enter their peak spawning season, which increases their vulnerability to fishing pressure,” said DLNR chief William Aila, Jr. “The annual winter closure is designed to help the fish reproduce successfully and protect the species from overfishing.”
Fines up to $500 plus $100 for each fish taken and up to 30 days in jail can be leveled for breaking the kapu on ama`ama. Aila declared that, “while it’s DLNR’s job to protect our marine resources, everyone shares in the responsibility to take care of important fish species like `ama`ama to ensure their survival into the future.” See fishing regulations on the state Division of Aquatic Resources’ website at hawaii.gov/dlnr/dar. Report fishing law violations to 643-DLNR (643-3567).

“THE ISLAND OF HAWAI`I POSSESSES VAST UNTAPPED POTENTIAL for electricity generation from renewable resources,” says the County of Hawai`i Energy Sustainability Program Five-Year Roadmap released recently. “Estimates vary, but the total available renewable resource far exceeds current electricity demand.” The report calls for a transition from burning fossil fuels to renewables to generate electricity.
According to the report, in the past, the high capital cost of renewable technologies did not compare favorably with the relatively low prices of petroleum products. “Today, many renewable energy technologies have matured to the point that they can now compete with current electricity prices. Reducing overall electricity costs by taking advantage of the low cost of renewable electricity generation will require adding relatively large amounts of new renewables to displace existing petroleum-based generation.” 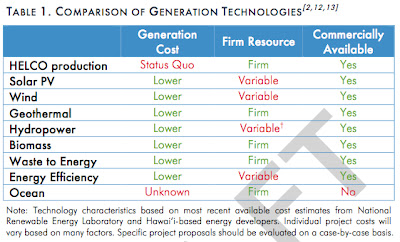 The report says that energy efficiency improvements can be viewed as one renewable energy resource “because they reduce overall demand, most of which comes from petroleum. If the residents, businesses and government of Hawai`i Island take steps now to improve energy efficiency, it could dramatically lower the overall cost of transitioning the island’s energy system to renewable sources. Energy efficiency improvements are often the most cost-effective energy investments.”
The report claims that the island’s existing petroleum-fired electric generators are only about 32 percent efficient on average, and that eliminating power generation and grid losses would reduce the island’s total energy consumption by 24 percent. Replacing petroleum-based generation with renewable generation could save some or all of the more than $120 million the island spent on fuel purchases for power generation in 2011.
“The relatively low cost of renewable electricity provides a powerful market signal, but it has not been sufficient to induce widespread adoption of renewable energy in the electricity sector,” the report states. It cites technical challenges associated with interconnecting some renewables into the current power grid, but says that these challenges “have been successfully managed in other places by investing in a modernized power grid and using existing technologies and applications to improve control and efficiency of the power system. Regulatory, policy, and financial incentive issues remain the key barriers to a full transition to renewable electricity.
“The regulatory system needs to be designed to encourage the kinds of investments required to transition the island’s energy system to sustainability. Continued policy innovation will be necessary to realize a full transformation away from petroleum dependence.”

ULTRAMAN PEDALED THROUGH KA`U yesterday, with 35 triathletes in the three-day, 320-mile swim, bike and run. Held every year over Thanksgiving weekend on the Big Island, it was founded in 1983. Day 1 on Friday was a 6.2-mile swim followed by a 90-mile bike ride with vertical climbs totaling 7,600 feet from Keauhou Bay through Ka`u to Namakani Paio Park in Hawai`i Volcanoes National Park.

Today the endurance competitors ride through Kalapana, Kapoho and Pahoa, through Hilo and up the Hamakua Coast to Waimea and to Kohala Village Inn. Tomorrow they run a double marathon from Hawi to Kawaihae and down the Kohala and Kona Coasts to Old Airport State Park. Participants include ten women. Competitors are from many countries, and the leader at the start this morning was 47-year-old Alexandre Ribeiro of Brazil, followed by Nino Cokan, 39, of Slovenia, and Miro Kregar, 50, of Slovenia.  For more and coverage, see www.ultramanlive.com

HAWAI`I WILDLIFE FUND SENDS A BIG MAHALO to the more than 85 volunteers who cleaned up three miles of Ka`u coastline from Hanalua Bay, near South Point boat ramp, to Pohakuloa Cove last Saturday. “I have never seen Pohakuloa Cove that clean, ever!” said organizer Megan Lamson.
Volunteers collected and removed 3,385 pound of debris, as well as 1,000 pounds of derelict fishing nets. Total volume collected and removed was 580 cubic feet.
Interesting finds included a mini fridge, extra large Styrofoam piece, boat hatch cover and toilet cleaner bottle from Norway.
Supporters can vote for Hawai`i Wildlife Fund in Subaru Hawai`i’s Share the Love Contest to help the nonprofit win a $5,000 donation to help care for and protect native wildlife. Log onto HWF’s facebook page at http://bit.ly/UizYSw b.
Volunteers can help load derelict nets stored at Wai`ohinu transfer station into a container on Saturday, Dec. 1. “This is a hard, hot morning and requires heavy lifting, high spirits and good balance!” Lamson said. HWF’s next beach cleanup event is on Saturday, Jan 12, most likely at Kamilo Point. For more info about either event, contact Lamson at kahakai.cleanups@gmail.com.

VOLCANO VILLAGE ARTISTS HUI Art Studio Tour & Sale continues today and tomorrow from 10 a.m. to 4 p.m. Artists display their work in several studios, and a special drawing for pieces contributed by the artists will be held tomorrow. Maps are available at local businesses and VolcanoVillageArtistsHui.com.

CHRISTMAS IN THE COUNTRY continues through tomorrow at Volcano Art Center Gallery. Art demonstrations, print and book signings by gallery artists, a selection of handcrafted decorations and gifts offered only during the holiday season are available from 9 a.m. to 5 p.m. Park entrance fees apply. For more, visit volcanoartcenter.org or call 967-7565.

ALSO SEE KAUCALENDAR.COM AND FACEBOOK.COM/KAUCALENDAR.
Posted by The Ka`u Calendar at 11:24 AM Links to this post