HAWAI`I STATE HISTORIC PRESERVATION DIVISION is getting more time to convince the administration and Legislature to fund some of its empty staffing positions and to reorganize to qualify for continued federal funding. The National Park Service put SHPD on notice that it could lose federal funding if it didn’t improve its operations which aim to protect and document Hawaiian historic sites, burials, artifacts and historic buildings representative of Hawai`i’s multi-ethnic history. The extension for the review came when National Park Service personnel cancelled their trip to conduct a weeklong review that was scheduled to begin today. The cancellation was due to sequestration – the planned $85 million in federal spending cuts to roll out over the next seven months. The review is not considered “critical travel,” which is the only travel being allowed, according to announcements by the park service.
The state Department of Land & Natural Resources chief William Aila, Jr. told Civil Beat that hiring for some of the positions that have gone unfunded by the Legislature could help the agency meet federal requirements to receive the federal funding.

SHPD was most recently involved in Ka`u in archaeological studies of Kawa lands at the beach where the county is planning to preserve sites and create a park and preserve. The agency was also involved in reviewing the findings and protection plan for burials on the Ka`u High School campus where a new community gymnasium and disaster shelter are soon to be constructed.

KA`U SCHOOLS are named as examples of educational institutions having made tremendous strides over the past several years. Ronn Nozoe, deputy superintendent of the state Department of Education, writes in Civil Beat that “the road to transformation in our public schools goes through the rural towns of Ka`u, Kea`au and Pahoa on Hawai`i Island. Just three years ago, schools in this area were among the lowest-performing schools in the state and the complex, known collectively as Ka`u-Kea`au-Pahoa, was identified as being part of the Zones of School Innovation. Today, through the hard work of dedicated teachers, principals, staff, and students all pulling in the same direction, the results are remarkable,” writes Nozoe.
“How did this complex area get there? For one, its teachers who are enthusiastic and energetic, and who work tirelessly to raise student achievement at their schools. It also took an understanding about how evaluations play a key role in success.
“Educator evaluations comprise two full-cycle observations per year. Currently they are taking place at 81 different schools, including schools at Ka`u, Keaau and Pahoa. The evaluations are based on a pre-observation, and observation, and a post-observation meeting with the principal/administrator, a Tripod student survey administered two times per year, and Student Growth Percentile calculation (annually), and a still in development Student Learning Objective, which has not yet been administered at all schools just yet. In addition, the school and complex area engages in a rigorous school improvement model (on-site school review) where teachers are required to gather evidence about their student achievement/progress and discuss them in teams on a regular basis to track overall school improvement.
“A team of observers went to each classroom twice in August, September, October and November. From December through the remainder of the year, observations are held twice a month. This year, there will be 14 informal observations per classroom; and may be done in pairs. Again, these observations are informal and NOT individually evaluative. One other fact about these observations: the principal does not ever see individual results of these observations – only at a school – or department-level,” Nozoe reports in Civil Beat.
He also explains that “standardized tests, which help gauge student achievement, are not required monthly. In fact, formative assessments used to gauge a student’s proficiency in reading and math are not standardized. Also, with the exception of the Hawai`i State Assessment test that is administered to students in third through eighth grade, and 10th graders, other tests are not standardized.
Nozoe invites parents, teachers and community members to see that “numbers don’t lie. On the Department of Education’s Accountability Resource Center Hawai`i website at arch.k12.hi.us, you can go to the ‘Accountability Data Center’ from the home page and see that the complex has practically outperformed the entire state over the last three years – especially in reading and math proficiency. In fact, these schools have accelerated the learning of students by more than a grade level. This is the kind of data that stirs enthusiasm among educators. It’s what makes educators put forth their best, and the results speak for themselves. The department believes in the evaluations as a tool for success. When teachers succeed, students excel,” Nozoe writes in Civil Beat. See more at civilbeat.com. 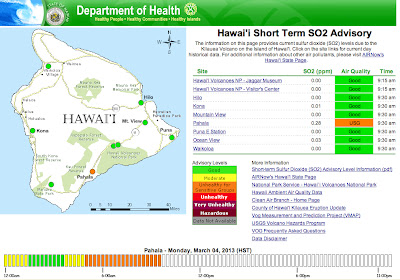 WITH THIS MORNING’S LACK OF A BREEZE, sulfur dioxide levels are in the “Unhealthy for Sensitive Groups” range, according to the Department of Health’s readings in Pahala. People in these groups, including healthy individuals with mild asthma, may experience health effects, and they may be affected at lower levels than the general public, DOH reports. Toward the upper end of this range, most asthmatics who are active outdoors are likely to experience some breathing difficulties. The general public is not expected to be affected in this range. DOH suggests avoiding outdoor activities that cause heavy breathing or breathing through the mouth. Potential health effects are not expected, however actions to reduce exposure to vog may be useful.

AT TOMORROW’S AFTER DARK IN THE PARK program, John Replogle, of The Nature Conservancy, addresses how the organization created a preserve in Ka`u and how the Three-Mountain Alliance has played an important role in this endeavor.
The Ka`u Preserve is part of the largest and most intact expanse of native forest in the state. Made up of four separate parcels of forested land, the preserve features mountainous ridgelines with narrow plateaus framed by steep valleys. A closed-canopy koa and `ohi`a forest shelters a lush understory of native ferns, where rare plants thrive, along with endangered forest birds like `apapane, `i`iwi, `elepaio, `amakihi and `akepa.
The program begins at 7 p.m. at Kilauea Visitor Center Auditorium in Hawai`i Volcanoes National Park. $2 donations support park programs, and park entrance fees apply.

HAWAIIAN AFFAIRS CAUCUS of the Democratic Party of Hawai`i holds a general membership meeting Wednesday from 6:30 p.m. to 7:30 p.m. at its headquarters in Honolulu. Ka`u residents are welcome to attend via teleconference by calling 605-477-2100. Participant access code is 697371 #.
The meeting will be conducted by Dante Carpenter, chair of Democratic Party of Hawai`i. Agenda items include a motion to ratify reorganization of HACDPH steering committee and an open election of all HACDPH steering committee members. For more information, visit hawaiianaffairscaucus.weebly.com.

HAWAI`I VOLCANOES NATIONAL PARK invites volunteers to join Stewardship at the Summit led by Paul and Jane Field. Loppers and gloves are provided for participants to cut invasive Kahili ginger along park trails. Work is often in the shade of the forest with sounds of native honeycreepers like `apapane, `amakihi and `oma`o above. Water, snacks, rain gear and sun protection are recommended.
No reservations are required. Stop by Kilauea Visitor Center to get directions and more information. The hike is a moderate one-mile round trip down Halema`uma`u Trail into Kilauea caldera, leaving from Kilauea Visitor Center. It involves walking over rough, uneven terrain on a dirt and rock path, with up to a 400-foot elevation change.
The program takes place on different days each week. This month, the dates are this Thursday, March 7; Friday, March 15; Saturday, March 23 and Thursday, March 28.
Call 985-6017 for more information.

ALSO SEE KAUCALENDAR.COM AND FACEBOOK.COM/KAUCALENDAR.
Posted by The Ka`u Calendar at 11:29 AM