TWO TOP AGRICULTURE LEADERS IN THE STATE LEGISLATURE met over the Thanksgiving weekend at Earth Matters Farm on South Point Road to listen to ideas about the future of farming in Hawaiʻi. Sen. Mike Gabbard, Chair of the state Senate Committee on Agriculture, and Rep. Richard Creagan, new Chair of the state House of Representatives Committee on Agriculture, listened to Hawaiʻi Farmers Union United members talk about the state Department of Agriculture's anemic funding.
While chefs, health and agricultural educators, and numerous policy makers name  growing food locally as an important sustainability and security goal, funding of the state ag department is less than one half of one percent (.0378 percent) of the state budget. More than 100 jobs at the state ag department remain unfilled, including inspectors that help to keep out invasive species and disease from importation. The farmers and legislators called for more funding for the ag department.

Gabbard and Creagan said they look forward to a good working relationship with Scott Enright, the chair of the state Board of Agriculture and Director of the state Department of Agriculture. They also talked about more direct funding to farmers to help control the coffee berry borer and little fire ants. Farmers talked about making more land and more education available, said Kaʻū President of the Farmers Union, Greg Smith.
Ken Love, Executive Director of the Hawaiʻi Tropical Fruit Growers, talked about Japanese government providing young farmers some $35,000 a year salary for five years to help establish farms. For greenhouses, the national government puts up 50 percent and the local prefectural governments about 20 percent for new farmers. “It shows the Japanese are really dedicated to their agriculture and to growing food,” said Love.
In Hawaiʻi, as evident at the Farmers Union meeting, said Love, “It is obvious things are starting to coalesce to elevate the level of agriculture in the state.” The three leaders in the legislature and state administration, Gabbard, Creagan and Enright, “are helping usher in a new era of agriculture in Hawaiʻi,” said Love.
Nancy Redfeather, of the Kohala Center, talked about the farm-to-school movement to allow schools to make more direct purchases of food from local farms. Making agriculture part of the curriculum from elementary school through university is a Kohala Center goal. Redfeather advocated for farmer education through schools, community groups and government.
John Replogle, a backyard farmer, who works for The Nature Conservancy, discussed the large amount of talk about raising food compared to the small amount of food actually being produced. Replogle, who grew up in Kaʻū and worked in ranching for decades, talked about making more state lands available to small farmers.

Steve Sakala, President of the Kona Chapter of Hawaiʻi Farmers Union, said keeping out invasive species and pushing them back, once here, remains a major problem. He pointed to the continuing onslaught of coffee berry borers, which likely arrived in bags of imported coffee. He also talked about truth-in-labeling efforts at the legislature to protect regional coffee brands, so buyers understand how much Kona or Kaʻū coffee, for example, is in the bag. Legislation could also require labeling to reveal the origin and amount of imported coffee mixed with the local brand.
Sakala said land security remains a big issue and pointed out that one of the most successful, largest organic operations on the island, Robb Farm, is moving to Oregon because the farmer  can’t find land security. “We need to retain the great farmers we do have. and train new farmers for the future,” Sakala said
Hemp was mentioned among the farmers who noted that other states are making great strides in growing it for fiber and other – non-marijuana uses. “We don’t want another year to get hemp permits. We want to grow this Spring,” Sakala told The Kaʻū Calendar.
Others attending the meeting included Ted Feinstein, new county administrator for College of Tropical Agriculture & Human Resources; Gabriel Howearts, of Seeds of Change; and Bob Schaffer, advocate for re-promoting recycling, mulch and efficient use of green waste. See https://hfuuhi.org.

HAWAI‘I FARMERS UNION UNITED has new grants from the state Department of Agriculture and Kamehameha Schools for trials and demonstrations for sustainable agriculture. President Vince Mina said yesterday that Korean Natural Farming practices will also be supported. Mina reported that the statewide convention, held this year at OK Farms in Hilo, will be held on Oʻahu next year, Oct. 6, 7 and 8. During the convention, the National Farmers Union is expected to deliver a charter for the Hawaiʻi Farmers Union chapter. Mina said it will mark the first new charter for a state in 17 years. The organization in Hawaiʻi has about 700 members and is the fastest growing Farmers Union in the country, he said. Mina said he is hoping for 1,000 members soon. To join see https://hfuuhi.org.

30TH ANNUAL VOLCANO VILLAGE ARTISTS HUI SHOW & SALE wraps up  today from 10 a.m. – 4 p.m., Volcano Village. Gallerygoers are invited to meet the artists in their studios located in Volcano. Artworks will be on display and available for purchase in a variety of media including pottery, raku, hand-blown art glass, sculpture, jewelry, and fiber art as well as photographs, paintings, drawings, metal work, quilts, and block prints. Maps to and galleries.
A special drawing for pieces contributed by each of the artists will be held on the final day of the tour.
For more information, call 987-3472 or 985-7487. Maps to the artists’ studios are available at local businesses and galleries in the Volcano and at: www.VolcanoVillageArtistsHui.com. 987-3472987-3472 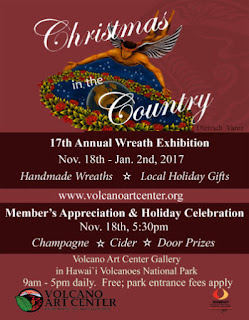 CHRISTMAS IN THE COUNTRY holiday exhibit daily through Jan. 2 from 9 a.m. – 5 p.m., at  Volcano Art Center Gallery in Hawai‘i Volcanoes National Park. Featured at Christmas in the Country is the 17th Annual Invitational Wreath Exhibit, with prizes awarded for the best wreaths. To participate, contact Emily Weiss at 967-8222 or gallery@volcanoartcenter.org. Free; park entrance fees apply.

REGISTRATION IS OPEN FOR THE UNIVERSITY OF HAWAI‘I VULCAN VOLLEYBALL CLINIC to be held this Thursday, Dec. 1 at the new Kaʻū District Gym. The clinic,  from 5 p.m. to 7 p.m. is for youth five to 14 years of age. The clinic is expected to feature Vulcan and Trojan volleyball star Marley Strand-Nicholaisen and other Vulcan players who just finished their season.
All participants must have a parent sign the Dept. of Parks & Recreation release of claims form and the HI-PAL permission Release Form. Court shoes or rubber sold shoes are required. To register, call Pāhala Community Center at 928-3102 or 854-7316. Community police Officer Blaine Morishita is also helping through the Hawaiʻi Isle Police Activities League and can be reached at 936-7192.
DEADLINE FOR THE ALYSHA & PETE 3-ON-3 BASKETBALL WINTER JAM is this Friday, Dec. 2. The tournament will be held at the new Kaʻū District Gym, Dec. 9-11 with opportunities for adults and youth of all ages. Age groups are ten and under, 12 and under, 14 and under, boys, girls and co-ed. Men and women are also invited to compete. Cost is $10 per person with five players maximum per team. The tournament raises money to help fund Trojan Senior basketball players Pete Dacalio and Alysha Gustafson to travel to the mainland with coach Jen Makuakane to look at colleges who may provide them with sports scholarships. To sign up or donate, call Summer Dacalio at 498-7336, Pete Dacalio at 498-3518 or Alysha Gustafson at 339-0858
To read comments, add your own, and like this story, see Facebook. Follow us on Instagram and Twitter.

PĀHALA’S CHRISTMAS PARADE welcomes community groups, churches, sports teams coffee farmers, classic vehicle drivers and more to travel through the village on Sunday, Dec. 11. The parade, in its 38th year, travels through the streets of Pāhala, with Santa and his helpers handing out candy to kids. A traditional stop is Kaʻū Hospital where long term patients come outdoors to see the decorated trucks cars and floats, marching groups and costumed characters.
Participants begin gathering at the old Pāhala Armory at noon and the parade starts at 1 p.m. The parade ends at the Catholic Church on Pikake Street for refreshments. Organizer for almost four decades is Eddie Andrade. For more information, call Andrade at 928-0808.


SUPPORT OUR SPONSORS AT  PAHALAPLANTATIONCOTTAGES.COM AND KAUCOFFEEMILL.COM. KA`U COFFEE MILL IS OPEN  SEVEN DAYS A WEEK.

Posted by The Ka`u Calendar at 5:43 AM Links to this post