MISUNDERSTANDINGS ABOUT THE `AINA KOA PONO proposal were discussed at the public meeting this week in Pahala held by Hawai`i Electric Light Co. When community members talked about adding trucks to Hwy 11 to deliver biofuel from the proposed refinery along Wood Valley Road to the power plant in Kona, electric company officials pointed out that the trucks would not add onto the trucking on Hwy 11. They said the biofuel trucking would replace trucking of fossil fuel no longer needed. The current truck route for the fossil fuel is up Hamakua Coast from Hilo and down the Kohala Coast to the power plant at Keahole, near Kona airport.
When asked about comparing cost of fossil fuel with the proposed cost of the proposed `Aina Koa Pono biodiesel, estimated at $200 a barrel, electric company officials said the diesel and oil prices are hard to compare. Fossil fuel is less than $100 a barrel but different than diesel. They referred the question of how to compare diesel to fossil fuel costs to `Aina Koa Pono.

EARL LOUIS, who supports preservation of culture and lands in Ka`u, said that instead of biofuel, the electric company should pursue more geothermal.

LARRY JOHNSON, an environmental scientist who lives in Alaska and Pahala, said the bad news is that Hawai`i uses a higher percentage of petroleum to make electricity than any other state. He said Hawai`i’s dependence on petroleum products for electricity generation is now 59 percent, six time higher than the next state using the most petroleum for electricity.
“That’s the major reason Hawai`i’s rates are so much higher than anyone else.” He said the good news is the abundance of renewables available, from wind to geothermal, hydroelectric to solar and perhaps biofuel.
Johnson said the most efficient and economic way to reduce energy costs is conservation. He pointed to Hawai`i Energy, an entity that educates the public and provides funding for conservation initiatives. He said Hawai`i Energy has made progress but is a long way from achieving significant conservation. He said conservation would reduce costs to the consumer and save HELCO money over the long run.
Biofuel is the most problematic of the renewable energy options, Johnson said, contending that biofuel operations have the most difficulty staying financially viable worldwide, as well as many technical problems.
He also pointed out that from an environmental standpoint, biofuels only make sense if they produce more energy than they use. He said that `Aina Koa Pono promised a "Wells-to-Wheels" energy analysis almost two years ago and has still not provided it.
Johnson suggested the utility should plan redundancies, not only in the kinds of renewable energy, but also in geographic locations. One example would be locating new geothermal at a distance from current Puna geothermal so if one energy source goes down during a natural disaster, the other can take up the slack. He said the same kind of geographic redundancy would be wise for hydroelectric and wind.

MARION GERUSCHAT asked Consumer Advocate attorney Jon Itomura whether she understood the proposed `Aina Koa Pono business model. She said she wanted to know if she is correct in thinking that it would lock in a price for 20 years that is higher than fossil fuel now, expecting the fixed biofuel price to become lower than fossil fuel as the cost of oil rises. She indicated that anyone would be happy to have the privilege of locking in a fixed price they could charge customers for 20 years. She also asked the Consumer Advocate attorney to state “for or against the biofuel.”
Itomura pointed out that the Public Utilities Commission rejected the first `Aina Koa Pono proposal  last year. Even though the Consumer Advocate recommended approval, the agency had strong reservations, he said. Itomura said concerns remain and that the `Aina Kona Pono proposal would need to be different this year to gain support.
The proposal would still raise electric bills for all ratepayers on O`ahu and the Big Island.
The community can give input to HELCO regarding its long-term planning by emailing comments to public@irpie.com. Electric company officials promised that testimony will be posted at www.irpie.com, where interested persons can also read long-term planning documents as they are developed by the electric company.

THE PAHALA COMMUNITY CEMETERY BLESSING was held yesterday with flowers on every marked and unmarked grave. Pastor Ron Ebert led the ceremony under the shade of an opium tree along rock walls that were newly built and renovated that define the graveyard along Hwy 11. The cemetery on Pahala Plantation Cottages land was formerly cared for by the Lions Club and was recently cleared and is cared for by `O Ka`u Kakou. The renovations involved clearing brush and putting down a gravel covering, as well as new signage. In addition to the cemetery with many unmarked graves, there is a Chinese cemetery which was also cleaned up with volunteer help from `O Ka`u Kakou. Donations of money, time and equipment came from many organizations, including Edmund C. Olson Trust, Island Rock Masonry, Ka`u Andrade Contracting and Taylor Built Construction, Inc.

HAWAI`I COMMUNITY FOUNDATION has awarded $437,000 in grants to nine projects across the islands aimed at the protection and restoration of Hawai`i’s coastal areas. Funding for the projects is made possible through a three-year partnership between HCF, National Oceanic and Atmospheric Administration’s Restoration Center and Harold K.L. Castle Foundation.

Since 2009, the partnership has provided more than $1.5 million in funding to community organizations repairing fishponds, removing invasive species and preventing polluted runoff in coastal waters on all major Hawaiian islands.
“In Hawai`i, clean water and healthy lands are fundamental to our quality of life,” said Josh Stanbro, director of Environment and Sustainability at the HCF. “We commend these community groups for taking responsibility in their own backyards, and putting in countless hours to protect our most treasured sites.”
Specific goals for the partnership include restoration of coral reef habitat, coastal wetlands and estuaries, traditional coastal fishponds, riparian zones/stream habitat and land-based sources of pollution mitigation.
Coastal habitats support approximately 25 percent of Hawai`i’s reef fish, 32 percent of marine invertebrates, and 90 percent of stream animals that are found nowhere else on the planet.

STATE REP. RICHARD ONISHI continues public meetings to gather input about residents’ concerns and issues that he can take to the state Legislature. Tomorrow’s meeting at Pahala Community Center is from 7 p.m. to 8 p.m. Another meeting takes place Monday at 7 p.m. at Kea`au Community Center. Onishi’s contact number is 586-6120.

KA`U COMMUNITY DEVELOPMENT PLAN Steering Committee holds a business meeting Tuesday at 5:30 p.m. at Na`alehu Community Center. The two business items on the agenda are an update on CDP production and an orientation to the CDP background analysis. Public comment on agenda items is always welcome and encouraged. Planner Ron Whitmore has issued a list of Ka`u Hot Topics that are not on the agenda and will not be discussed. Hot Topics include `Aina Koa Pono Biofuels Facility, Kawa Stewardship Plan, Kawa Drainage Environmental Assessment, Ka`u Forest Reserve Environmental Assessment, Kahuku Village, Pohue Bay, Road to the Sea, Ocean View Water System and Ocean View Transfer Station. For more information, contact Whitmore at 961-8137 or rwhitmore@co.hawaii.hi.us.

MAUKA LEGEND HUNTING TOURNAMENT is happening today. Weigh-ins are from 1 p.m. to 5:30 p.m. at Old Pahala Clubhouse. This family-friendly event in memory of Chaz Moses, whose favorite pastime was hog hunting, includes live entertainment and food.


CHRISTMAS EVENTS THIS WEEKEND include a concert by Volcano Festival Chorus tonight at 7 p.m. at Kilauea Military Camp Theater in Hawai`i Volcanoes National Park. The concert is free, and park entrance fees apply. 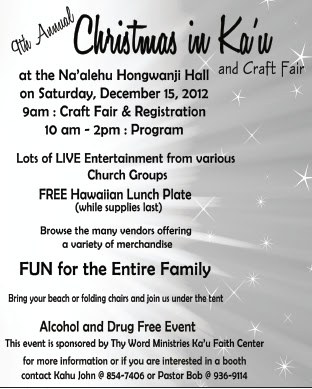 PAHALA CHRISTMAS PARADE is tomorrow at 1 p.m. All community groups and businesses are invited to participate. Call 928-0808 to sign up.

FIND MORE OF OUR DECEMBER 2012 EVENT PHOTOS ON OUR FLICKR ACCOUNT.
Posted by The Ka`u Calendar at 12:24 PM