HAWAI`I VOLCANOES NATIONAL PARK reopened at 6 a.m., following yesterday's U.S. Senate and House of Representatives’ vote and Pres. Barack Obama’s signature to fund the federal government. Visitors can access public areas and roads immediately while facilities and other public services are brought back online. Hawai‘i Volcanoes National Park had been closed since Oct. 1 due to the government shutdown.

“We are all eager and excited to reopen and welcome visitors back to the park,” stated Park Superintendent Cindy Orlando. The following areas in the park are open:
Roads: Chain of Craters Road and all scenic overlooks are now open. Crater Rim Drive is open, except for the section closed since 2008 due to volcanic fumes.
Features: Thurston Lava Tube, Steam Vents, and the Jaggar Museum observation deck overlooking erupting Halema‘uma‘u Crater are now open.
Visitor Centers and Programs: Kīlauea Visitor Center opened at 8:45 a.m. today, the Jaggar Museum opened at 8:30 a.m., and ranger-led programs will resume as quickly as possible.


VOLCANO ART CENTER GALLERY reopened this morning, with 9 a.m. to 5 p.m hours, inside Hawai`i Volcanoes National Park. The Art Center, along with concessions inside the park, were forced to close Oct. 1 with the federal shutdown. Gallery employees were furloughed. Volcano Art Center Chief Executive Officer Tanya Aynessazian said, “We are glad to put people back to work but it will probably take several weeks to ramp up and start recovering losses,” as the park returns to a regular visitor count. She said the shutdown was not only a loss to those working at the gallery and visitors but also to the many local artists who depend on the gallery sales to make a living. Aynessazian said that she hopes that Congress will be able to prevent another shutdown at its next government funding deadline, “which is in the peek of our busy season.”

Now showing at Volcano Art Center Gallery are the acrylic and oil paintings of Reyne Ojiri, a native of Hilo. Called Island Inspired, the exhibit shows through Oct. 27.
In addition to reopening, Volcano Art Center is raising money to make up for the losses. Call Aynessazian at 967-8222.
To comment on or “Like” these stories, go to facebook.com/kaucalendar.

REGULATION OF GMO crops moved a step closer to becoming law yesterday, as the County Council passed a bill on first reading with a 6-2 vote.
According to a story by Tom Callis in this morning's Hawai`i Tribune Herald, the vote prompted the audience to "erupt in applause with repeated shouts of  'Bravo.'" To become law, the bill restricting Genetically Modified Organisms needs another round of voting by the council and Mayor Billy Kenoi's signature.
The bill contains an emergency exemption that would allow farmers to choose GMO crops to fight such problems as disease. Ka`u council member Brenda Ford called it a loopholine, saying "I think it dramatically weakens the bill," the Hawai`i Tribune Herald story reported. "The legislation, while not banning all transgenic crops, is intended to limit their spread on the Big Island. The isle has the most agricultural lan in the state but has not been selected by biotech companies to host seed farms as seen on Kaua`i, O`ahu and Maui, County," Callis reported.
According to the story, papaya business representative Eric Weinert, of Calavo Growers, said he would file a law suit challenging the bill, if it passes. See more at www.hawaiitribune-herald.com. To comment on or “Like” these stories, go to facebook.com/kaucalendar.

U.S. REPRESENTATIVE TULSI GABBARD has commented on the agreement to restart the federal government. "Finally, Democrats and Republicans in the House and Senate are doing what's necessary to get our country back on track." Ka`u's member in congress noted that yesterday she joined Republican Rep. Aaron Schock on MSNBC’s The Daily Rundown. "Even though we're from different political parties, we understand we have a responsibility to work together to move our country forward for the good of our next generation – not just treading water as we deal with repeated short-term, unnecessary crises. There’s a growing chorus of voices who are determined to work together," she said.
In a segment called How the center can change politics, Gabbard was presented as a member of the political center, a leader in the Congressional Future Caucus. She said the 13 members of the caucus comprised of Republicans and Democrats "can provide kind of a game changer to do things better so that we are not constantly having to dig ourselves out of a hole or play defense."  She talked about being responsible in governance  but also encouraging growth and innovation in government and the economy.
When the MSNBC host said he was "beaten down by congress," Gabbard said, "Aloha!" and he replied,  "You are always smiling because you are from Hawai`i." See the MSNBC video at http://www.msnbc.com/the-daily-rundown/watch/how-the-center-can-change-politics-54510147546

THE ANTI FRACKING BILL, authored by Ka`u County Council member Brenda Ford, was unanimously passed Wednesday by the County Council and goes to Mayor Billy Kenoi for his signature.

Hydraulic fracturing and hydro fracturing, also called fracking, injects fluids into the ground under high pressure to fracture rock. On this island, it could be used to release water and steam from geothermal sources. On the mainland and in Europe, where it is controversial and banned in some places, it is mostly used to release natural gas and oil. Water is mixed with sand and chemicals and is blamed for contaminating drinking water sources.
Ford said she is not against geothermal, but is concerned with contaminating groundwater with chemicals used to drill and frack for geothermal resources. Geothermal uses water heated by the volcanoes on the island to run turbines to make electricity. While fracking can also be used to find and develop potable water sources, the county Department of Water Supply does not and refuses to use fracking, Ford said.  Several places in Ka`u are considered possible locations for geothermal.  To comment on or “Like” these stories, go to facebook.com/kaucalendar.

NEW SCENIC BYWAY SIGNAGE AT Mile Marker 75 on Hwy 11 will be blessed on Wednesday, Oct. 23 at 4 p.m. The Ka`u Scenic Byway Committee of the Ka'u Chamber of Commerce will celebrate completion of its first project, installation of Wayside Signs at the Scenic Point just south of Ocean View on Mamalahoa Highway. One of the two signs tells The Story Behind the Scenery, with focus on geology and reference to local history. The second describes Plant Regrown on New Lava and points out contrasts between older, vegetated brown lava and new, relatively bare black lava.
Ka`u Civic Club President Blossom DeSilva is making her own signs directing the public to the blessing. For more information, contact Marge or Dennis Elwell at 929-7236. They will also give a presentation at the Ocean View Community Association Pancake Breakfast this Saturday, Oct. 17. It begins at 7:30 a.m. To comment on or “Like” these stories, go to facebook.com/kaucalendar.

KA`U TROJAN GIRLS VOLLEYBALL moved forward in the Big Island Interscholastic Federation playoffs by beating Honoka`a Dragons in a home game last night. Scores for the game were 25-14, 25-16, 25-14. The Trojans take on Hawai`i Preparatory Academy at Kamehameha School tomorrow, Friday at 4 p.m. in Kea`au. To comment on or “Like” these stories, go to facebook.com/kaucalendar.

HAWAIIAN CIVIC CLUB MEETS tonight at the Na`alehu Methodist Church at 6:30 p.m. President Blossom DeSilva said the organization will discuss recent donations to its scholarship fund. "The educational committee is doing an awesome job in reaching their goal," she said. The group will also talk about its recent participation in the Ka`u Plantation Days and its goal to increase membership. For more information, call De Silva at 929-9731.

MAKE YOUR OWN WORM FARM is a workshop at the county Kahuku Park in Ocean View, tomorrow, Friday at 3 p.m. The program is free. Call 929-9113. 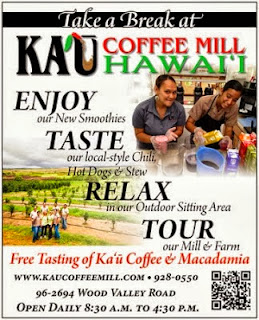 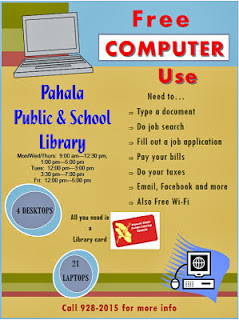 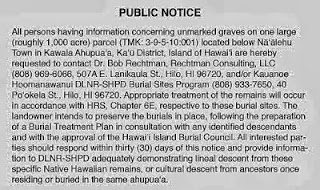 Posted by The Ka`u Calendar at 1:53 PM Links to this post