FRESH FISH are the pride of Ka`u kitchens and fishermen, but contamination by mercury could be a growing concern, according to new research by University of Hawai`i scientist Brian Popp. Popp is a professor at U.H.-Manoa, specializing in geophysics and geology. His study, in collaboration with University of Michigan, was published this week by Nature Geosicences Journal.
It states that much of the mercury in Pacific Ocean going fish, like ahi, ono and opah, apparently comes from air pollution from coal-fired factories in China, India and other Asian countries where industrialization is rapid. As industrialization increases, the mercury is expected to continue rising in the Pacific. The trend is counter to mercury in the Atlantic, which is declining with stricter emissions standards in Europe and the U.S. Other mercury sources from such events as big wildfires may be more frequent with global warming.

How does the mercury get into the fish? The mercury rises from the factories and fires and is carried by the wind until it falls onto the ocean surface or comes down during rain. In the water the mercury is consumed by plankton, which are eaten by small sea creatures, small fish and larger fish, up the food chain. By the time they are caught by fishermen, the concentrations can be so significant that health departments recommend eating ahi, ono and opah only once in every two weeks. Health departments also recommend limiting the consumption of mahimahi, skipjack tuna, grouper cod and canned tuna to no more than once a week. Shark, marlin and swordfish are also on the warning list, particularly for pregnant women who are warned not to consume them at all.
It was a 2005 University of Hawai`i research project that showed island women with three times more mercury in their umbilical cord blood after delivering babies than women giving birth on the mainland.
The U.H. study of the mercury in local fish measured mercury isotopes in nine species caught in Hawaiian waters— swordfish, mahimahi, opah, and skipjack, bigeye and yellowfin tuna. It also examined two kinds of lanternfish and flying fish. The readings linked mercury in the fish to the air.
A story in the Los Angeles Times this morning reported: “That doesn't mean people should avoid fish, which is also one of the more healthful meal options a person can choose, health officials said. ‘Everybody's going to get exposed to it,’ Alfred E. Asato, a chemical response laboratory coordinator with the state Department of Health, said Tuesday of mercury.”
“Over decades ‘it's almost impossible to isolate a single toxic element with all the diseases,’ he said. ‘There are so many potential causal effects, causations for the various symptoms of diseases.’"
Another aspect of the study found a higher concentration of mercury in fish living in deeper water than surface fish. It concluded that sunlight destroys 80 percent of mercury near the surface, leaving the mercury that sinks below the surface for the deeper living fish to consume.
The scientists concluded that the way to control mercury in the Pacific is to call for industrializing countries to enact and enforce stricter air pollution laws. See more research at www.nature.com/nego.

FINANCIAL DISCLOSURE REQUIREMENTS have led a salary commissioner for Hawai`i County to resign, according to a story yesterday's Honolulu Star Advertiser. Gloria Wong told the reporter that “she’d never before been required to disclose information about her income, stock ownership or other financials,” the newspaper reported.
The story said she served on boards on O`ahu that did not require such disclosures. Star Advertiser reported her saying, “You see a lot of vacancies on these boards. Why do people not sit on these boards and commissions? Maybe that’s one of the questions that should be asked.”
The story pointed out that Hawa`i County has 35 active boards and commissions and that several of them “often cancel meetings for lack of a quorum, and Mayor Billy Kenoi finds himself recycling members from board to board to fill holes.” Kenoi, however, “ has seated more than 220 people during is term,”  the story reported. See more at www.staradvertiser.com

HOLDING JUVENILE OFFENDERS accountable for their actions, while reducing costs to Hawai`I taxpapers is a new public safety effort by Gov. Neil Abercrombie, Hawai`i Chief Justice Mark Recktenwald, state Sen. President Donna Mercado Kim, and state Rep. Mele Carroll.
They formed a bipartisan, inter-branch working group to analyze the state’s juvenile justice system and develop data-driven policy recommendations for the 2014 Legislature.
“It costs a tremendous amount of money to put juvenile offenders into state custody,” Abercrombie said. “We need to take a hard look at our data, find better outcomes, and identify more cost effective ways to handle our juvenile offenders.”
Many of the youth suffer from substance abuse addiction, mental health issues and family dysfunction. A significant number are in custody due to the lack of accessible treatment services and programs, especially on the neighbor islands, said a joint statement from the group.

Each commitment placement costs taxpayers more than $190,000 per year, per youth (averaging 60 youth per year). Despite this substantial cost, the majority juvenile offenders who exit the state’s correctional facilities reoffend and return within three years, the statement reports.
“With the amount of money we spend locking up each juvenile offender and the high recidivism rates, it is clear we are not getting an adequate public safety return on our juvenile justice investment,” said Carroll, chair of the House Human Services committee. “We must focus our correctional resources on serious offenders who pose a public safety risk and we must stop the cycle of recidivism for youth who want to turn their lives around. We must also do a better job for our youth on the neighbor islands who are being sent to Honolulu due to a lack of resources in the other counties.”
Last year, Hawai`i enacted comprehensive criminal justice legislation with the goal of improving public safety while keeping costs in check. Act 139 (SB2776) and Act 140 (HB2515) were designed to lower recidivism, increase efficiency in the adult criminal justice system, and hold offenders accountable to victims for their crimes.
According to the statement, the new laws have shown encouraging results, with a 5 percent drop in prison population. “Building on the success of this effort, known as the Justice Reinvestment Initiative, Hawai`i will use the same data-driven and evidence-based process to analyze the juvenile justice system and further maximize its public safety investments,” the statement promises.
The working group will receive technical assistance from The Pew Charitable Trusts’ Public Safety Performance Project. Pew and its partners have provided similar assistance to more than two dozen states, including Arkansas, Georgia, Kentucky, Oregon, Texas and Vermont.

FUNDRAISING FOR EIGHT-MAN FOOTBALL at Ka`u High School continues with the sale of tickets for combo plate lunches with Korean Chicken/Teri Beef with a side of rice, mac salad, cake and water for $10. tickets are available from the players, coaches and parents. The chef is the coach, Kainoa Ke, known for his excellent cooking. Beef was provided by Kahua Ranch.
Pick up is this Saturday, Aug. 31 from 10 a.m to 2 p.m. at Na`alehu Ace Hardware. Donna Masaniai is taking phone orders at 238-0505. The team is raising $11,000 to travel to Moloka`i to play the Farmers on Oct. 5. Ka`u's first game is Friday, Sept. 6 at 6 p.m. against Seaberry Hall from Maui. On Sept. 20, Kealakehe Waveriders come to Ka`u wiht a 6 p.m. kickoff. On Saturday, Sept. 28 Kamehameha Warriors host Ka`u. On Friday, Oct. 25, Trojans travel to Kealakehe and on Friday, Nov. 8, Moloka`i Farmers come to Ka`u for  the Trojans' Homecoming and Senior Game night. 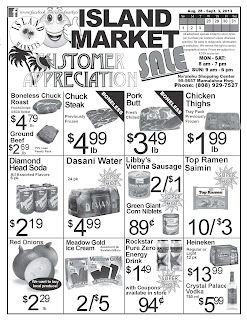 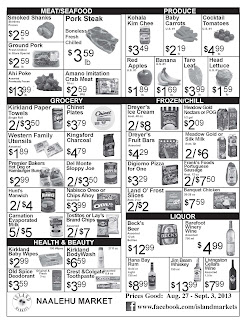