MOLOKA`I ON OCT. 5 is the destination for Ka`u High School’s 18 players who are signing up to help launch an eight-man football league for the small high schools on this island. Fundraising has already started, according to Ka`u High athletic director Kalei Namohala. 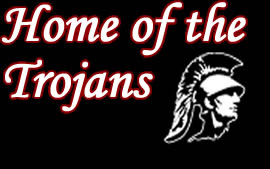 The first school to offer to host Ka`u, Moloka`i High, is already a member of an eight-man football league in Maui County. Ka`u could lead the charge to create a league here, perhaps with such schools as Pahoa, Kohala and some private institutions. Three schools can make a league, and three leagues, perhaps one on O`ahu, one on Hawai`i Island and the existing Maui County league, could create a state championship playoff. Eight-man football, Namohala noted, is particularly appropriate for fast-running athletes and shows off passing and interception skills. There are fewer tackles in the game. It is higher scoring with fewer injuries.
Ka`u was forced to drop out of full-blown 11-man football when fewer than 30 members signed up to play this year. Thirty is the required minimum for Big Island Interscholastic Federation 11-man football play. Further complicating Ka`u continuing with 11-man play is the risk of weathering fines of $1,600 per each away game should Ka`u be unable to come up with enough players. Reductions in players usually comes from injuries, which are more likely with a small team playing both offense and defense. It can also come from players unable to meet academic standards.
Anyone wanting to donate to the effort to continue Ka`u Trojan football can call the athletic director at 928-2012.

AFTER RECEIVING LAST WEEK’S FINAL ROUND OF TESTIMONY, the state Public Utilities Commission has set next Thursday, Aug. 15 as the deadline for parties and participants to notify it of their next courses of action regarding the proposed 20-year contract for the electric companies to purchase biofuel that would be manufactured by `Aina Koa Pono at a refinery that would be built off Wood Valley Road. AKP plans to use feedstock from existing trees and brush it would harvest on land between Pahala and Na`alehu, plus grasses it would grow to feed the microwave units that would be installed at the $400 million refinery.
The Commission gives Hawai`i County, Life of the Land, the state Consumer Advocate and the state Department of Business, Economic Development and Tourism three options. The first is to resolve substantial disagreements with the utilities by stipulation. Such an agreement is designed to simplify or shorten litigation and save costs.
The second is to propose an evidentiary hearing schedule. “If a party or participant states its intent to propose an evidentiary hearing schedule, said party or participant shall clearly explain by supporting legal argument its right to an evidentiary hearing,” the Commission stated.
The third choice is for the parties and participants to let the Commission know that they are ready for the Commission to make a decision.
See hawaii.puc.gov for more. Docket number is 2012-0185.
To comment on this story or “Like” it, go to facebook.com/kaucalendar.

PRESIDENT BARACK OBAMA HAS NAMED the late Sen. Daniel Inouye as one of 16 recipients of the Presidential Medal of Freedom, the Nation’s highest civilian honor. The award is presented to individuals who have made especially meritorious contributions to the security or national interests of the United States, to world peace, or to cultural or other significant public or private endeavors.
This year marks the 50th anniversary of the executive order signed by President John F. Kennedy establishing the Presidential Medal of Freedom, as well as the first ceremony bestowing the honor on an inaugural class of 31 recipients. Since that time, more than 500 exceptional individuals from all corners of society have received the award.
“It is an honor for all the people of Hawai`i that President Obama has chosen to award Sen. Inouye with the Presidential Medal of Freedom for his extraordinary public service, bravery and heroism,” Sen. Brian Schatz said. “There is no better way to recognize Hawai`i’s lion in the Senate than with our nation’s highest civilian honor. This is an occasion of great pride for everyone in the 50th state and across our great country.”
Find out more at whitehouse.gov.
To comment on this story or “Like” it, go to facebook.com/kaucalendar.

HALAU HULA O LEIONALANI is reaching out to the Ka`u community to help carry the hula sisters to Lana`i’s cultural festival in October. The halau of Native Hawaiians from Ka`u practices at the Old Pahala Clubhouse and is a regular participant at the Ka`u Coffee Festival each year, hosting dancers from the other islands and Japan to celebrate Ka`u coffee.
Kumu hula is Debbie Ryder, who became a kumu under the tutelege of the late George Naope. One of the signature hulas of the halau, which they will dance on Lana`i, is Naope’s composition Ka Nani a o Ka`u.
Members of Halau Hula O Leionalani are Jamie Kailiawa, Jannalynn “Nani” Kaleohano, Keisha Enitan, Justie “Mona” Wroblewski, Krystalynne Gascon, Kamalani Reyes, Teresa Souza, Kavelle Silva, Amery Silva, Tommy-Jean “TJ” George and Jerilynn Pua.
To reach Lana`i, the hula sisters must raise money to take the direct flight from Hilo to Kahalui, Maui, the Speedy Shuttle to Lahaina and the ferry to Lana`i. Dinners and accommodations will be provided on Lana`i. The halau is on its own for breakfasts and lunches for the four days on the island. In addition to performing, the halau will walk up Mauna Lai, Lana`i’s only valley where taro is grown, and participate in a chanting ceremony in the nearshore waters, similar to the ceremony held at dawn at Punalu`u during Ka`u Coffee Festival week this year. Mona Chow has volunteered to make lei for the halau to carry to Lana`i.
To donate, call Keisha Enitan at 339-2423 or 937-7189. The halau is having fundraisers, currently pre-selling tickets for bread from Kamuela – Vierra’s Best Sweetbread – for $7.50 a loaf and Vierra’s cinnamon bread for $8.00 a loaf. See one of the halau members.
To comment on this story or “Like” it, go to facebook.com/kaucalendar.

FRIENDS OF HAWAI`I VOLCANOES NATIONAL PARK presents its monthly Walk in the Park tomorrow from 9 a.m. to 1 p.m.
Volcanologist Cheryl Gansecki guides a four-mile, round-trip hike along Footprints Trail to Mauna Iki in the Ka`u Desert. The hike is free for Friends members, and non-members can join the organization in order to attend. Call 985-7373 or email admin@fhvnp.org.

THE PUBLIC IS INVITED TO SUBMIT TESTIMONY regarding a proposed pipeline to carry water from Old Plantation Spring for ag use at a public hearing Monday at 5 p.m. at Na`alehu Community Center. The Conservation District Use application is available for review at Na`alehu Public Library and at hawaii.gov/dlnr/occl/meetings. 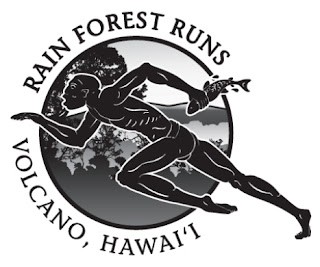 THE FOURTH ANNUAL VOLCANO RAIN FOREST RUNS are a week from today. The half marathon, 10K run and 5K run/walk are held in Volcano Village. This event traverses the native rain forest in Volcano Village and the ranches near Hawai`i Volcanoes National Park. All distances are open to runners and walkers of all ages and abilities. The event is a fundraiser for Volcano Art Center and its educational programs.
Entry fees are $85 for the half marathon, $50 for the 10K run and $35 for the 5K run/walk.
$500 in athletic equipment can be won by the Ka`u school who sends the most competitors to the event. The equipment can be for track, cross country, volleyball, tennis, football, soccer – any sport. The school with the most students represented wins the $500 gift certificate from Sports Authority.
Competitors can enter any of the races to qualify their schools, which can be elementary, middle or high school. Registration fee is $20 per entry.
Registration is available at rainforestruns.com.

OCEAN VIEW EVANGELICAL CHURCH’s first community ho`olaule`a is one week from today on Saturday, Aug. 17 from 10 a.m. to 2 p.m. The lu`au will include lomi lomi salmon, chicken and long rice, kalua pig and beverages.
Organizer Mary Wheeler is asking for monetary donations and door prizes. “We will help meet community needs, while getting the opportunity to serve,” she said. For more information and to donate, call 990-3480.

THERE IS STILL ROOM IN THE EVA LEE WORKSHOP on tea cultivation and production Sunday, Aug. 18 from 3 p.m. to 5 p.m. at Pahala Plantation House. The program is for prospective tea growers on Hawai`i Island interested in growing the specialty crop Camellia sinensis tea, producing white, green, oolong and black tea. The purpose is too help individuals and small family farms make greater strides in community production. The program is sponsored by The Kohala Center and funded in part by the U.S. Department of Agriculture Co-op Support program. To sign up, call Julia Neal at 928-9811. See more on Eva Lee at teahawaii.com.

KA`U PLANTATION DAYS will be held on Saturday, Oct. 12 at the old Pahala Plantation Managers House with a parade on Pikake Street. Organizers of the third Ka`u Plantation Days chose this year’s theme to be Together Again. The parade will feature horses and riders representing each of the Hawaiian Islands. Both horse and rider will wear lei. A sugar truck representing the last run from the plantation fields to the old mill, which was located across from the manager’s house, will be driven from Pahala Armory to the manager’s house, tooting the horn familiar to everyone who lived in Pahala during sugar days. The parade, followed by festivities, will begin at 9 a.m. There will be ethnic dance and displays from the various communities making up the multiethnic fabric of Ka`u. The sponsoring organization, Ka`u Multicultural Society, plans “a day filled with entertainment, ono food, music and most of all sharing those memorable moments back in time. Bring all of your family and friends to watch the parade, exchange stories, having laughter and establishing additional memories,” says the new flyer for the event. For more information, to donate, sign up for a display or booth, call Darlene Vierra at 640-8740. 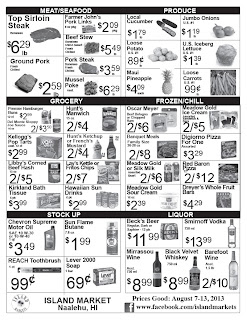 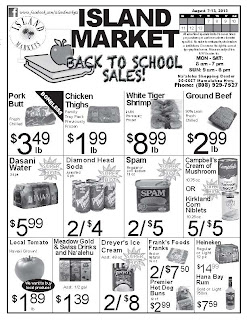 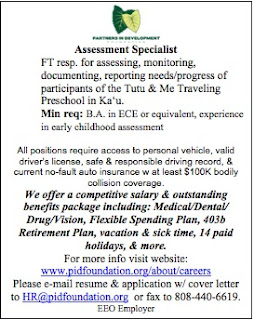 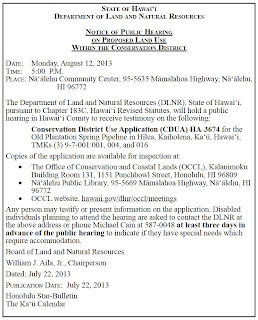 Posted by The Ka`u Calendar at 11:05 AM Links to this post