HAWAIIAN ELECTRIC CO. will raise rates on homes that don’t have solar panels in order to make up for lost revenue for those who have installed solar, according to stories in today’s Pacific Business News and Honolulu Star-Advertiser. Big Island rates could go up an average of $10 a month, or 1.7 cents per kilowatt-hour. According to the stories, customers statewide installed so many photovoltaic panels connecting to HECO’s grids that they provided up to 30 megawatts of electricity, the same capacity as a big wind farm on O`ahu. This led to savings for those owning photovoltaic systems but a loss to HECO of $7.4 million. HECO claims it needs to raise rates so it can pay for meter readers, distribution lines and other costs. The Star-Advertiser reports Public Utilities Commission chair Mina Morita saying that raising rates with this argument is “not equitable. It’s something the Commission will have to look at closely.”
To remove HECO from its obligation to move into alternative energy while still providing profits to shareholders, a bill in the state Legislature would take the utility out of the energy production business and leave it with its power distribution network, for which electric users would pay.
THE HAWAIIAN ISLANDS HUMPBACK WHALE SANCTUARY could be expanded to include not only protection of humpback whales but the entire ecosystem. The recommendation comes from the Hawaiian Islands Humpback Whale National Marine Sanctuary Advisory Council.
The recommendation is part of the sanctuary’s proposed management plan and comes out of reports presented to the council from working groups that have been considering new strategies to better inform sanctuary management. The sanctuary is engaged in a process to review, evaluate, and update its management plan and will release a draft management plan for public comment in 2013. The sanctuary is managed by the National Oceanic and Atmospheric Administration and the Hawai`i state Department of Land & Natural Resources.
Recommendations for management include consideration of special management areas and vessel speed limits, as well as increased collaboration with communities and state and federal agencies. The proposed management approach would consider the whole ecosystem, including humans and the environment, rather than managing one resource or issue in isolation. “These management recommendations are a monumental achievement and a first for the Hawaiian Islands Humpback Whale National Marine Sanctuary Advisory Council,” said Dr. Adam Pack, council chair and an associate professor at University of Hawai`i-Hilo.
Gov. Neil Abercrombie said he supports “a management plan review process that takes into account our need to assess the biocultural resources of Hawai`i so that we can ensure use and enjoyment by residents and visitors now and into the future. As co-manager of the sanctuary, the State of Hawai`i is committed to an open, public process that fully considers the uniqueness of Hawai`i’s people, culture and environment, including the needs and perspectives of different islands and communities,” said the governor.
Dr. Malia Chow, sanctuary superintendent, said, “We encourage the public to stay involved and continue to participate in shaping the future direction of the sanctuary.”
“An ecosystem-based approach would allow the sanctuary to better support community efforts to protect and sustainably use their natural, cultural, and historic resources, and would also complement the current efforts of the DLNR that are aimed at the holistic management of our watersheds,” said Elia Herman, state co-manager of the sanctuary.

A STUDY GROUP THAT IS TOUGH ON most schools around the country has given the Hawai`i public school system poor marks in teaching science. The Fordham Institute is a conservative think tank that graded Hawai`i and 16 other states with a D for “content, rigor, clarity and specificity in their science standards,” according to a story in this morning’s Honolulu Star-Advertiser by Mary Vorsino. The report was particularly negative about high school science classes, saying the study found “only rare islands of content floating in a sea of omission, confusion and plain inaccuracy.”
Fordham gave ten other states an F in science, while 11 states scored C’s. Thirteen states, along with the District of Columbia, earned A’s or B’s in teaching science.
The Star-Advertiser story quotes Derrick Tsuruda, science educational specialist at the Hawai`i state Department of Education, as saying, “Anybody getting a D on a report card for anything would be disappointed.” He told the Star-Advertiser, “I think we’re going to have to look at, based on this report, a review of the (science) standards.”
The report gave better marks for elementary school science classes than high school science classes in Hawai`i. See www.edexcellence.net for the complete State of the State Science Standards report by the Thomas B. Fordham Institute, with it mission of “Advancing Educational Science.” 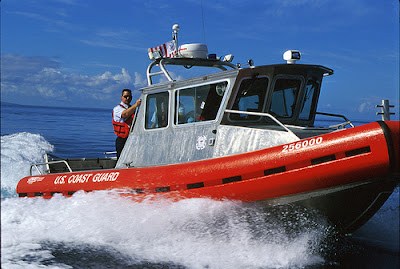 THE COAST GUARD AND HAWAI`I COUNTY, along with Maui County, will coordinate more closely during search and rescue missions. The mayors of the counties and Rear Adm. Charles W. Ray signed an agreement last week. The agreement sets up coordination between local fire departments, Ocean Safety, the Joint Rescue Coordination Center Honolulu, and the Coast Guard Sector Honolulu for civil and military search and rescue missions.
A statement from the Coast Guard said it helps responders to “fully leverage each organization’s unique assets, capabilities, and local knowledge while conducting SAR missions.”
“This agreement offers benefits to both local and federal responders,” said Lt. Cmdr. Matt Derrenbacher of Sector Honolulu. “But the real benefits go to the citizens who live in and visit the Hawaiian Islands. We’re here to serve the public by providing them the best rescue, response capabilities and coordination possible to save lives.”

Posted by The Ka`u Calendar at 4:20 PM Links to this post