INPUT ON HAWAI`I’S OCEAN RESOURCES MANAGEMENT PLAN is being taken by the state. A public meeting on a draft plan will be held on Tuesday, Oct. 23 at Hilo High School Cafeteria and Wednesday, Oct. 24 at Kealakehe High School at 5:30 p.m. with displays. A presentation begins at 6:30 p.m. The draft plan is available at hawaii.gov.
The draft points out that the recent surge in visitors to the island could lead to several more million tourist per year by 2014 and that the population of the islands could increase by 17.5 percent in the next 20 years. This could impact marine resources, including beaches, reefs and fisheries. 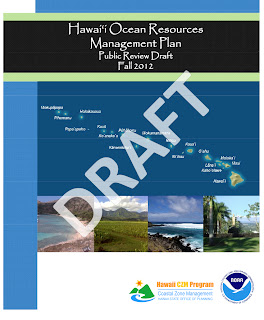 The introduction to the plan says: “When people talk about water, they are talking about a life source. With water, there is life. This includes the water coming down as rainfall at the top of the mountains, the waterfalls, the streams and rivers, and the ocean that surrounds Hawai‘i. The plan “discusses management of the ocean and coastal resources, including the water that feeds the ocean surrounding the islands.” It “examines the pressures on Hawai`i’s fragile ocean and coastal ecosystems, discusses conflicts on uses of ocean resources and ways to resolve them, incorporates sustainability into this planning document to preserve the ocean and coastal resources for future generations,” aligning with other statewide planning efforts as well as the National Ocean Policy.
The Ocean Resources Management Plan “acknowledges that just as economic growth is vital to Hawai`i, so too must its impacts be properly managed to preserve our natural resources and reduce conflicts among resource users. Protecting ocean resources requires taking a look at new directions and new integrated management approaches. The ocean’s carrying capacity is unclear, yet exceedingly important. Reliance on outside sources for food, energy, and economic activity erode the once sustainable lifestyle on the islands.”
A statement from Jesse Souki, who is an attorney and state Office of Planning Director, says “the collective vision guiding the Ocean Resources Management Plan is connecting land and sea; preserving our ocean heritage; and promoting collaboration and stewardship.” He says the five –year update of the plan is “much more than a legal requirement. The update is the culmination of feedback from several meetings, where coastal and marine resource management priorities for the next five years were discussed among county, state and federal agencies; non-governmental organizations; and several communities across the state. It is a living document that articulates and addresses the needs and concerns of Hawa`i’s people, as it relates to coastal and marine resource management.”
Souki says the plan will “help the State of Hawai`i to be effective managers and stewards of coastal and marine resources. The plan is not intended to identify every possible coastal and marine management concern or foreclose management options.”

KA`U CHAMBER OF COMMERCE sponsors a Police and Fire Department Child Safety presentation Saturday from 1 p.m. to 3 p.m. at Na`alehu Community Center. Policemen and firemen will teach children how to stay safe during Halloween. Keiki ID will also be handed out, along with refreshments. For more information, call 939-8449.

THOSE INTERESTED IN FREE AGRITOURISM WORKSHOPS through the Hawai`i Agri-Tourism Association are urged to attend an organizational meeting this Saturday from 2 p.m. to 3:30 p.m., at Pahala Community Center. Information will be provided on scope and timing. Those with agri-tourism potential in Ka`u can sign up for the workshops, which are funded by a U.S. Department of Agriculture grant.
“The intention of the trainings is to help build economic development for the Ka`u agricultural community and it’s partners,” says Hawai`i Agritourism Association Executive Director Lani Weigert. For more, visit hiagtourism.org. Those interested in attending can reserve a seat by emailing lani@hiagtourism.org or calling (808) 283-3777. 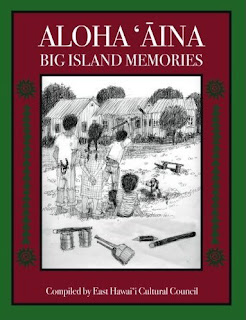 TWO KA`U RESIDENTS are featured in the new book Aloha `Aina: Big Island Memories, to be released at a Premier Reception this Sunday, Oct. 21 from 2 p.m. to 4:30 p.m. at East Hawai`i Cultural Center in Hilo. The story of the late Ka`u paniolo and sugar worker Edwin Garcia “Gus” Villanueva describes life of the Puerto Rican sugar worker families. The story of Elleanora Jerusalem “Ella” Louis tells of her experience growing up in a Filipino and Portuguese family in Pahala. “These works are rich soil, gentle rain, dashing waves, skittering clouds, pulsing sunshine, cool cave darkness and tumbling earth – all told in the voices of people who have lived Hawai`i’s abundant natural drama,” said Randal McEndree of Hawai`i Community College.
Illustrators of Aloha `Aina: Big Island Memories include Kathleen Kam, known for murals in Ka`u at Punalu`u Bake Shop and Ka`u Coffee Mill, in Volcano at Kilauea General Store and in downtown Hilo at KTA.
To reserve a copy of the book, call East Hawai`i Cultural Center at 961-5711 or contact arts@chcc.org. It is also available on amazon.com. All proceeds support arts at East Hawai`i Cultural Center. 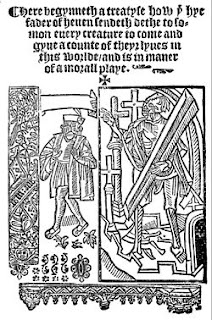 AUDITIONS FOR THE AWAKENING OF EVERYONE will be held this Saturday, Oct. 20 from 2 p.m. to 4 p.m. and Sunday, Oct. 21, from 4 p.m. to 6 p.m. at Pahala Plantation House. The play is a modern revival of the 15th century Greek morality play The Summons of Everyman by Anonymous. It will be performed locally in early December.
The play is a University of Hawai`i Drama Department Production by writer and director Juliana Dobbs, of Wood Valley. No experience is necessary to perform in this play. The original play had strong Catholic intonation while the rewrite by Dobbs is non-denominational “designed to appeal to all faiths and faithless folk. The message is about the fear of death, how transitory life is and finding spiritual truth at the hands of death. Upon death’s calling, everyone is abandoned by everything they held important in life,” said Dobbs.
The cast requires about 15 characters. Rehearsals will be held for about two hours, three times a week until production. Not all cast members will be required to attend all rehearsals. Call 928-0007 for more information.