THE EARTHQUAKE SWARMS in late February on Kaoiki Pali may be linked to changes in pressure within Kilauea’s magma system, say scientists studying it. With Kilauea’s ongoing eruption and Mauna Loa’s unrest, “many forces have been at play,” says the latest edition of Volcano Watch from Hawaiian Volcano Observatory, which says, “We can probably expect more of these earthquake swarms.”
HVO scientists explain that the south part of this island is “subject to forces arising from the movement of magma and forces arising from gravitational breakdown of its volcanoes.”
Kaoiki Pali extends from west of Namakanipaio Campground all the way to Honu`apo. The Kaoiki-Honu`apo fault system was likely created by subsidence of Mauna Loa’s southeast flank before Kilauea was built against or on it. The surface expression of these faults is seen in stepped terrain just mauka of Highway 11 between Kilauea’s summit and Pahala. The steps are draped by unbroken 9,000-year-old lava and their movements are too minor to result in surface rupture despite earthquakes centered there, say the scientists. The recent swarm reaffirmed this with the lack of any shift of the ground surface during the quakes, according to HVO.
The entire southeast flank of Mauna Loa frequently hosts earthquakes as it is squeezed and stretched between two very active volcanoes. HVO records show four damaging earthquakes in this area between 1941 and 1983, but none since. Earthquakes in 1974 and 1983 are believed to have enabled Mauna Loa's eruptions in 1975 and 1984. The recent swarm included two quakes above 4.0 magnitude.

THE STATE SENATE VOTES today on whether the Office of Hawaiian Affairs can accept a $200 million urban property on O`ahu in exchange for settling ceded land claims. Ceded lands are claimed as belonging to native Hawaiians but being held by the state. Some of those lands on the Big Island are in Hilo, where hotels are located on Banyan Drive. The settlement would end the OHA suits to claim the Hilo and other lands around the state and settle for the city land in Kaka`ako. If ultimately approved, this agreement will finally resolve claims relating to OHA’s share of public land trust revenues from November 7, 1978 to June 30, 2012.
THE COUNTY BUDGET proposed by Mayor Billy Kenoi has been analyzed by Stephens Media reporter Peter Sur. He notes that “the county Civil Defense Agency is getting its budget slashed from $1.7 million to $1.2 million, a difference of 26.4 percent. The Mass Transit Agency’s budget is shrinking 15.5 percent, from $4.0 million to $3.3 million, and the Office of Aging’s budget is falling from $2.9 million to $2.3 million, a difference of $550,073, or 19.1 percent. Departments with more funding for the fiscal year that begins July 1 include Office of Elections with an 11.6 percent increase to $888,674.The County Council, County Clerk and staff would enjoy an increase of 5.1 percent to $3.3 million. The Police Department budget goes from $53.8 million to $54 million, while the Fire Department rises 1.8 percent, to $37.3 million, reports Sur in West Hawai`i Today this morning. See www.westhawaiitoday.com.
County Council chair Dominique Yagong, who is running against Kenoi in the August primary, said he is studying the budget and has a number of objections that he will discuss at the Council.
THE NEW FUEL SURCHARGES took effect last week with steep increases that are causing a rise in the cost of imported food. According to a story in Pacific Business News, “Matson charges a base fee of $2,398 to ship a 40-foot container of rice from the West Coast to Hawai`i. Tack on that 45.5 percent fuel surcharge and the cost rises to $3,489, a $1,091 increase.” Young Brothers plans to review its fuel surcharges in May.
UNIVERSITY OF HAWAI`I-HILO has a new vice chancellor of Student Affairs. Dr. Matthew Platz joins the staff in January of 2013. Platz comes with a career as a chemistry professor and administrator at Ohio State University. He said he found UH-Hilo’s mission of encouraging students, particularly first-generation students, to reach their highest level of educational attainment “compelling,” noting that higher education had been a game-changer in his life. “I have had a wonderful life because of my dad’s decision to attend night school and become a first-generation college graduate,” Platz said. “So I know first-hand how the power of education can alter the destiny of a family.”
In his current position with the National Science Foundation, Platz has focused on funding the basic science that must be discovered to create sustainable food, water and energy to meet the needs of the world’s expanding population.

A FREE CONCERT takes place tomorrow at Pahala Plantation House from 6:30 p.m. until pau. Composer and musician Bolo, who sings and plays the `uketar, `ukulele and slack key guitar, offers original songs, including Bull Kailiawa Coffee Farmer, a song about the original Ka`u Coffee farmer back in the 1800s and a composition he co-wrote about the mountain Kaiholena. Musician and dancer Sammi Fo will join him. 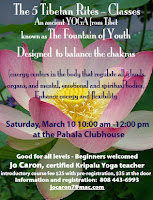 HAWAI`I WILDLIFE FUND’S Ka`u Beach Cleanup is scheduled for Saturday. Volunteers can sign up with Megan Lamson at 769-7629 or kahakai.cleanups@gmail.com.
THE FIVE TIBETAN RITES are the topics at a workshop on Saturday from 10 a.m. to noon at the Old Pahala Clubhouse. Certified Kripalu Yoga teacher Jo Caron explains the background of the Rites and their effects on health, as well as postures. Tea and fruit will be served after the workshop. All levels, including beginners, are welcome. Pre-registration is $25, or $35 at the door. Call 443-6993 or email jocaron7@mac.com.

Posted by The Ka`u Calendar at 9:52 AM Links to this post