VETO THE COUNTY BUDGET is what Mayor Billy Kenoi did yesterday, charging that the County Council illegally changed it. He said that the council illegally reduced the Two-Percent land fund that puts money into the Public Access, Open Space and Natural Resources Preservation Fund in order to purchase land for conservation, protection of natural resources, historic sites and creation of parks. The Council attempted to lower the income of the fund to 1.5 percent of county tax revenues. In his budget veto message, Kenoi said that Hawai`i County Code “clearly requires that two percent of county tax collections must be deposited into the PONC fund annually. Corporation Counsel therefore advises Finance Director Crawford that this council budget amendment appears to violate the County Code.”
REFUSING TO INCREASE BUDGET RESERVES is another charge against the County Council made by the mayor in his budget veto message. “We recently witnessed dire events overseas with impacts that rippled out to affect our local economy, ranging from the Great Recession of 2007-2009 to the tragic March 11, 2011 tsunami that devastated parts of Japan. Those events dramatized the need for a budget reserve fund to stabilize county finances during challenging economic periods. With those risks in mind, our administration’s budget set aside $2.8 million in anticipated labor savings from collective bargaining to build up the county’s budget reserves. The Council disregarded that proposal, and instead amended the budget to spend the entire $2.8 million immediately, saving none of those funds for later. This is unwise because it fails to set aside additional reserves for what may be challenging times ahead. It is also risky, because this $2.8 million the Council proposes to spend may not materialize. Depending on the outcome of statewide collective bargaining later this year, the labor savings could be smaller than we have projected. That is one important reason we urged the council to be cautious, and to place these funds in a reserve fund for the future. Unfortunately, the Council refused,” Kenoi said.
COUNCIL ACTIONS VIOLATE SEPARATION OF POWERS, the mayor’s veto message claims. He said the Council’s budget would increase overall county spending “beyond what our administration proposed.” He said the Council shifted spending rather than cut it and “fabricated” a Council Adjusted Expense Account, and he called it unprecedented in state and county government in Hawai`i.


DEFERRING PAYMENTS FOR HEALTH OBLIGATIONS FOR COUNTY RETIREES was defended in the mayor’s veto message. He said that the payments have been made for four straight years ahead of time “like prepaying a mortgage.” Deferring the payment until it is due would not make the county late on any bills. The state does not pay ahead, and the City and County of Honolulu is also deferring the payment, he pointed out. The Council objected to deferring payments and changed the budget in order to make the payment, the mayor stated.
AT ITS MEETING YESTERDAY, the County Council authorized the acquisition of private property by eminent domain for the Ocean View Recycling and Transfer Station. The property contains 21.6397 acres just off the makai side of Hwy 11, on the Kona side of Kona Drive and across from Iolani Lane. It is currently appraised at $248,000. 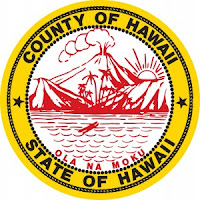 THE COUNTY COUNCIL also approved the establishment of a sister-city relationship with Ormoc City in the Philippines. Mayor Kenoi and the mayor of Ormoc City are expected to sign the agreement in September. Council member Brittany Smart, who proposed the program, is interested in the island’s use of geothermal and hydroelectric energy. “There is a lot to learn from our Filipino friends,” she said.

THE KA`U CHAMBER OF COMMERCE meets today at 5 p.m. at the Na`ohulelua historic garden on Kama`oa Road. The Chamber will be accepting applications from potential board members, especially from people who own or operate businesses in Ka`u.

A TOUR OF THE KEAUHOU BIRD CENTER takes place tomorrow from 9 a.m. to 11 a.m. The Friends of Hawai`i Volcanoes National Park sponsor this tour of the center, which is not open to the general public. Pre-registration is required by calling 985-7373.

Posted by The Ka`u Calendar at 10:04 AM Links to this post