VOLCANO SHOULD BE PART OF KA`U OR PUNA? Two views emerged last night at the County Reapportionment hearing in Na`alehu on where to draw voter lines for each County Council district.
Linda-Jane Irwin, of Volcano, recommended that “Volcano Village should be a part of Ka’u," saying she and many of her friends relate more to the people of Ka’u. She noted that “Hawai`i Volcanoes National Park is an International Biosphere Preserve, and it's very likely that buffer zones in the surrounding communities will be designated soon to further protect native wildlife.” With park borders on both sides of Ka’u, Irwin said Volcano would be more suited to be aligned with the rest of the likely buffer zone communities in Ka`u.
Rick Warshauer, of Volcano, testified that “Volcano belongs in Puna.” He said he worked on the Puna Community Development Plan and noted that the plan extends from Puna to Volcano Golf Course and asks for more consistency in county planning. Commissioner Jeff Melrose responded, saying Puna has grown too much in the last ten years, which is why adjustments must be made to the boundaries of county council districts.
Each district may contain no more than 21,483 people (not including students and non-resident military personnel) and no less than 19,441. Warshauer contended that Volcano is not the only area for adjustments to be made. He asked that Volcano stay part of Puna and that Kea’au and other areas closer to Hilo be used for adjusting. “Don’t split it up. Don’t split up Volcano and Puna”, he said.
Since few people attended the meeting, Comissioner Dru Mamo Kanuha said “people in Na’alehu don’t seem to be that concerned about the redistricting.”
The last public hearing closest to Ka`u will be held in Captain Cook at Yano Hall at 6 p.m. on Thursday Oct. 20. Submit testimonies to keoff@co.hawaii.hi.us. View proposed redistricting maps athttp://www.co.hawaii.hi.us/council/reapp/index.htm. Call Commission Secretary Karen Eoff at 323-4264. 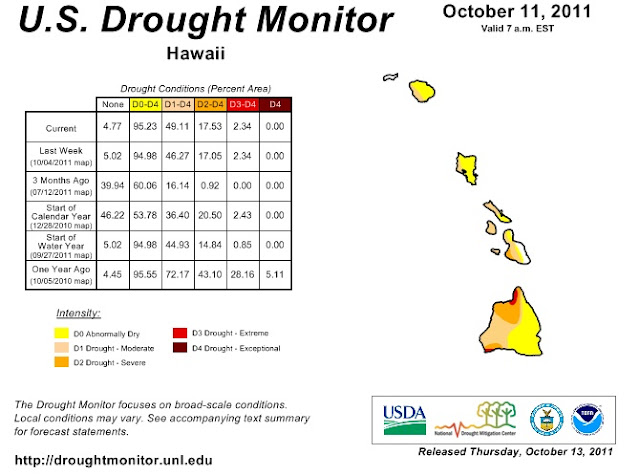 THE U.S. DROUGHT MONITOR released this morning by U.S. Department of Agriculture shows conditions in Ka`u ranging from Extreme to Abnormally Dry. The most Extreme drought is in the South Point area coming up the coast toward Honu`apo. Severe drought affects land inland from South Point and Moderate drought covers the rest of Ka`u with the exception of an Abnormally Dry area towards Volcano. North Kohala and the South Point areas are the only places in the state with Severe Drought Conditions.
FORMER TWO-TERM HAWAI`I GOV. LINDA LINGLE is the National Republican Senatorial Committee's top recruit, the Capitol Hill newspaper Roll Call said this morning. Lingle announced this week that she will run for the U.S. Senate seat to be left vacant by Dan Akaka who will retire at the end of his term. After winning the Republican nomination, Lingle would likely face either Mazie Hirono or Ed Case, two of the Democrats campaigning for the same U.S. Senate seat. Lingle, 58, was the first woman governor for Hawai`i and the only Jewish governor in the U.S. while in office. In 2006 she won her reelection bid by the largest margin in state history. Lingle was chosen to accompany Pres. George Bush to Jerusalem in 2008. She is also known for encouraging Bush to create the largest marine preserve in the world in the Northwestern Hawaiian Islands, which he accomplished by making the 140,000 square miles of ocean and ten islands and atolls into a National Monument in 2006, called Papahanaumokuakea.

HAWAIIAN ELECTRIC CO. is blaming the cost of fossil fuel for the record-breaking increase in electric bills during the last quarter. According to an Alan Yonan, Jr. story in the Honolulu Star Advertiser this morning, HECO executive vice president Robbie Alm said: “This situation again highlights how important it is to get off oil as completely and quickly as we can. It is exactly for this reason that we are pursing renewables on all fronts with a new push for geothermal, a nationally ranked solar program, more wind farms and biofuels."

KA`U HIGH, PAHALA INTERMEDIATE & PAHALA AND NA`ALEHU ELEMENTARY schools may get a reprieve from strict federal school restructuring requirements. The state Department of Education has notified the U.S. Department of Education that it will apply for ESEA Flexibility for Spring 2012.
“Hawai`i is taking another bold step forward to accelerate education reform, raise accountability, and ensure all students graduate college- and career-ready,” Superintendent Kathryn Matayoshi said. “ESEA Flexibility will provide states with a rigorous alternative to the current No Child Left Behind one-size-fits-all approach and the responsibility to redefine academic success beyond Adequate Yearly Progress.”
The DOE promises to engage and solicit input “from diverse stakeholders and communities in the development of its request,” says its press release.

GOV. NEIL ABERCROMBIE has joined governors from Guam, the Northern Marianas and several states on a mission to the U.S.-China Governors Conference in Beijing. The forum focuses on economic development and job creation. U.S. Ambassador to China Gary Locke is expected to host a reception for the governors. Just last week, Hawai`i Volcanoes National Park hosted representatives from the National Parks in China, following a visit of U.S. National Park representatives to China. The Chinese park representatives explored Kahuku and Volcanoes sections of the park. In Pahala, they dined on food raised here and took home Ka`u Coffee.

A BILL LIMITING FREE WATER FROM COUNTY SPIGOTS TO 55-gallons per visit has been withdrawn from County Council consideration by Mayor Billy Kenoi and Department of Public Works Director Warren Lee. The bill would have imposed a maximum $500 fine on violators. Public Works Director Warren Lee said he wants community input on how much water is needed by families before resubmitting the bill. The county recently installed a new spigot system for the public in Wai’ohinu and the Ocean View public water system with spigots is scheduled to open soon.

THE ANNUAL MONGOLIAN BARBECUE at Cooper Center on Wright Road in Volcano will be Saturday from 5 p.m. to 8 p.m. The fundraiser features 14 masters of the wok. Volunteers are welcome Friday at 8 a.m. at Cooper Center to help with chopping of the ingredients.