RANCHERS AND FARMERS are more productive than ever and providing a solid economic foundation for the country, American Farm Bureau Federation president Bob Stallman said yesterday.
He was addressing the national organization at its annual meeting in Honolulu, where 7,000 members have gathered. Convention attendees include at least one Ka`u farm, Aikane Plantation Coffee Company, whose owners Phil and Merle Becker are promoting Ka`u Coffee at the Farm Bureau trade show this week. 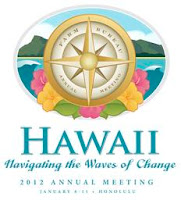 In his opening address, the Farm Bureau president called farmers and ranchers “the one percent that is producing food and fiber for the other 99 percent.” Farm and ranch families are growing more food with fewer resources than ever before, Stallman said. Through better management, yields are up, soil loss fallen, and water use down in all major crops, he said. Stallman also extolled the record-breaking growth in U.S. agricultural exports over the past year.

CATCHING UP WITH DEFERRED MAINTENANCE in public infrastructure is a way to put construction workers back on the job, according to state senators and the governor, who are proposing large capital improvement budgets. Materials costs are low, interest rates are low, and the state has the ability to float bonds to pay for it, they say. Carl Bonham, executive director of the University of Hawai`i Economic Research Organization, told the Honolulu Star-Advertiser: “We have underspent on infrastructure, just like the rest of the country, for decades and decades. And so there’s things that need to be done. You need your roads fixed. You need your schools not to be falling apart. So it’s not a real tough decision, and at the moment we still have very aggressively low interest rates.”
Ron Taketa, executive secretary and treasurer of the Hawai`i Regional Council of Carpenters, told the Star-Advertiser that half of the union’s 6,500 workers have been unemployed for several years during the economic slump. He called public sector construction to fix Hawai`i’s infrastructure “an important part of trying to kick-start the economy again.” During “a slowdown like now when private investments are down, we really count on government to try and pick up some of the slack, to try and keep people working,” Takata told the newspaper in a story by Derrick DePledge.
Gov. Neil Abercrombie has proposed $300 million in projects, and the Legislature is looking at $500 million, but the two budgets could be combined during the upcoming 2012 state Legislature.

THE $17 MILLION FEMA DISASTER SHELTER and Ka`u High School gymnasium Environmental Assessment process is accepting comments from the public through Tuesday. PBR Hawai`i, of Honolulu, has the contract to write the EA for the 40,000-square-foot facility. Subjects under discussion are the extent of required, paved parking; parking lot lighting; photovoltaics and design of the gym to fit in with the town. Planners are considering an NCAA-sized basketball court plus a smaller court that can be converted into multiple volleyball courts. The facility could also be used for major community events. Comments can be addressed to tkapali@pbrhawaii.com or PBR Hawai`i, Tammy Kapali, 1001 Bishop Street, Suite 650, Honolulu, HI 96813-3484.
MARIE BURNS is running for County Council again, she told The Ka`u Calendar yesterday. Burns, who is involved with a group of people in Ocean View who are tracking and suggesting action projects for the Ka`u Community Development Plan, is a arborist and tree trimmer. She also has a degree in Hawaiian studies from University of Hawai`i in Hilo. She lives in Ocean View. Other candidates who have announced are Lee McIntosh, of Discovery Harbour, and three-time councilwoman Brenda Ford, whose South Kona District moved north, leaving her home with the voters from Kainaliu to Fern Forest.
Burns has questioned the proposed hotel, condominium and golf course resort at Nani Kahuku `Aina and called for preserving historic sites and planting more native trees in Ka`u. She has supported expanding the public park at Punalu`u and other initiatives to preserve the Ka`u Coast.
Burns ran in the last County Council election in 2010. Brittany Smart, who won that race, has announced she would not run this time for personal reasons.

FIVE-YEAR MULTIPLE ENTRY TOURISM VISAS for the Chinese and longer stays for Canadian retirees could bring in an additional 300,000 visitors a year to Hawai`i, says congresswoman Mazie Hirono.
Reaching across party lines, she has co-introduced the Visit USA Act with Republican congressman David Drier, of California.
Visas for Canadian retirees would be extended from three-month stays to eight-month stays.
Chinese visitors currently receive multiple entry visas good for a year, and it takes about 48 days to get them. Hirono’s proposal calls for faster processing, paid for by extra fees. Lower fees could attract more visitors during the off-season. Hirono has also asked for a video-conferencing pilot program when interviewing visa applicants to speed up visa approvals. Hirono predicted that easing the visas will “infuse a lot of money into our economy.”
Hawai`i Tourism Authority president and CEO Mike McCartney said that easier visas could lead to 6,000 jobs and $55 million in state tax revenue. Roy Yamaguchi, a Brand USA board member, supported the legislation in the face of other countries that “are aggressively pooling their national resources and staking a larger claim in the international tourism industry.”

RENEWING DRIVER'S LICENSES as well as applying for the first time will soon require a whole lot of papala. The Legal Presence Act goes into effect March 5 and requires everyone to prove they are U.S. ciizens or otherwise legally authorized to be in the United States. The law was passed by the 2010 Hawai`i Legislature. The Legal Presence Act also allows the state to issue drivers licenses only for the length of time a person is allowed in the United States. The law also applies to those seeking a learner’s permit and permit holders passing road tests to obtain driver’s licenses. Legal presence also applies to anyone who has just moved to Hawai`i from another state or country, and anyone renewing their Hawai`i driver’s licenses or permits, including those whose licenses expired or were revoked or suspended. The announcement was made by state Department of Transportation spokesman Dan Meisenzahl yesterday. He said that Hawai`i is only complying with Real ID federal security law. “Tell your friends, tell your family,” Meisenzahl said. “It kicks in in two months, but will be impacting people for years.” He explained that the federal law requires states to replace their driver’s licenses and ID cards with more secure documents, which the federal government will also require before allowing people to board airline flights and enter federal buildings. Applicants will have to provide a Social Security card and at least one of several other documents, such as a birth certificate or a valid U.S. passport. Married women who have changed their last names will also have to provide a valid or certified copy of their marriage licenses.

USGS HAWAIIAN VOLCANO OBSERVATORY geologist Matt Patrick will present an overview of Kilauea’s summit eruption, including a survey of the volcanic processes occurring within the vent in Halema`uma`u Crater, at After Dark in the Park tomorrow at 7 p.m. at Kilauea Visitor Center Auditorium. $2 donation supports park programs, and park entrance fees may apply.